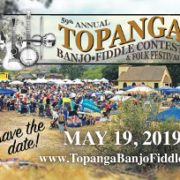 On to the 2019 Festival Season 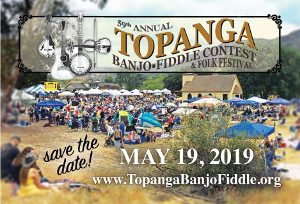 The October Santa Barbara Old-Time Fiddlers Convention and Seaside Highland Games in Ventura signal the end of the festival season for the year – and the beginning of planning for 2019. As the talent coordinator for the Topanga Banjo Fiddle Contest and Folk Festival in May (always the third Sunday), my task is to put together a music program that fits with the festival’s mission. While there is no shortage of bands each year who want to play, there is often a mismatch in expectation that is frustrating for both sides. This may be a good opportunity to explain what the festival is looking for. Demand for stage slots outstrips availability several-fold, but we are also looking for workshops, dance instructors/bands for the dance barn, other activities, really any new ideas in November/December/January.

The Topanga Banjo-Fiddle Contest (TBFC) started in 1961 as a small contest in Topanga Canyon and audience participation remains a key element to this day (contest, workshops, jamming, dancing). TBFC is one of the oldest continuously held traditional music and folk arts festival in the US, run by an all-volunteer non-profit organization. TBFC outgrew its original location in Topanga quickly and has been at the Paramount Ranch for the last 25 years. The Paramount Ranch, one canyon over from Topanga, has been used for movies since 1927 and now is part of the National Park Service.

While the old movie ranch makes for a lovely festival site, it doesn’t make for a cheap site: Everything needs to be brought in for the festival, stages, sound, chairs, shade, and many, many porta-potties. The board of directors (of which I am not a member) has a difficult balancing act each year to ensure the viability of the event in the long-run. Most traditional music festivals or contests tend to be ephemeral events and are quickly forgotten, so going for the 59th version of the TBFC in 2019 is by an impressive achievement. John Bryan made a documentary of the 50th festival and it conveys the feel of the event well and what sets it apart from others.

There are two goals on the music end. First, it needs to attract a general audience that isn’t inherently drawn to old-time, Irish/Scottish, bluegrass, folk singing and needs to be an attractive alternative to whatever else people might do on a Sunday. But once people come – and there are 5000 or so each year – we want them to get interested in traditional and acoustic music styles to build new (and more knowledgeable) audiences. Second, the event also needs to remain attractive to people who are already involved in traditional music and offer something to them as well: contest, jams, etc. I guess about 1000 people playing instruments show up at the festival each year. Distinct goals, but most scheduled performances (for which I am responsible)  are for the first group, the “lay audience.”

The routine this month is that I wade through all the material and applications that come to TBFC and also do some outreach. For competitive slots, I compile candidates for scheduled performances; the board of directors makes the decision from my short list. There are four performance slots on the main stage, Six to ten on the other stages (it changes over the years depending on the contest schedule), and another five to ten workshop/dance/unamplified spots. The mainstage has been in the $500-1000 range per slot, all others are $100. Of course, who wouldn’t want to have a bigger budget, but that is the constraint that I have to work with.

How do you get on the list? Give me something that stands out of the hundreds of electronic media kits and the chance for a stage slot is really good. A big limitation is that we don’t get too many suggestions that fit with the theme of the festival, but rather hundreds of “me and my buddies want to play our stuff on your stage and we want you to pay us” applications. It really is about fit. Use your creativity and think what could be done to make a stage slot at TBFC more interesting than what you would do at a street fair or a coffeehouse/pizza parlor gig. If you missed out this year, send things at the end of  2019 for 2020 to [email protected]  topangabanjofiddle.org

If you have a) an interesting title (not just a band name) b) one paragraph bio and another one describing how your slot fits with the goal of the festival, c) a small photo, and d) a link to complete soundclips (not “previews”) and YouTube videos that support the fit, that is all I need. If you send a CD, I will always listen to it, it will not be ignored and I will pass on good ones that aren’t a match with TBFC to other event organizers. I definitely pay more attention if you invested your time and money here than if somebody sends me a link to an electronic press kit.

There are a few constraints to remember. First, TBFC is about live music and performances. A workshop that requires electronics (for visuals or sound) is not an option. Second, TBFC has a “no electric instruments” rule. That is less of “purity” than a practical issue because there used to be a serious problem with people bringing car batteries and amplifiers to start jam wars, mostly a problem with bluegrass bands bringing an electric bass. That interfered with the contest and performances, so no electric instruments and scheduled performers have to set a good example. In addition to its practical side, I actually like this rule because it keeps TBFC differentiated. A generic world music indie-rock mash is, well, generic. There are lots of those already.

To keep the festival interesting, there needs to be some change or it will get very stale over time. So we always replace 100% of the main stage completely each year. More continuation on the other stages, but all new ideas are considered even when we do not follow up on them (and sometimes it just takes a few years). And let’s not forget that the organization itself needs change and refreshment. That includes all positions, including mine. I have been talent coordinator for well over a decade now and definitely want to hand it over to the next generation before it becomes 20 years.

ON TO THE 2019 FESTIVAL SEASON