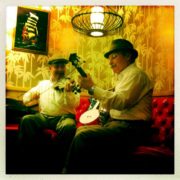 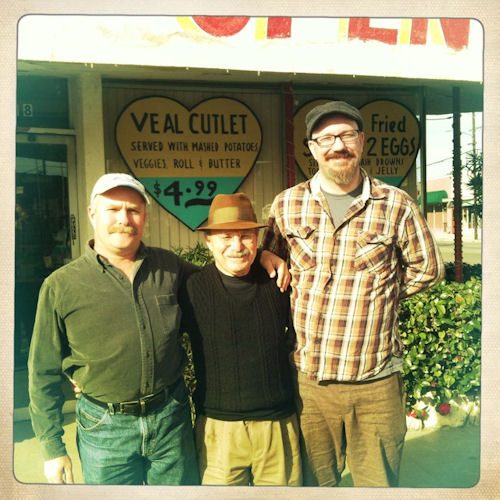 As an obsessive teacher and player of old-time music, it was about time for me to institute a location for secret (and not so secret) jam sessions, workshops and house concerts. For years, I’ve felt a strong urge to bring players, friends and students together where they can hear different perspectives and approaches to old time music through jamming, interacting and observing some of the best musicians in old time music today. The location: The Old Time Tiki Parlour in Los Angeles. Recently I’ve had the pleasure of hosting a multitude of Sausage Grinder-led jam sessions as well as workshops in fiddle and banjo by artists such as Cajun master David Greely and OT funk maestro Dan Gellert. Later this year we’ll be hosting a banjo workshop by Bob Carlin during the week of the Los Angeles Old Time Social. A concert by ragtime guitar wizard Craig Ventresco is also in the works. This year things were recently kicked off with a concert by a very unique duo, The Kirk Sutphin and Bertram Levy Duo.

As many of you may know, these guys are the real deal. North Carolina musician Kirk Sutphin started playing at the age of eight with his fiddling grandfather as his great inspiration. After his passing, Kirk began learning from Round Peak legend Tommy Jarrell. Many consider Sutphin the great living link to that older Round Peak tradition made famous by Tommy Jarrell, Fred Cockerham, Kyle Creed, The Camp Creek Boys, Charlie Lowe, etc. His fiddling and banjo playing are infectious and I’ve admired him since I started playing. He also plays in the Charlie Poole and Oscar Jenkins styles of banjo too. Something not to be missed. 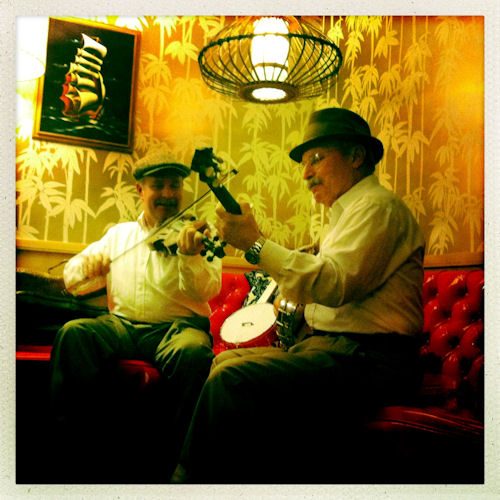 Bertram started playing banjo at the age of fourteen and later moved to the South and immersed himself in old time music. He was an original member of the great instrumental revival band The Hollow Rock String Band which brought the world the repertoire of WV fiddler Henry Reed. Together, the duo plays fiddle, banjo and concertina duets and solos. I’ve always loved hearing accordion/fiddle together from the very few recordings we have of fiddle/accordion duets like Mangrum & Shriver as well as from the home recordings of Ed Haley. Although not an accordion, the concertina is from the free reed aerophone  family of instruments like the accordion. Sutphin and Levy poured out some wonderful arrangements of fiddle/concertina duets that were hypnotic and mesmerizing, drawing from sources such as Henry Reed and Tommy Jarrell. Levy also plays an up the neck melodic banjo style that is powerful and very complimentary to Sutphin’s fiddling. Additionally, Sutphin played some duets on his Kyle Creed replica banjo made by Kevin Fore that brought the ghost of Fred Cockerham right into the parlour. Their CD can be purchased here. During their stay, I ran a camera or two before and after the concert. Here I present to you a clip of them playing Wesley’s tune. Enjoy.