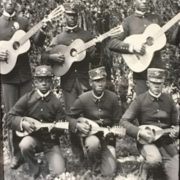 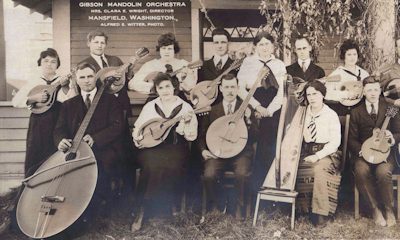 The mandolin became an iconic instrument in country music with the creation of bluegrass in the 1940s. Maybe because of instrumentation and nostalgic country lyrics in bluegrass, Bill Monroe’s musical invention is often mistaken for traditional folk or “old-time” music, rather than a contemporary of Bebop or electric blues and R&B. But if “Old-time” refers to late 1800s and early 1900s music popular in rural America, that was one or two generations before bluegrass. I searched for recordings of rural musicians before 1930 to get a better idea how this type of “old-time” mandolin sounded. Most of these musicians would have been born before 1900 and developed their style before radio or sound recordings. By 1930, the dynamics of traditional music had changed. Country music shows carried on “clear channel” stations that could reach much of the US shows, like the National Barn Dance or the Grand Ole Opry (1925), created a national market for country music and country music stars whose styles were copied. 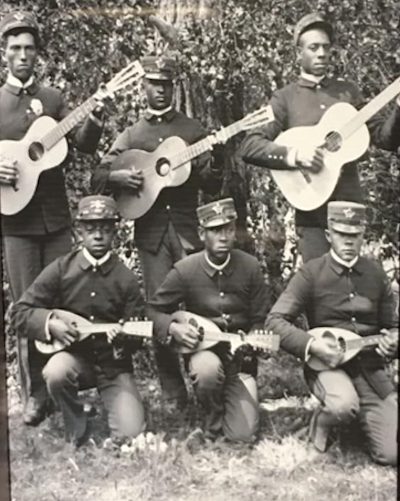 The mandolin experienced a popularity peak in the US between 1890 and 1920 and its portability and affordability would have ensured wide dissemination. Many photographs show mandolins in unexpected settings, as this photograph of black soldiers in 1900.

Their mandolins are still the European shape with a flat top and usually a rounded body created by strips of wood, the “taterbug” shape. In urban mandolin orchestras, those would soon have been replaced by Orville Gibson’s American design with carved top and back, releasing many instruments of the older and suddenly less desirable designs for use among less affluent musicians.

Sound recording technology developed later than photography. The first mandolin recording with an “old-timey” title I could find was from 1903, Samuel Siegel’s version of My Old Kentucky Home, a Stephen Foster song from about 1850. But that is a classical pop performance for a wealthy urban audience by a professional performer who toured internationally.

Partly because sound recording and reproduction was completely mechanical until 1925, recordings happened in a few large studios and favored performances with more sound pressure. The fiddlers Eck Robertson from Texas (in 1922) and John Carson from Georgia (in 1923) were among the first country/hillbilly/old-time performers to record. But they had to travel to New York first, making them unusual rather than representative cases.

Microphones and other electric recording equipment became available around 1925, allowed records have a better sound than radio, record softer instrument, and made recordings somewhat more portable. Recording companies then send their teams to capture the authentic music of rural America (and the South). There was a market: Carson’s recording of Old Joe Clark had sold more than a million copies. Before 1930, thousands of recordings were made during those trips, although none topped the success of Ralph Peer’s stop in Bristol, Tennessee, in 1927. That recording session found two future superstars: the Carter Family and Jimmie Rodgers. Three other record companies visited that area around the same time with less success.

Among instrumental recordings of that period, the fiddle rules undisputed as the lead instrument, whether solo or in string bands. The mandolin holds its own, although the style and material are different from the fiddle material, stronger blues and ragtime flavor. Eck Robertson and John Carson recorded hoedowns that are nowadays considered old-time standards: Arkansas Traveler, Old Joe Clark, Ragtime Annie, Sally Goodin, Forked Deer, Soldier’s Joy, Liberty. Those tunes eventually made it all into the mandolin repertoire, but only much later. Bill Monroe’s versions are from the 1960s, for example. In contrast, the mandolin recordings pre-1930 feature tunes with rag, stomp, blues in title. Often either three or just one different tune parts rather than two as common in fiddle tunes. More jazz/ragtime than Irish/Scottish reel. Fiddle-led string bands from the 1920s like the East Texas Serenaders played a similar style as mandolin-led groups and their music is also rediscovered (see my article on Rediscovering Ragtime!)

One of the mandolin-led bands was the Dallas String Band. They recorded every December between 1927 and 1929 when Columbia Records made a field trip to Texas. Little is known about the band’s leader and mandolinist, Coley Jones. He was probably born in the 1880s and played in medicine show type venues, but disappeared from history after the recording sessions. The other two regular band members were Sam Harris on guitar and Marco Washington on bass, whose stepson T-Bone Walker later became a pioneer of electric blues. Maybe the best known tune of theirs is the Dallas Rag. It is my favorite and apparently that of many others as well. Included in the fiddler’s fakebook and many sheet music versions on the internet as well.

Mandolinist Matthew Prater and guitarist Nap Hayes from Mississippi recorded under their names or as Blue Boys. One of their tunes that I and my daughter have in our repertoire is Easy Winner, a rag that takes material from Scott Joplin’s Entertainer but with enough changes to make it a different tune.

Aside from rags, their 1928 recording session in Tennessee also includes some blues. My favorite is when they joined with fiddler/singer Lonnie Johnson who later became more famous as a jazz guitarist. That is a masterpiece and definitely outside the range of “old-time”. Deep blues more like Robert Johnson, but also atypical for Prater/Hayes.

One of Lonnie Johnson’s life events has become more relevant to us a century later: He went on a long tour in 1917 that took him to Europe. Returning home to New Orleans in 1919, Johnson found that all of his family, except his brother James, had died in the 1918 influenza pandemic. Lonnie Johnson started his recording career in 1925 and by 1928 probably had 100 other recordings and was one of Okeh’s more prominent artists. While more of his earlier recordings are on fiddle, he now shifted more and more to guitar around that time. His collaboration with Eddie Lang as a jazz guitar duo also started then.

My last example is the Scottdale String Band from Georgia, just to show that there are exceptions to everything. The instrumental lead was taken by Charlie Simmons on mandolin (or banjo mandolin) and he was backed up by two guitarists, Barney Pritchard and Marvin Head. The group recorded about 30 sides between 1926 and 1930. Much of their repertoire includes rags similar in style to other mandolin-led stringbands (e.g. Carbolic Rag), but then they also recorded some seemingly Hawaiian tunes and a few tracks that fit the modern stereotype of “old-time”. Old Folks Better Go to Bed is just a standard version of Soldier’s Joy, played as a hoedown. Chinese Breakdown was also recorded for dancing with calls: