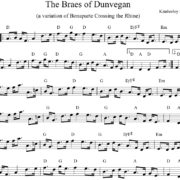 Sherman’s March to the Sea /
Braes of Dunvegan / Caledonian March

One type of tune that I haven’t covered in this column before are marches. Marches are often overlooked in favor of hoedowns/reels and jigs, but they do exist in all traditions. Since marches are not very fast, they are excellent for intermediate level sessions and yet are fun to play.

One march that got around a lot is Bonaparte Crossing the Rhine or Sherman’s March to Sea. In Europe, it seems to be known as Caledonian March. At the moment, here in Los Angeles, a variation of the tune is making the rounds as Braes of Dunvegan. There are at least 3 different sessions in town that play it regularly and it has become core repertoire of the Scottish Fiddlers of Los Angeles.

But I want to focus on the variation of the tune that is known as Braes of Dunvegan, which has a little twist in the B-part (a C-natural) that makes it interesting and I think also more appealing. The setting I transcribe below is how I learned it from Cape Breton fiddler Kimberley Fraser (see my column on Kimberley last year. 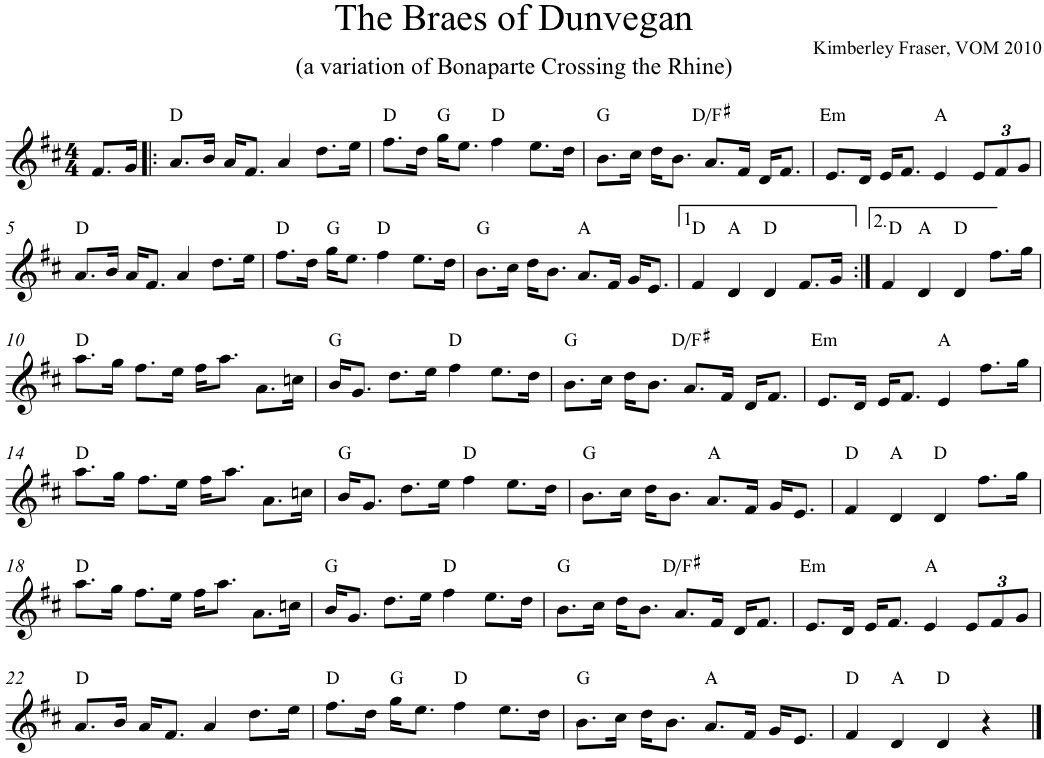 Not quite a session, a little more organized than that, but here are about 200 fiddlers playing Braes of Dunvegan, led by Kimberley Fraser

You won’t be able to recognize the faces in the video, but that group includes some of my favorite artists in the traditional music genre. I don’t know how often you would get such a group together and this list is far from complete (just can’t remember who else was there): In the cello group, there are Natalie Haas (duo with Alasdair Fraser), Tristan Clarridge (Crooked Still, and 5-times Grand Champion of the Weiser Old-Time Fiddle Contest), Mike Block (Yo-Yo Ma’s Silk Road Ensemble, Republic of Strings); in the fiddle section are Britanny Haas (Crooked Still), Hanneke Cassel (solo artist), Ryan McKasson (Syncopaths, McKassons), Lauren Rioux (Republic of Strings), and Weiser Grand Champions Kimber Ludiker and Tashina Clarridge.