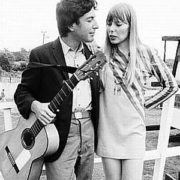 July 1 is Canada Day so I thought this might be a good time to recognize our neighbors to the North and spotlight two of my favorite Canadian born performers.

Poet, songwriter, and performer Leonard Cohen was born in Westmount, Quebec in 1934. Raised in an Orthodox Jewish home, his mother was a Lithuanian immigrant and his father, who passed away when Leonard was only 9 years old, was in the garment business.

In high school he immersed himself in music, poetry, and theatre, forming a folk group known as the Buckskin Boys. Moving on to McGill University in Montreal, he won the college’s literary competition and began to have other poetic works published, establishing his solid credentials as a writer.

In the 1960s he came to the US and focused on becoming a singer-songwriter. Impressed with his song “Suzanne,” Judy Collins was first to record it and many others followed. Here is a beautiful video of Judy Collins introducing him on the tenth anniversary of their meeting followed by a duet of his song “Hey, That’s No Way to Say Goodbye”

There is much that has been written about Leonard Cohen’s personal life, as well as his artistic success. Sadly, in 2004 it became known publicly that his friend and manager had stolen millions of dollars from him. This motivated him to embark upon a world tour to recoup his losses. It was a smashing success. When the tour arrived in Los Angeles, I was thrilled to finally see him in person, and it was absolutely one of the best performances I had ever seen in my life. This man was 100% on his game at age 75; he performed for more than two hours and was constantly moving on stage. While the LA performance wasn’t filmed as far as I know, here is an excerpt from the London performance that is exactly like what we in Los Angeles were privileged to see:

Leonard Cohen passed away on November 7, 2016, in Los Angeles and was buried in accordance with Jewish custom in his family plot in Montreal. His music will live in the hearts of his fans forever.

Joni Mitchell was born in 1943 in Fort Macleod, Alberta, the daughter of an RCAF flight lieutenant father and an Irish/Scottish mother who worked as a teacher. After World War II, the family moved to Saskatchewan, eventually settling in the town of Saskatoon. Young Joni was then recovering from the effects of polio, a disease she acquired at the age of 9. Even at a young age, she exhibited strong interest in the arts, enjoying painting, writing poetry, and she briefly studied classical piano.

Her next instrument was the ukulele; she then wanted to learn guitar, so taught herself using a Pete Seeger songbook. Her budding folk career was beginning to take shape and she achieved her first paying folk gig in Saskatoon in 1962.

In 2020 Joni released an archive of her work, beginning with “The Early Years” which included her 1963 acoustic performance of “House of the Rising Sun” on radio station CFQK in Saskatoon. The clarity and beauty of the voice that propelled her to popularity is showcased in this recording:

Joni Mitchell is known for her unique alternative guitar tunings. It may interest guitar players to know that one of the reasons that she developed many of them was a weakness in her left hand due to polio.

She brought her unique musical style first to Toronto and later to Detroit. Much has been writing about her time in various parts of the United States, but what has always held the most interest for me is the time she spent in Laurel Canyon along with such other legendary performers such as David Crosby, Steven Stills, Graham Nash, Mama Cass and many others who were equally well-known. There is a wonderful book about those days entitled “Laurel Canyon: The Inside Story of Rock and Roll’s Legendary Neighborhood” by Michael Walker. It was during this time that Graham Nash, who was living with Joni, penned “Our House,” and Joni recorded what is my personal favorite album “Ladies of the Canyon”. Here is the title track accompanied by several lovely photos of Joni:

Joni has had a number of health issues over the past few years, but she remains resilient, enjoying occasional outings with friends and making a public appearance in 2018 for her 75th birthday celebration where artists including as Graham Nash, James Taylor, Kris Kristofferson paid tribute to her by performing her songs. A second tribute concert featured Brandi Carlile performing Joni’s “Blue” album in its entirety. In October of 2019 she released a book of poetry and artwork entitled “Morning Glory on the Vine” which was originally something she had made available only to friends and family. Her most recent project has been working with Rhino Records create the second volume of “The Early Years” with a remastered version of her first four albums; it has recently been released and can be found here: https://store.rhino.com/artist/joni-mitchell.html

Another incredible artist and performer – Thanks, Canada!