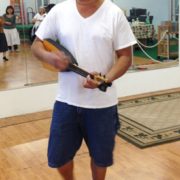 Notes from a Ukulele Lady 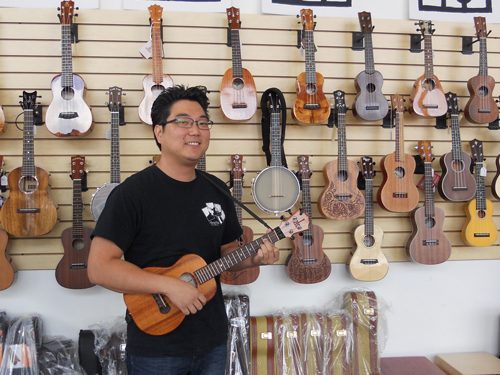 Time to confess! In my last column when I reported on the Los Angeles Uke Expo, I was not one hundred percent objective. You see, I play the ukulele. Three years ago I joined Uncle Lincoln Kaio’s ongoing Hawaiian ukulele class in Carson as an adjunct to my studies in hula at Halau O Lilinoe. I interrupted both avocations to spend two years completing a master’s program in music with a specialty in ethnomusicology. Since June I’ve been back at the halau (school), and feel even greater impetus than before to master that four-stringed source of musical fellowship. The Uke Expo made me realize that I have a lot of company.

It’s a global phenomenon. Hundreds of ukulele festivals are being held all over the world, from the US to the UK, Japan, Czech Republic, and Australia. Tapping this global affinity group, Ukulele Magazine hit the presses in the spring of 2013. Available online and in print through subscriptions and on newsstands, the quarterly publication embraces many genres of music, including Hawaiian. The fall 2014 issue provides tablature for reggae hit “Three Little Birds” by Bob Marley, a slice of Americana in The Rock Island Line, and Jason Mraz’s 2008 hit I’m Yours. Each issue has an article dealing with giants in the history of the uke, another dealing with technical aspects of the instrument and its gear, profiles of current uke luminaries and encouraging tips for beginners. Lists of clubs and festivals and a recurring chatty first-person article by various readers, “Why I Uke,” bind the world uke community together. Periodic competitions motivate readers to send sound files of their playing; this fall the prize is a Lulu tenor uke. The magazine, which comes from Bay area-based Stringletter, the publishing house that produces Acoustic Guitar, has a circulation of 8000, 2000 of them subscribers. And this is not just in the US. Senior Editor Greg Olwell told me they have subscribers in Brazil and India, among other locations that don’t naturally conjure up images of ukulele performance.

To further explore the local uke community and at the same time improve my technique, I signed up for a series of workshops with instructor Jason Arimoto, co-owner of U-Space, housed in the Japanese-American Cultural and Community Center. Just the fact that the uke classes take place in a space that is also a coffee house makes U-Space very very cool. Seriously, I recommend the horchata latte which Patrice brings to your table with a lovely smile. The ages of the ten or so students enrolled in the intermediate class ranged between 40 and 70. One of them, Neil, used to be a rock guitarist during the 1990s. He became disillusioned with the music industry and abandoned music for ten years until he discovered the ukulele. Another, Chester, retired from the hotel business, first learned ukulele years ago in his native Japan and wants to take it up again. Georgine, a fifty-ish senior management secretary, discovered U-Space when she attended the June Uke Expo on a whim. Having come across an online ad for the gathering, she purchased her first ukulele in order to participate. She wants eventually to be able to jam with her musician friends. 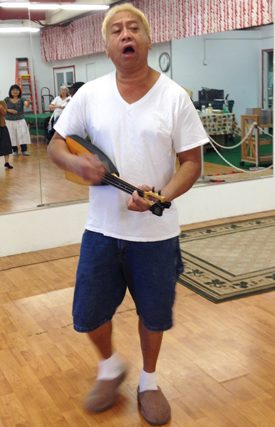 Jason calls the ukulele “the great equalizer.” He has had students of all races and ethnicities. All ages, too, although he sees the heaviest concentration among college-age and 40+ players; presumably thirty-somethings are busier building careers and raising families and have less time to take up an instrument. The six classes at U-Space brought my technique forward a few paces. I have a new palette of strums and textures I can apply to any genre of music. I’m aware of the pentatonic scale so prevalent in both Hawaiian music and jazz. During the final session, we were working with Pachelbel’s Canon, nailing the chords, playing them as arpeggios, and plucking the melody as a classical guitarist would. Now I’m working on my own arrangement of Sanoe, a waltz by Hawaii’s last queen, Liliuokalani.

However, nothing can replace learning with Uncle Lincoln. He is so encouraging and jovial. Teaching two week nights and one Friday morning (a class which I take after hula), he focuses on the gorgeous Hawaiian-language repertoire, varying these gems with the sentimental hapa haole (English language) songs about Hawaii. At the start of each Friday morning class, Tony, a retired jazz trumpeter, blows a huge conch shell three times. Enthusiastic applause from the thirty or so Friday students always follows this invented tradition. Then sometimes Uncle will lead us in a Hawaiian chant to get us charged up. Correct Hawaiian pronunciation in singing is as important to Uncle as strumming the correct chords. You’re expected to know the most basic chords. Tablature for some of the less common chords is provided on the song sheets along with lyrics in English and Hawaiian. There are always students eager to help a neophyte, whether it means showing you a chord or sharing a song sheet. Uncle keeps the atmosphere light and full of aloha with his inimitable humor and periodic shouts of “I love you!”

ULU (Uncle Lincoln’s Ukuleles) perform at festivals and periodically entertain needy populations such as hospitalized veterans. I recall that at the 25th anniversary ho’ike (showcase) of Halau O’Lilinoe held at the Japan America Theatre, Uncle Lincoln paused between ULU selections to address the audience with mock solemnity: “I know that many of you would want to join this group. Unfortunately you can’t. You have to wait for someone to die.” I hope no one took him seriously!

Like Georgine and many who take up the ukulele, I want to gain the technique and the confidence to be able to jam with friends, an experience known in Hawaiian as kani ka pila. I suspect this is true for banjo players and other down-home musicians, too. The social aspect of music-making is harder to find than it was in the last century. It used to be common for extended families to make music in the parlor or on the porch. People gathered around the piano to sing or sat in a group to play fiddles, banjos, ukuleles, mandolins… but gradually the recording industry and the concert hall were dictating that those who performed had to be virtuosos. The rest of us ordinary folk were to listen silently and applaud where appropriate.

Enough! These days more and more of us are taking back the right to make music together in a community context that is joyful and nonjudgmental. Perhaps this is the special attraction of the lightweight, easy-to-learn ukulele, which you can purchase for as little as $25 (or as much as $2500). It can be a vehicle for musical fellowship.

Come to think of it, that’s what FolkWorks is all about.

Audrey Coleman-Macheret is a writer, educator, and ethnomusicologist exploring traditional and world music developments in Southern California and beyond.

Notes From A Ukulele Lady