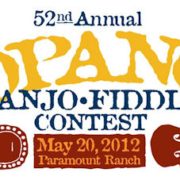 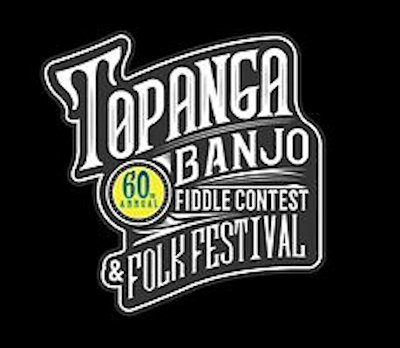 The Woolsey Fire that raged through the Santa Monica mountains in November 2018 claimed a late victim: The tall, majestic oak tree that towered for decades over the jamming scene at the Topanga Banjo Fiddle Festival, also known as the Witness Tree. After the fire, it was charred black and its branches barren, but last spring it showed signs of recovery. During the Topanga Banjo Fiddle Festival, it was sprouting some new leaves. Alas, the tree didn’t make it in the end. Not very many trees get their own memorial service, but the National Park Service held one for the Witness Tree in February 2020 before it was cut down. Its wood will be reused as the Western Town gets rebuilt.

The Witness Tree in the Jamming Corral before the fire: 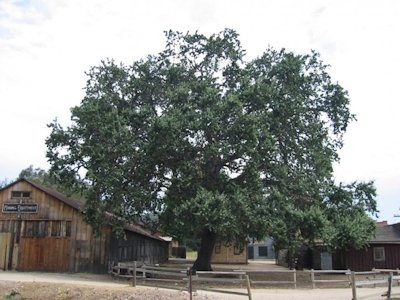 And after the fire (it is the same tree, but from a different angle that makes the trunk look different): 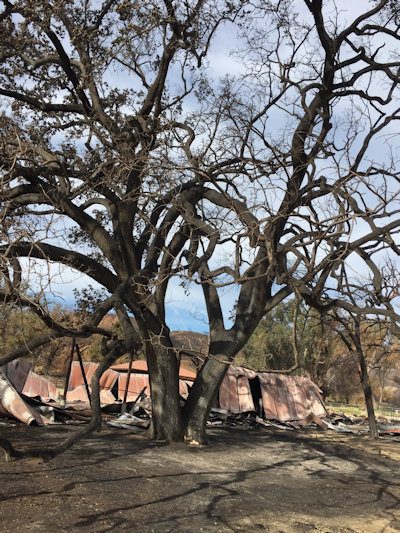 The Topanga Banjo Fiddle Contest will still be held at Paramount Ranch this year and it will be the 60th consecutive festival. This marks TBFC as one of the oldest continuously held traditional music and folk arts festival in the US. Last year’s festival was in real danger of not happening at all – first the Woolsey fire and then rain during the weekend – but then everything worked out fine. Actually, it was a great day, even though much had to be improvised. It would have been a shame if the series had been interrupted.

It will be a while before Western Town gets rebuilt and shade will be sparser after losing many trees. Actually, I’m most concerned about having lost good jamming spots. But new ideas have sprouted for TBFC as new people have joined the organization of the event. I actually had little input into this year’s scheduled program, with new energy coming into the organization, this was a good time for fresh ideas. This year’s event will see more scheduled performances with a wider range of styles.

One change will be the addition of a new stage, the Tiny Porch Stage. More than the name, this is physically the same stage used at the Tiny Porch Concerts , a summer concert series organized by Mike and Nikki Corridori. The Tiny Porch Concert series itself will start on May 10, a week before TBFC, and will be at King Gillette Ranch in Calabasas for 2020. It is a very nice setting, even though it was a forced move after the Peter Strauss Ranch was destroyed by the Woolsey Fire. The Tiny Porch Concerts are now in their fifth season to produce summer concerts with the National Park Service and it has become a great live music event for Americana in Southern California.

Another change is the Wildwood Flower Stage, which is less a new addition, but a replacement for the Pavilion Stage destroyed by the fire. However, it also has a new format, this one driven by the Wildwood Flower radio show (itself only a few months old) hosted by Scott Ferguson and Mike Bone, with Lori Nafshun doing much of the booking.

The Wildwood Flower Radio Hour features music that presents musicians, early and contemporary, who have been deeply influenced by traditional folkloric and Americana musical genres. It has live performances every Sunday from 10pm-Midnight (PST) on KXLU online or 88.9 FM. In fact, online is your best bet because it is a college radio station with little power.

Now something a bit unrelated, or maybe tenuously related. Traditional American music has a good following in Europe, an old-time or bluegrass band seems to have an easier time touring there than here. And in very unexpected places. Fog Holler, a California bluegrass band whose members have been regular TBFC contestants, toured Germany, Belgium, and the Netherlands in January and February. One of the shows was in rural East Germany halfway between Berlin and the Polish border at the Buchholz Saloon, but I could actually see the show live on the internet. A technological marvel for sure, but also a political one: Not long ago, this was deep behind the Iron Curtain, now you can hear live performances of Merle Haggard songs when the bar is open (only on weekends)