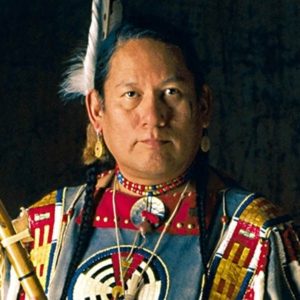 As children, many of us were taught sweet stories of the original Thanksgiving and how the “Indians” (indigenous people) welcomed the European pilgrims, and a grand feast was had by all. Today we know more about the true story, a complicated history of colonialism, war, and disease; there is an excellent article on this topic in Smithsonian Magazine.  Additionally, many cities and states have moved to recognize Indigenous People’s Day, either concurrently or in place of the federal Columbus Day holiday on the second Monday in October.

Since 1990, the month of November has been formally designated as Native American Heritage Month in the US.  And, because this is FolkWorks, I thought that it would be a good time to take a look at some of the folk music and dance traditions that have prevailed despite the documented tragedies of the past and, unfortunately, those that are ongoing. Incidentally, there is significant debate about the term “Native American” as its literal meaning could theoretically apply to individuals (like me) who were born in this country even after the Europeans arrived. Therefore, the more accurate term “indigenous,” is often preferred.  That being said, where the term “Native American” is used by indigenous individuals to describe themselves and their ancestry, I use the term that they have chosen.

Descendants of the Chumash, an indigenous people of the Southern California region, hold an annual Pow Wow to celebrate and preserve the memory of their ancestral traditions. This short video is a traditional music and dance demonstration from one of these events:

Anthony Belvado, a member of the San Carlos Apache Nation, and Alex Maldonado of the Pascua Yaqui Nation are makers of traditional musical instruments. In this video Anthony demonstrates the crafting and playing of a traditional agave fiddle while Alex plays a handcrafted flute accompanied by Nick Maldonado on drums:

Probably the best known contemporary composer/performer of Native American music is R. Carlos Nakai, of Navajo-Ute heritage.  Since the 1980s, he has released over 50 albums and received 11 Grammy nominations as well as a Governor’s Arts award. A classically trained musician, his contemporary musical focus on Native American music and culture also includes collaboration with musicians of other musical traditions.

There is a beautiful hour long performance for the Library of Congress in which Nakai performs playing various Native American flutes, while also describing the history and culture from whence they came. Not only is he a masterful player of the instrument itself, he is also a compelling speaker and teacher.  I found it to be extremely informative and highly entertaining:

There are many channels on YouTube featuring Native American music.  I cannot comment on the degree of authenticity or the particular tribe that each may represent, but much of what I have personally enjoyed as I worked on this column has been the softer and somewhat meditative melodies that encourage contemplation and provide a respite from the stressors of the day. I will therefore sign off now, and go listen to more!