I am not by nature a highly sentimental person. I do not recall the last camera I owned. I have not owned a video camera, and I don’t scrapbook. I have enough to do today to spend too much time on yesterday.

Over the years I have owned many, many guitars. Many many many. I have succumbed to Guitar Acquisition Syndrome. I have purchased two guitars in the same trip. I have purchased guitars that I kept for two weeks. I often frustrate my travelling companions by just wanting to stop and check out what’s in this music store up ahead. The internet was a very bad thing for me, as it opened up the ability to find just about any instrument that I might want to find. 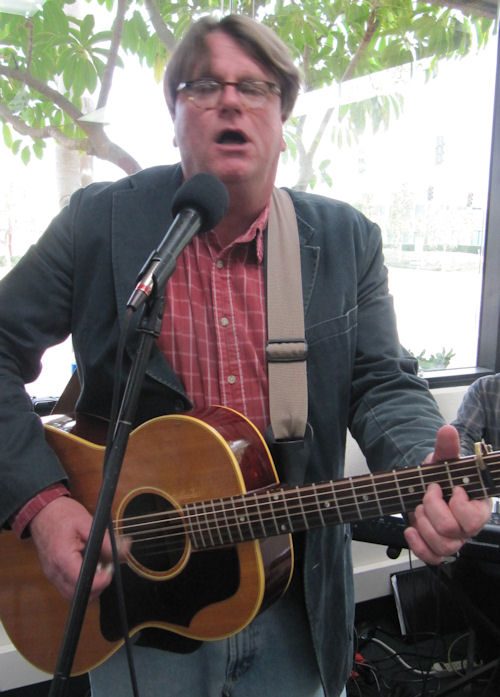 I still own a few guitars, but the vast majority sort of passed through my hands on their way to another life. I don’t recall ever having any major regrets when one moved on. But as one gets older, perhaps sentimentality becomes more common place. A few years ago, I noticed a musician playing an old Gibson that looked a lot like one I had owned, and asked what it was. A Gibson B25, just like the one I had once owned. In 1967 when I was a sophomore in high school, my dad bought a B25 because one of our neighbors had one and he liked it. I confiscated it almost immediately. I had owned about a half dozen guitars at this point, most only marginally playable and none manufactured anywhere near the United States. The B25 was a “student” model with a small body without any ornate inlays or elaborate pickguard. But it had that sound: like a record. I could hit an E chord and sound like Tom Rush, at least to my teenage ears. It stayed in tune. It was wonderful. But at some point a year or so later, I became enamored of a Martin 12 string and the B25 was traded in. The Martin was somewhat of a disappointment. I should’ve realized that when one has trouble keeping a 6 string in tune, changing to a 12 string is not logical. I think I had it in tune once…

An electric replaced the Martin, and so on and so on. Fast forward almost 40 years, and family and funds have slowed my guitar disease considerably, but not killed it. I’m slipping around on the web and note a 1964 Gibson B25 at a music store in Montana. I called the owner and chatted. He pulled out the Gibson and played it for me on the phone. It sounded good. I told him I wanted to buy it but he continued to try to sell it to me for a couple more minutes before I told him again that I wanted it. I mentioned that I had played for a couple of years at a bluegrass festival an hour south of his shop. He said he always set up a booth for his store at this festival. He asked the name of the band, and what instrument I played. He said he remembered giving me directions to go hiking following the festival. Then he “bluegrass gossiped” about a bass player in my home town… I did not recall the gentleman, but when I told my wife the first part of the story, she said “You mean the guy from the music store booth who gave us directions to go hiking?”

The B25 needed a little work, and I got a pickup installed. For awhile, it became my main stage guitar. Then I saw a picture of a performance and thought “Boy, that guitar sure looks little on me.” Not that I’m vain, but it ended up in the case for almost a year. I pulled it out to string it up and put it on the market, and I fell in love all over again. I have sublimated my vanity. It’s an easy to play acoustic guitar. The small body is remarkably comfortable. It records beautifully, without any of the boom often associated with dreadnaughts and larger guitars.

Could I have saved a lot of money and time if I would’ve just kept that first B25 in the late 1960s? Sure, but I would’ve missed a nice long strange trip through the world of musical instruments…

Shut off YouTube for a day and go out and see some live music. If the venue serves food and drink, have some. If you find the performer likable, buy their CD or find out where you can download their music.