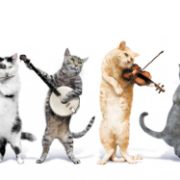 Musings on Felines and Folk 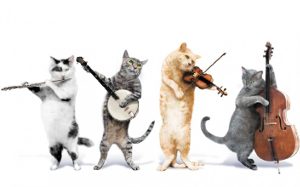 I love all animals, though I have always had a special affinity for cats. Not only do I own serve at the demand and pleasure of two of them, I admit that I am easily caught up in the multiple “cute cat” memes and videos that seem to find their way into my Facebook feed.

Smithsonianmag.com cites a 2007 study which, based upon genetic analyses, found that domestic cats are actually descended from a Middle Eastern wildcat, Felis sylvestris, the meaning of which is “cat of the woods.” The authors of that study speculate that the process of “domestication” may have begun as many as 12,000 years ago, though one study author refers to cats having “domesticated themselves.” Of course, in my opinion, cats are not, and probably never will be, entirely domesticated, which I personally find to be part of their charm. In later centuries, cats were revered by the Egyptians; cat cemeteries and mummies were discovered by archaeologists and even an Egyptian goddess of love called Bastet had the head of a cat.

The cat has often been represented in the art world; one artist, Pierre Auguste Renoir, has a number of particularly well known paintings that include the cat in a warm interaction with a human. One of the best known of these is “Young Girl with Cat” painted in 1879. You can find this picture, and several others, here. Pablo Picasso, also a cat lover, included them in many of his paintings as well, often with symbolic meaning.

Cats have also been the subject of poetry: from the 9th century Irish monk who wrote about his cat Pangur Bán to T.S. Eliot’s “Old Possum’s Book of Practical Cats”—later made into the popular musical “Cats” by Andrew Lloyd Webber, which ran for 18 years on Broadway and continues to tour.

But, although this is Intermission, and this is also Folkworks. What does the folk music world have to offer on the subject of Felis sylvestris’ descendants? I’m sure that many of us heard (or sang) the somewhat macabre children’s song The Cat Came Back, perhaps at a summer camp or other gathering around the campfire. Note: if this one gives you an earworm, I take no responsibility if you decide to click the link.

Then there is the Rooftop Singers’ Tom Cat which was on their hit album Walk Right In and may or may not be literally about a cat—you can decide for yourself.

Also from the sixties is Norma Cecilia Tanega’s Walkin’ my Cat Named Dog. Although this was her only “hit” record, she penned a number of songs for Dusty Springfield, who was also her domestic partner in the late sixties and early seventies. Following their breakup, she moved to Claremont, California where she continued to write songs and collaborate with other musicians.

A more contemporary favorite of mine is Jamie Anderson’s When Cats Take Over the World. This would certainly . . . well, change quite a few things. Give it a listen.

I think that Albert Schweitzer summed it up best: “There are two means of refuge from the miseries of life: music and cats.” At least for me, that says it all.

MUSINGS ON FELINES AND FOLK