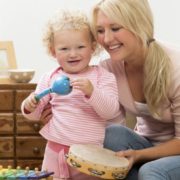 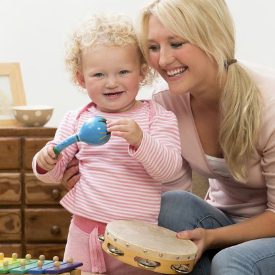 The music we love gives us entertainment and community with others with whom we can share it. But can it do more? There are many studies from universities around the world that seem to give a resounding “yes” to this question. And, some are in our own backyard!

USC’s “Brain and Creativity Institute” researchers have been studying the effects of music training on child development since 2012. The study follows children engaged in group music training and, though it has not yet concluded, has found “a positive association between music training and improvements in cognitive skills including working memory and inhibitory function and as evidence by greater brain activation in brain’s prefrontal circuitry during tasks engaging executive function skills.”

Researchers at UCLA’s Tennenbaum Center for the Biology of Creativity are focusing upon how music can help children with Autism Spectrum Disorder who have difficulty with social and emotional communication. Researcher Dr. Istvan Molnar-Szakacs also believes that “Music is a birthright of all children. To be able to listen and appreciate, sing or participate in music-making are as essential to development as mathematical or linguistic learning.”

A study from across the ocean demonstrates that the value of music in childhood starts early. At the University of Queensland in Australia, researchers found that introducing participatory musical activities in the home for two- and three-year-old children resulted in increased cognitive and social skills, as well as the ability to regulate attention and emotion, by the age of five. Interestingly, the study found music participation to provide enhanced benefits over shared reading activities, which have also been shown to have value. So, sing along with those kids and grandkids in your life and encourage playing of simple, age-appropriate musical instruments. You can have fun with this as well!

So, what about adults? And, particularly, adults who have lost touch with the world around them due to diseases such as Alzheimer’s? You may have seen the viral YouTube video of “Henry” which became part of the longer, award winning documentary “Alive Inside”. If you haven’t seen it, it’s posted below (you may want to grab a tissue). From this, “Music and Memory” became a national non-profit organization supplying iPods and music to people with advanced dementia. The impact of music on people whose lives have been limited by this terrible disease can be truly amazing.

Here is California we have our very own such program, under the auspices of the California Association of Health Facilities: the CAHF Music and Memory Project. The program will bring music to 4500 skilled nursing facility (nursing home) residents in 300 facilities over a three-year period and the training and equipment is free for participating nursing homes whether or not they are members of CAHF. The project is also part of an ongoing study, by researchers at the University of California, Davis Betty Irene Moore School of Nursing that focuses upon using music to reduce the use of antipsychotic medications.

If you have someone in your life who has Alzheimer’s or another type of dementia, all it takes to give this a try is an iPod or other music player loaded with the music that would likely be meaningful to that person and a set of headphones. Carefully check the volume on the headphones before putting them on and see what happens. Of course, there are no guarantees but this has been shown to be beneficial for so many so why not give it a try?

From the earliest years of childhood to the later stages of aging, music enriches and enhances our lives. It is not surprising that scientific studies agree with what we already know as individuals but the wonderful thing is that the academic community’s work in this area provides further awareness and support. May it grow and continue.