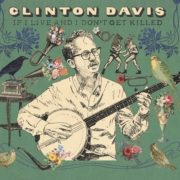 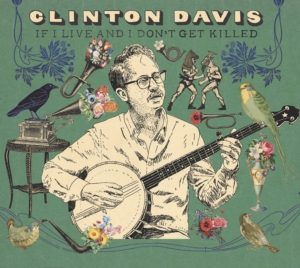 Years ago I heard about a Kentucky-born/raised musical prodigy named Clinton Ross Davis. Clinton was living in SoCal and still does. San Diego to be exact. He had a band, the G Burns Jugband, that really piqued my interest. Within a few more years, he was full of so many musical surprises I couldn’t contain myself. I filmed him at the Tiki Parlour. I asked him to judge at the Santa Barbara Old-Time Fiddlers’ Contest. Who was this guy nailing a pre-war old-time sound without any of the silly progressive affectations that have plagued so many traditional music genres? If you know anything about me or Tiki Parlour Recordings, then you know that I love the old sounds. It’s my great big quirk! There are countless expressions of these old sounds if you dig just a little. Most of them are incredibly enchanting and very difficult to reproduce without obsession and a real love of musical tradition.

Nowadays there’s this idea that traditional music needs to change and “evolve” with the times. Bunkum! Hogwash! This type of thinking often leads to forced, tired and contrived approaches to traditional musical repertoire that usually leave me disappointed and sore in the eyes from the constant ocular rolls. The irony is that most progressive artists in various “trad” fields aren’t as original as they fancy themselves to be. In fact, most of them sound very similar to each other. I guess they’re all being “original” together in near perfect unison.

The beautiful thing about the American old-time genre(s) is the massive amount of repertoire and the endless stream of mesmerizing old-time musical styles on record before the late 1930s. And let’s not forget the field recordings. Many of us old-time music lovers and musicians can spend a lifetime absorbing the music of just a handful of the early practitioners. Playing this music comes with a price however: devotion, time and sweat. Especially if it’s being passed down to you from another human in the tradition. However, it is very fun too!!

As I always tell my UCLA and private students, you needn’t worry about being original. You already are.No matter how hard you attempt to play like the old dead ones, you will always sound like yourself too. So no need to reinvent the wheel by adding three more strings to your fiddle and playing Reggae rhythms in Bonaparte’s Retreat. Be part of the tradition, revel in the old sounds and try to mimic these old magical techniques before they’re mostly forgotten. As you do this, you will still sound like yourself. I promise. Additionally, you might also have the rock and drive of Tommy Jarrell, the lilt of Kirk Sutphin, the virtuosity of Blanche Coldiron, the archaic beauty of Manco Sneed, the NC duo magic of Joe & Odell Thompson, the bagpipey ornamentation of John Salyer, the vocal power of Alice Gerrard, the funkiness of Dan Gellert and Jim Bowles, the dreaminess of Edden Hammons, the fire of Howard Armstrong and so on…

Many of the musicians I’ve recorded are exactly that. Think Brad Leftwich, Jamie Fox, Paul Brown, Bruce Molsky, Foghorn Stringband, Dom Flemons, Spencer & Rains, Steam Machine, Suzy & Eric Thompson, Trevor & Travis Stuart, Downhill Strugglers, Art Rosenbaum, Henry Barnes, Aaron Jonah Lewis, Rafe Stefanini, Scott Prouty, Tom Sauber, and the list goes on. They have studied the old recordings, and many of them have studied with aged musicians passing the folk torch down. None of them sound like tired, monotonous, or humdrum carbon copies. They sound unique, rich, powerful and grounded in the ways of old. They are the real musical secret of the universe. In fact, we old-time musicians are all part of this musical secret! That means you too.

Clinton Davis “If I Live and I Don’t Get Killed” CD TRAILER
In today’s music business, the horrible slur “museum music” is often thrown around. I guess it’s to distinguish the hot, new, visionary traditional musicians from the weird musical custodians playing from their cobweb-covered jam spaces in some forgotten “museum” basement. It’s a myth of course. Just visit YouTube or an old-time festival. The tradition is thriving. The music illuminati need something new and different to promote in the next marketing cycle. Sothey double down on the concept of freshness and originality to promote their new product as if it were the latest toilet bowl cleanser or genetically modified prune. Luckily, as a record label owner who has no interest in personal profit or fame, I can devote all of my resources to helping old-time musicians get their old school music into the world. Never is a decision made in self interest. Only the interest of improving the visibility of these great music makers whether professional or amateur AND helping to preserve these old sounds with the added elements of rich liner notes and folk art. It’s turned into an obsession for me and my partner Richard Hocutt. We are the “anti-record label” record label.

This brings me back to Clinton Ross Davis. The guy is a serious genius and a tireless student of the old sounds. In a relatively short amount of time he has mastered mandolin, various banjo styles, finger-picked guitar, blues piano, old-time fiddle, singing, harmonica and arranging. He doesn’t live in a museum either. And he probably doesn’t sleep. I jumped at the chance to release his pandemic-era recording “If I Live and I Don’t Get Killed.” We worked on this release for a good year. It’ll probably blow your mind. There is more history and sound in his fingers than you could imagine possible. You can even find it HERE.

SPOILER ALERT: He sounds just like Clinton Davis too.