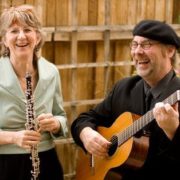 "They had a great four years that were fun," says Acoustic Voices series producer Ron Maurer. "Then the fifth year it wasn’t fun anymore for (Jim) and he didn’t want music to ever not be fun. So he said, ‘That’s it.’ Geoff and Maria went out and performed together. Geoff went into writing music for movies and 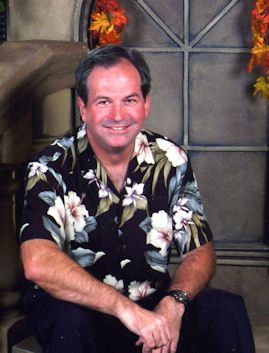 also became a world-renowned scholar on Bix Beiderbeck. Geoff has a Martins guitar model named after him."

Kweskin stayed in the Boston area, working as a contractor and doing occasional gigs on the side. He recently relocated to the West Coast."I’ve always admired Jim Kweskin and the Jug Band," says 53-year old Maurer, a guitarist himself who grew up on folk revival music that his older siblings brought home from college. "I went to see him at a local performance and he’s still got the magic that makes people sit back and enjoy themselves."

Maurer was looking for that magic as he planned Acoustic Voices. Now in his eighth year on staff at the Shannon Center, he did not depend on artists’ past reputations and made sure to attend current performances of anyone he was considering for the series. "Voices change. I hear a lot of people and their voice isn’t there any more. I’ve heard Gordon Lightfoot but he doesn’t have the voice anymore. So we won’t be having him." 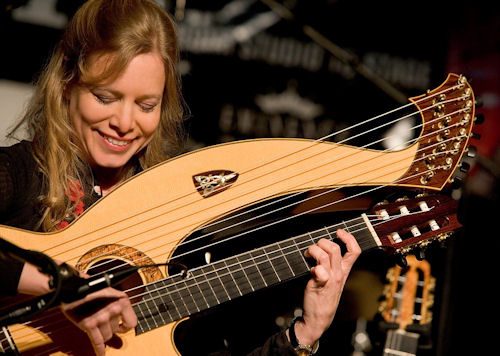 In January, the series will feature Muriel Anderson, virtuoso on both guitar and harp guitar, and the first (and still only) woman to win the National Fingerpicking Guitar Championship. Well-versed in folk, classical, jazz, pop, and bluegrass genres,she has studied with classical virtuoso Christopher Parkening and with Nashville legend Chet Atkins. She will bring along with her the neo-flamenco guitarists Leo Henrichs and Raughi Ebert, known as Tierra Negra, who have shared stages with Bob Brozman and DJ RAM,among others.

The setting for these concerts is unique in Southern California. If you haven’t attended a concert inside the Shannon’s intimate,ornate 403-seat Robinson Theatre with its angled mezzanine, curved balcony and flawless sight lines, you’ve deprived yourself of a chance to 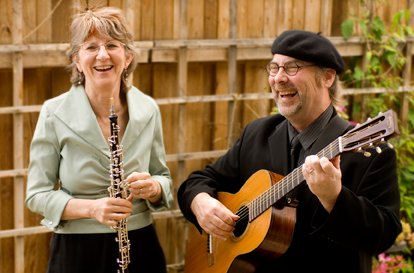 savor music performances as they are meant to be heard. That combination of elegance and intimacy seems to inspire performers to reach out to the audience. For Acoustic Voices, Maurer is going to intensify the effect by building a ramp from the stage into the orchestra section. "One of the things that make the Shannon Center (so special) is the way the artist interacts with the audience. That’s why we’re extending the stage out — so the performer will be closer to the audience. This is something we did very successfully with our cabaret series. It will require less amplification so we’ll get a more natural sound. We’re trying to bring some of the feel of the Coffee Gallery to Shannon Center. But it will still be a concert atmosphere. Shannon Center is a theater where the audience can bring its undivided attention to the performer. Here we have a wonderful acoustic space with good equipment. I’m doing the sound. I’ve actually been running sound boards for about 20 years."

The April show will pair Alaska’s "fiddling poet," Ken Waldman with Southern California multi-instrumentalist Tom Sauber. Waldman combines Appalachian-style string band music with his original poetry, something he has done for years in educational outreach programs around the country, including the one run by the Shannon Center. Sauber plays traditional music on banjo, fiddle, guitar and mandolin and has shared stage and studio with such greats as Ry Cooder. Waldman and Sauber met and "clicked" when Waldman recruited backup musicians for one of his outreach performances. Their combined talents should appeal to those who lean toward traditional folk music.

As with the other shows the Center features, the performers get the royal Shannon treatment. "Part of why artists like to come here is how well they are treated," says Maurer. "Performers tell us it’s so nice to be treated with respect. That’s how we treat every artist of every genre. The Hawaiians are all so nice to work with and friendly. We’ve had some artists who arrive with attitudes but they never seem to leave with attitudes."

Acoustic Voices is likely to become a staple of the Shannon Center’s season, alongside the cabaret evenings, classical concerts, and longstanding Aloha Series that brings the cream of musical talent from Hawai’i. A tryout with two concerts last year brought in about half the number of seats they thought they should fill, but the audience was so appreciative that theater manager David Palmer gave Maurer the green light to program four performances this season. Palmer also put in a deciding vote to include Eric Tingstad and Nancy Rumbel in the 2009-2010 line-up for the December concert. The guitarist and English hornist earned a Grammy in 2003 for their album titled Acoustic Garden.

If the response to Acoustic Voices is enthusiastic, Ron Maurer hopes to expand the series to five concerts next season. That will probably be the maximum number that the busy Shannon Center can support. But even four can make an impact, says Maurer. "My goal is to expand the notion of acoustic music and to feature music that you can’t hear on the radio. None of it is too far from folk music. If you come to the series to relax your mind, you’ll enjoy all of it."

To find out more about the artists, performance dates, and ticket prices, go to www.ShannonCenter.org or call the box office at 562-907-4203. The Shannon Center is located at 6760 Painter Avenue in historic uptown Whittier.

Audrey Coleman is a writer, educator, and passionate explorer of world music and culture.