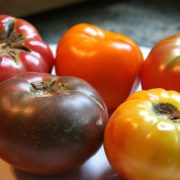 After all my griping and complaining about the lack of tomatoes last year, I now am a bit chagrined to find myself with a huge tomato glut. If I have to have something to complain about, I’m much more comfortable complaining about too many tomatoes and not too little. It’s time to eat oneself silly with tomatoes and enjoy every bite until they are gone and then learn to do without until the next fresh tomatoes next year.

I’ve been accused of not liking tomatoes because I pull them off my sandwiches and pick around them in salad. I cannot abide store bought tomatoes – even the ones from the farmers’ markets are suspect in my book. I want them fresh from the garden – still warm from the sun is best. I have a slight allergy to tomatoes – I pay a price for eating them and so I’m selective about the ones I’ll suffer for. I am of the opinion that cherry tomatoes have no business in the dining room; their number one purpose is to feed gardeners as they work and to that end, I try to have a couple of plants scattered about the garden in strategic places – usually near some shade. I’ll grab a handful of these sweeties and head over to the shade to enjoy.

However, there are some cherry tomatoes I’ve been introduced to that are so good I tend to overeat them, even knowing I’ll suffer for it. White Beauty is, of course, white and when ripe, it pops with the juiciness of a ripe peach and the sweetness of a candy bar. The orange Sungold is the same way – sweet in the same way as candy without any of the attendant calories and cavities. I know a lot of folks are all high on the Yellow Pear and Red Pair, but compared to these, the pear tomatoes don’t hold a candle. I don’t think they are all that sweet and I don’t like the mealiness.

By mid-June, with a whole bunch of cherry tomatoes beginning to ripen. But as the tomatoes began to turn colors, over in the untended student gardens, it was a big splash of yellow calling my attention to find some tomatoes in the weeds. 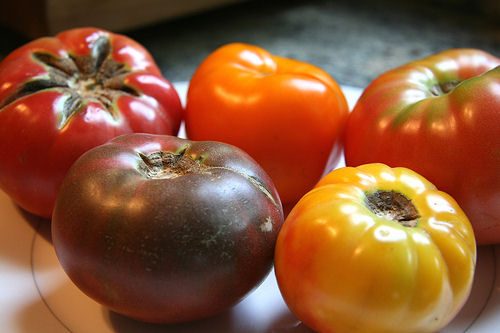 I had caught a glimpse of some ripening heirloom beefsteak tomatoes just beginning to change color. This confounded me to no end. I had been taught, with my personal experience concurring, it is nigh to impossible to grow beefsteak tomatoes as close to the ocean as The Learning Garden is. Given my experience, I would not have planted any large tomatoes, but the high school students, blissfully unaware that you won’t get tomatoes from the plants they had been given, planted them anyway. Which leaves me looking at about four dozen tomatoes that, according to all I know, should not be there.

These were not coddled plants! Once the high school students have been let out for summer, their gardens aren’t really cared for. But there among the weeds, I found all these great big tomatoes – some of them yellow and some are pink. Only a couple are red. They are all big. And have the wrinkled top that characterizes heirloom tomatoes and never on modern tomatoes that are bred to look smooth and antiseptic on the grocers’ shelf. Too bad they didn’t spend more time breeding taste and less on looks. It’s not like we take tomatoes on dates!

So here are all these ugly tomatoes growing in the weeds and I’m so excited I am just about undone. When they come in, I’m expecting to spend a few days just eating tomatoes. That’s why Guy Clark’s song declares money “can’t buy true love or homegrown tomatoes…”

Grandson of a Great Plains farmer, David King is the Garden Master at the Learning Garden, on the campus of Venice High School.  He shares his love of the land and music through teaching, writing and playing in a folk/country band. Contact: greenteach@roadrunner.comD