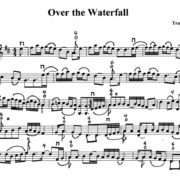 Over the Waterfall from the playing of Alan Jabbour

Over the Waterfall is an extremely popular fiddle tune, even to the extent that it occasionally gets (unfairly) snubbed as a beginner’s tune. But not that long ago, Over the Waterfall was at risk of extinction: By the middle of last century, only one musician was known to play this tune, Henry Reed (1884-1968) of Glen Lyn, VA. Reed taught the tune (among many other tunes) to Alan Jabbour, whose band, the Hollow Rock String Band, was at the center of the old-time stringband revival in the 1960s. Alan remembers that his band loved the way the tune plummets down, as if going down a waterfall, and they added some intriguing chords to it. The version they recorded on their 1968 album is the tune as it is known today and Alan has a number of stories associated with it.

The first story dates back to the 1969 Topanga Banjo and Fiddle Contest. Then, Alan had just moved out to Los Angeles to become an assistant professor at UCLA and was drafted to judge the fiddle contest. Sitting in the judging area, he remembers a young man coming up on stage “dressed in the Topanga garb of that period” to announce that for the contest he would play “a Henry Reed tune, learned from the playing of Alan Jabbour: Over the Waterfall.” The contestant obviously didn’t know that his source was sitting right in front of him (which might have made the performance a bit more nerve-wracking), but Alan was just as surprised that Over the Waterfall would beat him to Los Angeles.

Alan Jabbour learned much of his repertoire in the 1960s from (then) elderly fiddlers in North Carolina, Virginia, and West Virginia and his fiddling style reflects the intricate and often syncopated bowing patterns of Henry Reed and other Appalachian mentors. Over the Waterfall soon was adapted as an instructional tune for other instruments. As a consequence, many people have only gotten to know the extremely simplified versions in beginner books. I thought it would be a good idea to get a better documentation of the real tune and asked Alan to transcribe a version for this column. So this column contains a special treat: Alan’s own transcription of his playing. Although there are books of transcriptions of Alan’s playing from at least two of his CDs, you will not find his version of Over the Waterfall anywhere else. 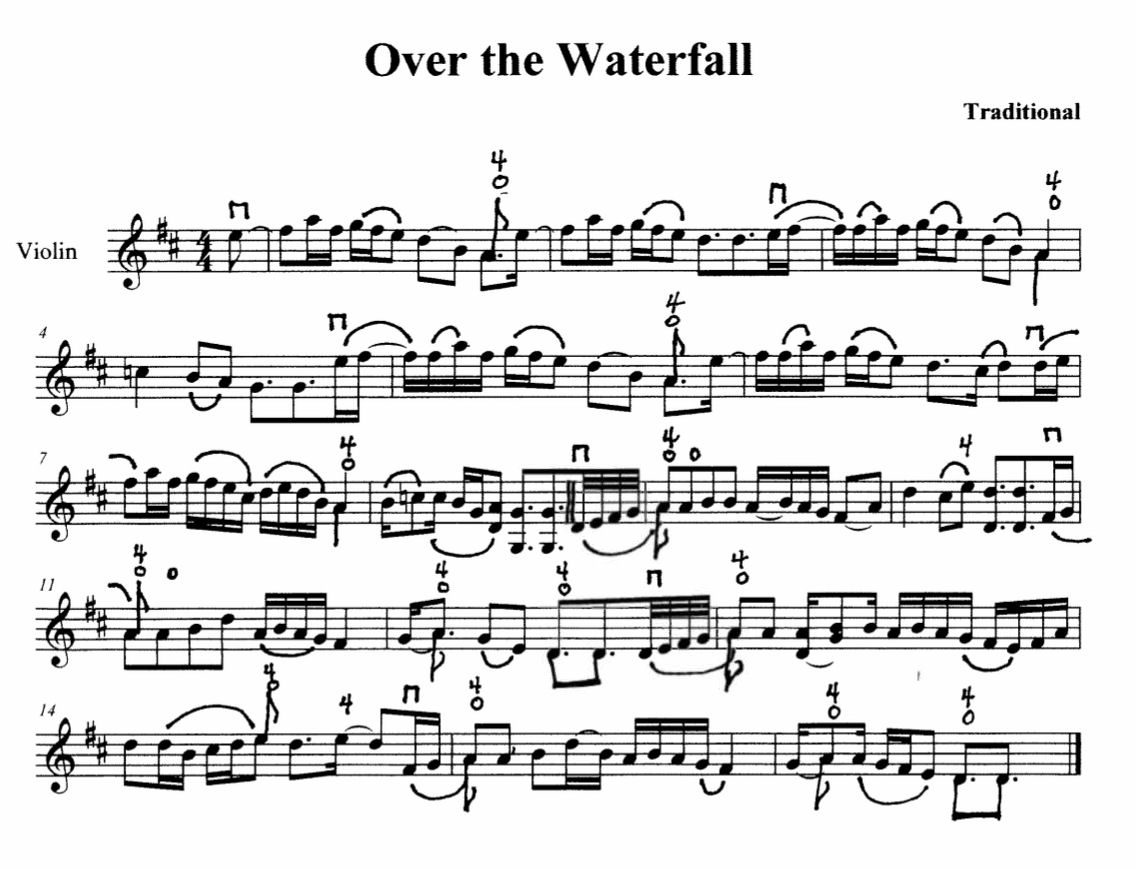 Alan sees some similarities between this tune and a venerable British ballad sometimes called Eggs and Marrowbones, in which a woman tries to blind her husband and push him in the river but is tripped and falls in herself. The ballad, which exists in American, English, and Irish versions, may be a relative or even an ancestor, but Henry Reed is the only source for the fiddle tune. Over the Waterfall is now a famous instrumental tune, but it passed through a precarious period where it almost disappeared.

Alan did not stay in Los Angeles very long after the festival and in fact moved to Washington, DC, the same year to head the Archive of Folk Song (now the Archive of Folk Culture) at the Library of Congress. He has never been at another Topanga Banjo Fiddle Festival after 1969– until 2012. This year, he will be returning to the festival after an absence of 43 years. After the brief stint at UCLA, his professional career kept him in Washington. In 1976, he became the founding director of the American Folklife Center in the Library of Congress, a position he held until 1999.

Here is another Over the Waterfall story. In 1981, Alan and his wife were invited to Hungary for a set of folklorist conferences. Attending a late-night local party where the schnapps was flowing and fiddlers from Hungary and Brittany were jamming, word got out that the American also was a fiddler player and Alan was invited to join. In Alan’s own words:

“I agreed, and she turned and communicated with her band in a language I could not understand. But I could tell from the context that they were probably debating what tune in their repertory an American might know. Finally she turned again to me and said brightly in English, “Do you know Over the Waterfall”?

Alan Jabbour and Ken Perlman are headliners of this year’s Topanga Banjo Fiddle Contest and Folk Festival on May 20. Both Alan and Ken will also do solo workshops.