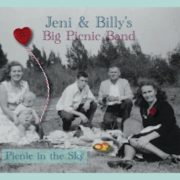 Title: Picnic in the Sky 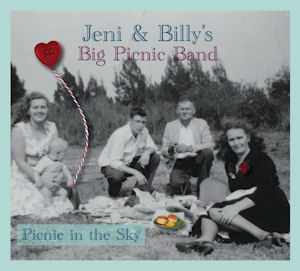 I last wrote about the Nashville duo Jeni & Billy in the fall of 2008 when I reviewed their release of that year, Jewell Ridge Coal.

Since that time, Jeni Hankins and Billy Kemp have been busy traveling throughout the US, United Kingdom and Canada, as well as recording. Their follow up to Jewel Ridge Coal was a fine studio album, Longing for Heaven in 2010, and then in 2013 they released Sweet Song Coming ‘Round which was a live-performance album collated from their 2012 US tours.

This new release, Picnic in the Sky, is quite the departure for the duo but also a revival of sorts, one of a different set of roots: big country classics that are realized in most dramatic form with a full band accompaniment and arrangements. The songs still come from the place that country music (and their previous writing) has always come from: real life stories of country people, elevating their experience into dramatic art works, reflecting love found and lost, tragedies within communities and families, the punishing and demanding lives of the coal miners, and the everlasting strength born from faith and family constancy. But what is different here is the full-on band production. Instead of the spare voices and single or duo instrumentation of previous albums, you have a concert feeling on a big stage.

Listening to this album I couldn’t help thinking that in another time and space now long ago, Jeni & Billy would have been the core of country music. And it is brought to mind because of the “big” in the Big Picnic Band: that country sound we all knew and loved from generations past is there, with an old-time feel and origin. Picnic in the Sky delivers a beautiful one-two punch of vintage Jeni & Billy original Appalachian sounds and spare singing with a full-blown country ensemble that makes you think of them anew. As you listen you’ll be able to imagine them on the stage at the Grand Ole Opry of a Saturday night, with a group of players illuminating their songs with high style and glamour. However, the authenticity of their place in the country music culture, reflecting the coal mining life and a strong Christian faith, is never lost. I can just see in my mind’s eye the full audience at the Ryman Auditorium listening to Jeni & Billy and nodding their heads in recognition, approval and delight as they listen.

I pulled up the milkweed, hid ‘neath the willow tree

from the church bell and the mystery

‘cause I did not understand

Christ Jesus’ victory and how that he loved me —

the tears and the tongues, the power in the blood…

Jeni and Billy weave new poetry out of vintage words and catch phrases inherent in the culture of Appalachia, whether it’s about the mines, the kitchen, the sewing table, the country itself or finding or losing love, you will hear echoes of the old mixed in with their new writing. This balancing act seems as natural to them as breathing, and the songs are therefore truly new. There are echoes of vintage Dolly Parton-like songs (which came from Appalachian-derived folk tales) of sweet simplicity like The Robin and the Banjo where an old abandoned banjo hanging in a forgotten cottage makes friends with a bird who saves it. There’s a rousing song about flatfoot dancing (Good) and two great old-fashioned country love ballads in Are You Meant for Me and The Mystery of You and Me. These lyrics bring to mind classic Louvin Brothers:

How can we say we’re meant to be

and then doubt that we should be in it?

How can we say we’ve waited so long

and then end it before we begin it?

So many nights we’ve lain awake

hoping it was only the weather,

wondering if our troubled hearts

thought we should have known better

If we could find the compass and map

to show us the heavenly key,

we could unlock the mystery of love —

the mystery of you and me…

the mystery of you and me.

There are also interesting and unique dark tales, from Reckoning Day, The Old Hotel and The Days of the Blue Tattoo.  The first one is a song about realizing that you can take wrong turns and knowing in your heart that there will be a reckoning day. The second is a bitter lamentation about having been left:

I’ve got a gun and a fifty dollar bill…

and the last is an evocative and moving re-telling of the story of Olive Oatman who was captured by the Yavapai during the Gold Rush days and became part of a Mohave tribe. She was rescued by soldiers and taken back to “civilized” life, though she is left displaced and confused, while she still bears on her skin the mark of the tribe in her blue tattoo.

The new poetry is on display in a fine song called The Mill Hurries On, invoking the lives of cotton mill workers:

Oh, the cotton flew around us like an alien snow.

Having no way to melt, in our lungs it did go,

and there made its home, like an unwelcome guest,

’til it grew and it grew so we could not take breath.

Way down in my dreams lived a devil well dressed.

He counted his money with his foot on my chest.

I knew that my fever told a story well known.

I am no longer and the mill hurries on.

Breaking the sad moods is one I so enjoyed: the barn-burner, flat-foot dancing special in Good. Complete with stomping and hand-claps from the full band, you want to replay it and dance around your house and imagine a big party there with you. And the spiritual side of things is never lost and makes a special appearance in the song Made as New reflecting the belief that “I will be made as new, I will leave this world I knew, I will go to a far off land to be made new by God’s hand.”

The presence of the Big Picnic Band is the big departure for Jeni & Billy as I mentioned, and as it happened, a happy and un-planned surprise. Through serendipitous meetings with Dave Way and Dillon O’Brien while in Los Angeles, a full-band album was planned and then recorded in Los Angeles during two sessions in 2013. Producing the album with Jeni & Billy and recording at the Waystation in Los Angeles were producers Dave Way and Dillon O’Brian, Dillon joining the band on piano, organ and vocals. The rest of the band is Billy Kemp on guitars, banjo, harmonica and piano, Craig Eastman on fiddles, slide guitar, lap steel and mandolin, David Jackson on bass and accordion, Denny Weston, Jr. on drums and percussion, and David Keenan on National guitar. Again, a band that would be right at home on any country, bluegrass, Americana or old time stage in the world.

Bringing Jeni & Billy’s songwriting to a great, new and broadened production, with their writing reflecting a diverse perspective, rooted in solid tradition, this record is a delight and a revelation for all J&B fans. Please visit their website and learn more about this great Nashville duo, now planning a tour through California for Autumn of 2014.

Award-winning recording artist and critically-acclaimed Americana powerhouse vocalist, Susie Glaze has been called by BLUEGRASS UNLIMITED “an important voice on the California Bluegrass scene.” Her album “Blue Eyed Darlin'” was the winner of the Just Plain Folks 2006 Music Award for Best Roots Album and FolkWorks Magazine’s Pick for Best Bluegrass Album of 2005. “One of the most beautiful voices in bluegrass and folk music today.” (Roz Larman of FolkScene). Susie’s latest release “White Swan” was released in March of 2013 to critical acclaim from No Depression, FolkWorks, Pop Matters, M Magazine for Musicians, Music News Nashville and FolkWords UK among others. Visit www.susieglaze.com.

Jeni & BIlly – Picnic in the Sky