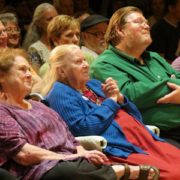 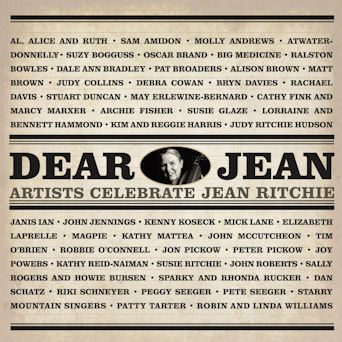 “As the ‘Mother of Folk,’ Jean is a living museum of impeccably rendered songs passed down from singer to singer, influencing and inspiring generations.” —Joan Baez

“When I grow up I want to write just like Jean Ritchie. Seriously, I love every song she’s ever written. I love her simple yet beautiful melodies and the honest, heartfelt truth in them.” —Dolly Parton

Dear Jean ~ Artists Celebrate Jean Ritchie was released in early September, and I’m making its release the subject of this months’ column, offering up a kind of announcement and discussion of the album, not necessarily a review. Being one of the artists on the album, I won’t review it in the formal sense, but I do want to announce it to my FolkWorks readers, as I truly believe it is a seminal work of art, an important collection as tribute to the great American folk music icon, Jean Ritchie.

Fiona Ritchie, the host of NPR’s “Thistle & Shamrock,” in her liner notes to the album, states: “Jean Ritchie represents a living connection to a heritage of song, spanning an ocean and several generations.” And for Fiona Ritchie (a shared name but not related, though Jean likes to call her “cousin”), this is one of the keys to the value of this tribute record. Jean Ritchie is and has always been, throughout her life and extraordinary career, a living tradition bearer, keeping alive and moving forward generations-worth of music through collecting and scholarship, as well as adding her own profound original songwriting.

What is most exciting to me is what this record demonstrates: this music will live on through the talents of contemporary artists who are re-interpreting the songs in their own ways, and proving that these marvelous art works truly transcend time and will live on as long as there is even one voice to sing them.

And far from one voice ~ so many fine artists have contributed to this album that it’s a moving tribute to Jean’s body of work as well as to Jean herself. An impressive list of accomplished, known and unknown singers and musicians, both inside and outside of Nashville, part of the folk, bluegrass and old time scenes, along with mainstream country artists, have all contributed their talents with love and respect for what Jean has created, her living legacy to the world of music. The producing team of Mick Lane, Dan Schatz and Charlie Pilzer, devoted colleagues of Jean’s for so many years, deserve very special accolades for taking this 2 CD set production to its brilliant conclusion.

Here are the artists involved: 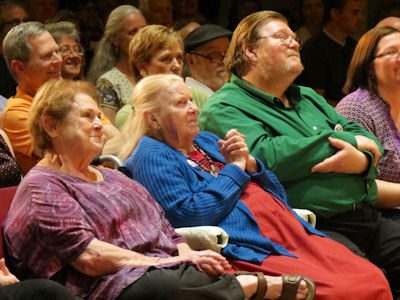 Jean Ritchie and her family.

To know more about her, here is some background: Jean Ritchie was born in 1922 in Viper, Kentucky, the youngest of 14 children. Ritchie grew up immersed in the traditional songs of the region and moved to New York in the 1940s where, as a social worker, she taught music to children. She also befriended Pete Seeger, Oscar Brand, Woody Guthrie and Alan Lomax during this time and, in the 1950s, recorded several albums for Elektra. In the early ’50s she received a Fulbright scholarship and traveled to the UK and Ireland to collect traditional songs. Ritchie’s songs have been recorded by a variety of artists including Linda Ronstadt, Emmylou Harris, Johnny Cash and Judy Collins. Over the course of her career, her song collecting and song writing has helped to preserve the musical legacy of her Kentucky home, as well as expand awareness of its challenges through her continued support of the grassroots environmental organization Appalachian Voices and politically pointed songs such as The L&N and Black Waters. Not only is Jean Ritchie an amazing musician, cultural preserver, and activist, she is and has always been a welcoming, supporting mentor for all those who have crossed her path, and Dear Jean gives a well-deserved thank you for years of inspiration.

Jean’s original songwriting does about equal duty on this record with the traditional songs that she collected and developed within her family over a lifetime of scholarship and field recording. The album begins with her iconic protest song about the tragedy of mountaintop removal in Eastern Kentucky, the brilliant Black Waters, sung by John McCutcheon, with Tim O’Brien, Suzy Bogguss and Kathy Mattea. Robin and Linda Williams also add a famous coal mining anthem in The L&N Don’t Stop Here Anymore. Janis Ian does a beautiful piano treatment on Morning Come, Maria’s Gone, and Judy Collins’ work on One I Love is a true standard bearer for contemporary recordings of Jean’s original songs. Standouts in the traditional category are Peggy Seeger on Young Man Who Wouldn’t Raise Corn, Elizabeth LaPrelle on Fair Nottamun Town, and Robbie O’Connell on Pretty Saro among many others. One great example of a tune that mixes both traditional ballad and contemporary arrangement, both from Jean herself and the Nashville recording artists Alison Brown and Dale Ann Bradley, is the song Go Dig My Grave. And, for wonderful good measure, Pete Seeger, in one of his last recordings, performs the spoken word poem by Jean, I Celebrate Life.

One favorite piece of this production aside from the music is a piece written for the liner notes by Kentucky author, Wendell Berry. Here is an excerpt:

I remember attending a concert by Jean Ritchie at the University of Kentucky when I was a student.…The music she played and sang was clear and pure and elegant, very beautiful, and her presentation of it was completely forthright and unpretentious. She presented her songs fully as they were, and kept herself out of their way. She seemed to think of herself as a servant of what she had come to offer us.…The history of Kentucky so far is tragic exactly because of our failure to recognize and cherish and protect the precious exchanges by which the life of a given place and the human life given back may be made one life, enduring and sustaining. The paramount voice of that tragedy, and of the goodness and beauty of what we have lost, is Jean Ritchie’s – and by her gift it is ours, to help us to remember and to hope.

I couldn’t agree more. The songs themselves give me hope, but more importantly, the CD that I hold in my hand and in my heart gives me the most hope – that for the future. Jean Ritchie’s lifetime legacy is on this record and I cannot overstate my gratitude and honor to be a part of it.

Buy, download and hear cuts from the album at Compass Records

Here is the link for the “Dear Jean” Facebook Page

Award-winning recording artist and critically-acclaimed Bluegrass powerhouse vocalist, Susie Glaze has been called by BLUEGRASS UNLIMITED “an important voice on the California Bluegrass scene.”  Her album “Blue Eyed Darlin'” was the winner of  the Just Plain Folks 2006 Music Award for Best Roots Album and FolkWorks Magazine’s Pick for Best Bluegrass Album of 2005. “One of the most beautiful voices in bluegrass and folk music today.” (Roz Larman of FolkScene). Susie’s latest release “Green Kentucky Blues” and additional recordings can be found at www.susieglaze.com.