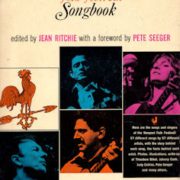 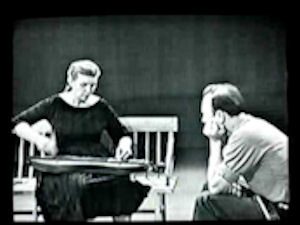 With the sad passing of Pete Seeger in late January I want to write this time mostly about Jean Ritchie’s long friendship with one of her most famous friends.

As I’ve written here in columns past, Jean Ritchie never expected to be the professional musician that she became. She went to New York and found herself swept up into the Folk Revival as one of its most authentic ambassadors for traditional music. And as part of that phenomenon for her and for American music, she met and worked with and became friends with such artists that became legends in their own time ~ and such was Pete Seeger.

Jean graduated from the University of Kentucky in 1946 and went to New York to study social work at the Henry Street Settlement. With her dulcimer she shared the 300+ songs with her school students that she had (and by “had” it was meant that she had them memorized) from growing up in a song-catching family. Eventually some parents and others who held contra dances heard her and her “exotic” instrument and asked her to play and perform at parties and dances. One introduction led to another and she was eventually introduced to the folklorist Alan Lomax. Lomax was so impressed with the authenticity of Jean’s songs that he asked her to record “everything she knew” for him. Those recordings eventually made their way then to the Library of Congress archives. Smithsonian Folkways also recorded Jean’s versions of the Child ballads (which I’ve written about before in this column). During that time Jean was asked to perform in concerts, on live radio with Oscar Brand, traveling shows with Clarence Ashley and then, to meeting Pete Seeger.

“I was backstage at some big auditorium, like Carnegie Hall, and Alan Lomax came up and introduced her to me.” “Beautiful young girl with a beautiful voice…wow!”

After that first meeting, according to Jean’s wonderful documentary Mountain Born, she found herself on concert bills with Pete often, thanks to the promotion of Lomax. Seeger was very interested in making sure traditional artists with authentic music were part of the huge new wave of interest in folk music, and it led to his artistic decisions for the onset of the beginning of the Newport Folk Festival.

Some of you might know that part of Pete Seeger’s legacy are the remaining recorded videos of his short-lived television show “Rainbow Quest.” (Many of these can be ordered on Amazon or sampled on YouTube now). Jean’s son Jon Pickow writes: “Mom was a guest on Pete’s Rainbow Quest program along with Bernice Reagon. They [Pete and Jean] appeared in concerts at Town Hall, Carnegie Hall, and later at Lincoln Center over the years. Peter and I got to play on some of those. [Peter is Jon’s older brother, Peter Pickow, and between the two of them they accompanied Jean on guitar, banjo, dulcimer and bass throughout the years.]

Here is Jean on Rainbow Quest Here she plays Shady Grove on dulcimer with Pete looking on:

“I guess it was in the late 40s and it seemed like at the time he was going to help bring folk music to this whole new electronic audience. But because of his left wing political views, Pete was soon to be blacklisted. He wouldn’t appear on television again for almost 20 years.”

Here is Pete’s recording of the classic East Virginia:

The Great Folk Scare ~ Quotes from The Front Lines

Pete Seeger: “Woody Guthrie came to new York in February 1940 and when Woody came up why this was a revelation to us, you could make up songs about what’s going on right now. Sure, you could sing the old songs…but you also could make ups songs about war and peace and later on atom bombs and lord knows what. Carry on the old tradition of making music reflect the times.”

“I think the connection between Jean and my dad and Pete Seeger and all those people probably has more to do with coal mining that with singing. It has to do with the formations of unions…and the struggle it took of common people to make a decent wage…”

“It always irked me that, coming up from Kentucky…that people would use my songs, my ballads, and make political statements with them…but after I met Pete and a few other people who were doing that … I was educated I guess as to politics a little bit. Now I never was called up by Red Channels or anything. I was listed in one little publication called Marxist Minstrels… they took something out of a book, saying I had been on a show with Pete Seeger…they took some of the old ballads and talked about…the Cherry Tree Carol and talked about how pornographic it was. This was a religious thing….!”

“It’s very ironic that this highly industrialized country should have had what they called the great Folk Scare.… I don’t look forward to anything like that happening again, it had a lot of bad things going on. Anybody can get a guitar and say “Well I’m a folk singer.” They didn’t think they had to live with the music a little while. And the television of course says give us something happy, give us something fast. No, Stay away from those sad songs! But you know, sad songs are some of the most important songs people sing. They had a show called Hootenanny. They were supposed to be hand clapping, big grins. Well that’s part of music but it’s only part of it.” 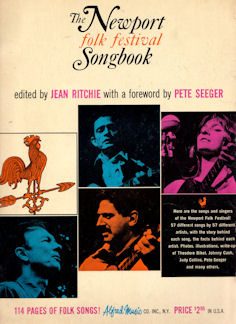 “Through Pete Seeger, I got invited to the 1959 Newport Folk Festival, I guess it was the first one…it was a commercial festival that year.”

“I don’t think mom was on the original 1959 Newport board. I think she was on the original board when the festival went non-profit in ’63. I think it was Pete’s influence that made the move to non-profit status possible. He wanted the board to reflect more diversity and brought in more musicians representing the different types of music – women, Afro-Americans, Afro-American women. Bernice Johnson Reagon was also someone that Pete brought in to the board. Pete and mom had wanted to showcase the lesser known traditional musicians and bring them to the attention of the public. The festival went on to become more commercial despite their efforts in an attempt to keep it going as general public interest waned in traditional music. Dylan’s famous “electric” scandal and such artists as Donovan and The Lovin’ Spoonful were signs of those times.”

Arlo Guthrie talks about how Woody and Pete wanted to make sure that Newport contained artists who were authentic and that it wasn’t based on a star system, in order to show the example that folk music was for everyone.

“I can remember on a foggy night being way out in the back and hearing her voice just floating out over the heads of everybody, through the fog, an extraordinary voice. Arlo Gurthrie had just finished telling the story of Alice’s Restaurant. Got an absolute ovation. I was the MC. Poor Jean, I pushed her on stage: “You have to follow it!” There she was, at the microphone in front of an audience who wanted to hear more of Arlo. She started out unaccompanied, singing Amazing Grace, this fantastic, fantastic melody…after the audience heard Amazing Grace you could have heard a pin drop. Ten thousand people or whatever it was there, they quieted down completely and were drawn into this amazing song.”

Even though Jean was initially shocked and slightly upset about the existence of politically motivated protest songs associated with her, she eventually grew to understand the need for such when she noticed that her native Kentucky was being slowly demolished by the hideous practice of strip mining. She had been asked by Pete to do a song for the Woody Guthrie memorial and so it occurred to her that she would write a song in the manner of Woody Guthrie himself. Jean wrote Black Waters and it was soon followed by her landmark songs on the Kentucky coal mining culture The L&N Don’t Stop Here Anymore and Blue Diamond Mines. These songs would go on to be covered by major stars like Johnny Cash, Michelle Shocked and Kathy Mattea among others.

Today and What They’ve Left

Here is a wonderful video of Jean and Pete singing Jenny Jenkins at Pete’s house in New York in February 2007:

As you can see, they believed that folk music is all about good spirits, love, community and laughter. It’s so wonderful that this is what they have left us, so we can remember how to sing and be happy in song.

And I include this video of Forever Young as a final tribute to Pete and his legacy.

Award-winning recording artist and critically-acclaimed Bluegrass powerhouse vocalist, Susie Glaze has been called by BLUEGRASS UNLIMITED “an important voice on the California Bluegrass scene.” Her album “Blue Eyed Darlin'” was the winner of the Just Plain Folks 2006 Music Award for Best Roots Album and Folkworks Magazine’s Pick for Best Bluegrass Album of 2005. “One of the most beautiful voices in bluegrass and folk music today.” (Roz Larman of FolkScene). Susie’s new release “Green Kentucky Blues” and additional recordings can be found at www.susieglaze.com.