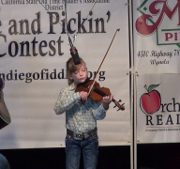 IS MUSIC A COMPETITION? 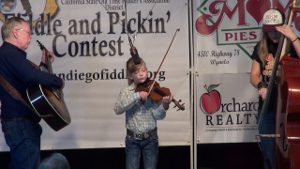 Folk music is many things. One of the things tied to music is competition. I don’t just mean that for a song to be number one on the top 40 folk parade, other songs won’t. I mean actual competitions. There are songwriting contests, battle of the bands, banjo and fiddle contests, etc.

I have entered music competitions. I have won, I have lost. I have been happy and I have been sad, though not necessarily due to not being the winner or loser.

I once entered the Cal State Fullerton Banjo and Fiddle Contest in the a cappella singing competition. I turned out to be the only contestant in that category. They chose not to award the category, so I was the only entrant but did not win.

Another time at the CSF B&F Contest I had to do a run-off in the flatpicking guitar competition. I was not at that time (or today) a good flatpicker. But competition was thin. I was a student at CSUF, but my competition in the run-off was not. He was about twelve. I whupped him good, as it turned out that the Yamaha School of Music had only taught him one bluegrass song. Luckily for me, I knew two. That same day fourteen Yamaha School of Music banjo players entered the contest and played Foggy Mountain Breakdown. Fourteen times. Exactly the same way. Fourteen times.

I entered the mid-level mandolin contest at the Follows Camp Bluegrass Festival and one of the competitors was Chris Thiele. I won. To ruin that story, Chris was about eight years old and I was about thirty-five. The only reason I won was that they bumped Chris to the advanced category, where he won easily.

Made it to the finals in a Long Beach Blues Festival band contest. My brother and I were the only acoustic blues musicians that day, and although we lost out to the Delgado Brothers (a must -see blues band) we did have the only hecklers that yelled out “Play some bluegrass!”

My favorite competition was the Marlboro Country Music Roundup. Our band made the regional semi-finals, but the only problem was that there wasn’t really a band. I had entered a recording of a band, but had used various buddies rather than having a real performing band. So I enlisted my brother’s band to play with me. They were not a country band, more of a jazz/acid/Hendrix kind of group, but versatile enough to suffice.

We showed up at Leo’s Little Bit of Country in San Marcos California, a big, nice, country bar and grill owned by a very friendly Korean guy named, oddly enough, Leo. I think there were about 6 bands competing. There were plenty of free cigarettes (this was before the bar ban on smoking) and free booze for the contestants. The bass player didn’t smoke but after having a few free drinks he did. And then threw up.

Anyway, we lost to a band that ended up getting a Nashville record contract and actually garnering a couple of hits. But I did go away with a smile on my face, because the band that came in second grabbed us as we left the stage to excitedly complement our performance, and the original songs we performed.

The last competition I was in was a bluegrass band contest at a horseracing track. We played very well at the contest, and a buddy approached me after the performance to tell me he never really liked the band, but our performance of all original songs was so strong he felt we would win hands down. We did not.

All things considered, I’m not a fan of competitions like these and although I’ve had some fun, I don’t know if contests really provide a good experience for all. But then again, what do I know? I’ve also backed up other players at contests, and seen the jubilation that occurs when a student musician is rewarded for their long hours of practice with a ribbon or trophy.

Contests usually are based on live performance, so attend anyway. Cheer on the performers, eat food that isn’t good for you at all, remember to wear sun block or appropriate clothing and don’t forget where you parked your car. Be careful because alcohol and outdoor events can be problematic, and marijuana and outdoor events can be…uh…um… What were we talking about?

IS MUSIC A COMPETITION