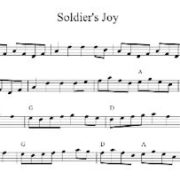 If You Can Only Learn One Tune

If you are new to traditional music, or new to playing without reading sheet music, Soldier’s Joy is the first tune you should learn by heart. Everybody knows this tune, regardless of genre! And that is a rare thing because I cannot think of any other tune that works equally well in bluegrass, old-time, Irish, Scottish, New England, jams/sessions.

Soldier’s Joy has been found in sheet music and dance instruction manuals from the 1700s and it is usually thought to be Scottish in origin. In the 1800s, the tune started to appear in numerous collections, usually classified as a reel or country dance, and arranged for a variety of instruments

Most musicians who played the tune did not learn it from sheet music and as a consequence there are many slightly different variations on it. It is still the same tune and different versions tend to work well together (or at least I haven’t come across an incompatible version yet).

Here is one version that I play. You’ll be welcome in Old-time, Irish, Scottish, and bluegrass sessions with it. 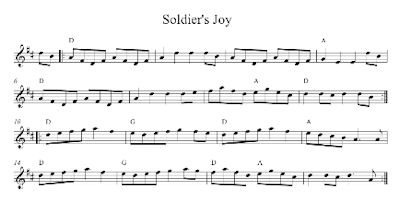 There are plenty of versions of Soldier’s Joy available on the Internet for free. One particularly energetic version was recorded by the Skillet Lickers in 1929.

Recorded on October 29, 1929 in Atlanta. The Skillet Lickers on this rendition of “Soldier’s Joy” feature what is considered to be the classic line-up of this crazy string band: Gid Tanner on fiddle, Riley Puckett on vocals and guitar, Clayton McMichen on fiddle and Fate Norris on banjo. “Soldier’s Joy” is probably the best known fiddle tune of all, with versions being found in Scandinavia and France. It has been known as “King’s Head,” “King’s Hornpipe,” “I Love Somebody” and “Payday In The Army.” Just about every old-time and bluegrass fiddler and banjo player knows a version. The title could refer to payday for soldiers or even opiates in light of the verse: “Well twenty-five cents for the morphine, and fifteen cents for the beer. Twenty-five cents for the old morphine, now carry me away from here.” It appears that the extra ten cents for the morphine could have been well worth it. (www.archive.org/details/Soldiersjoy)

If You Can Only Learn One Tune