IF I HAD A HAMMER:

The United States Senate censured Senator Joe McCarthy for what amounted to reckless endangerment of the US Constitution. The Senate’s action brought the most famous domestic confrontation of the Cold War era to a close—the Army-McCarthy Hearings, in which McCarthy tried to convict the army of harboring communists. The Senate’s action, however, was almost an afterthought: McCarthy had already been condemned in open court by attorney Joseph Welch, with the single most moving quote to emerge from the McCarthy era: “Senator, have you no decency; at long last, Sir, have you no sense of decency left?”

Those were the hearings that led my father to buy our first TV set; he didn’t want to miss them. Because of Senator Joseph McCarthy I got to watch Superman and the Lone Ranger. Thank you, Tail Gunner Joe. Twenty years later we watched the Watergate Hearings together; those were the only times I saw my father watching TV.

If I Had a Hammer, Folk singer Pete Seeger’s confrontation with HUAC—the House Committee On Un-American Activities—was still 8 months away. And the War in Vietnam was a mere whisper in a French tongue from Dien Bien Phu.

Edward R. Murrow took McCarthy on in See It Now—CBS News, March 9, earlier in the year, which I have excerpted below:

Today Senator McCarthy says he’s going to get a lawyer and force the networks to give him time to reply to Adlai Stevenson’s speech.

Earlier, the Senator asked, “Upon what meat does this, our Caesar, feed?” Had he looked three lines earlier in Shakespeare’s Caesar, he would have found this line, which is not altogether inappropriate: “The fault, dear Brutus, is not in our stars, but in ourselves.”

This is no time for men who oppose Senator McCarthy’s methods to keep silent, or for those who approve. We can deny our heritage and our history, but we cannot escape responsibility for the result. There is no way for a citizen of a republic to abdicate his responsibilities. As a nation we have come into our full inheritance at a tender age. We proclaim ourselves, as indeed we are, the defenders of freedom, wherever it continues to exist in the world, but we cannot defend freedom abroad by deserting it at home.

The actions of the junior Senator from Wisconsin have caused alarm and dismay amongst our allies abroad, and given considerable comfort to our enemies. And whose fault is that? Not really his. He didn’t create this situation of fear; he merely exploited it — and rather successfully. Cassius was right. “The fault, dear Brutus, is not in our stars, but in ourselves.” 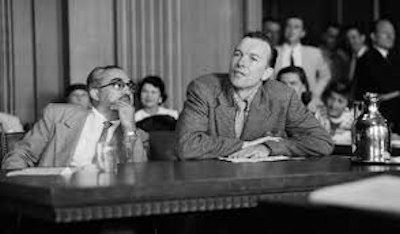 And one could say the same thing today, of President Trump. What else can you say of a president who insults our intelligence every time he opens his mouth? But what has this to do with Senator McCarthy? Nothing, I suppose. Except for one thing:–Roy Cohn. You see, it was Roy Cohn who overlapped these two gigantic ruffians, the two megalomaniacs who broke the bank of credibility and faith in one’s country.

Well, on December 2, 1954, we found a hammer—the US Senate censured Joe McCarthy. We found out that he wasn’t above the law. And today we have an impeachment inquiry for the president to determine if he is above the law. Roy Cohn was the attorney for both Joe McCarthy and later on for Donald Trump. Today that position is held by Rudy Giuliani.

You can do anything, but don’t step on my blue suede memories of the McCarthy Era, growing up in Los Angeles during the 1950s, where and when my father was subpoenaed to testify before HUAC in 1952—three years before Pete—for coming to the aid of the First Unitarian Church which had been labeled a communist front by the House Committee, and then the IRS as well, which tried to remove their tax exempt status that enabled them to stay open as a Church. My father was a tax attorney, and took their case. George T. Altman’s defense of the First Church eventually made its way up to the Supreme Court, where it prevailed and saved the church—which remains opens to this day.

The following year, June 19, 1953, the Rosenbergs were executed for espionage at Sing Sing Prison in New York State.

And the year after Senator “Tailgunner” Joe McCarthy charged the US Army with harboring communists and the Army-McCarthy Hearings began. Those hearings led to the most famous quote about McCarthy during his notorious career; it came from attorney Joseph Welch who finally in exasperation looked at the Senator and said, “Have you no decency, Sir; at long last, have you no sense of decency?”

Sixty-five years ago this month, December 2, 1954, McCarthy was finally censured by the US Senate and the witch hunts came to an end. It did not end the House Committee on Un-American Activities efforts to shut down democracy in America, but at least it stopped the worst oppression of minority voices in the land—the effort to destroy any faith in our major institutions reaching all the way up to the State Department and the U.S. Army.

If I had a hammer I’d keep on a-marching on the road to freedom, and my hammer would be striking fire. I would vote in the next election, and would vote for anyone the Democrats nominate to replace President Trump. We don’t need another McCarthy, or someone who is so close in spirit as to make the difference negligible. If anything, we need another Pete and Lee Hays, someone who believes in the power of song to make a difference. “If I had a hammer I’d hammer in the morning, I’d hammer in the evening, I’d hammer out danger, I’d hammer out a warning,… all over this land.”

And I’d remember dates like this one, because “those who don’t remember the past are condemned to repeat it.” What philosopher George Santayana (16 December 1863 in Madrid, Spain—26 September 1952 in Rome, Italy) said is still true today: “Skepticism is the chastity of the intellect. To covet truth is a very distinguished passion.”

We who believe in truth don’t talk about “fake news” and “alternative facts.” We don’t hold the line at Democrats and Republicans~ we build bridges over troubled waters, and believe in country over party.

We believe with Woody Guthrie, This Land Is Your Land, and with JFK and Gunnar Myrdal this is “A Nation of Immigrants,” and with Emma Lazarus, author of The New Colossus: 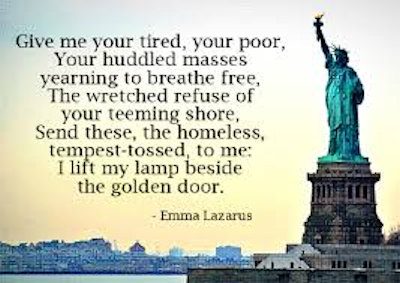 We have seen this noble dream die a hard death recently, at the southern border, with children locked in cages, and Dreamers told it’s too late to dream. But we who grew up in the 1950s and ‘60s will always remember that Martin Luther King had a dream too, that even an assassin’s bullet couldn’t kill. We still believe in his dream.

We who marched with Len Chandler and heard Bob Dylan and Joan Baez sing at the March on Washington will not rest until, as Dr. King said, “Justice rolls down like water, and righteousness like a mighty stream.” We who heard Joan sing We Shall Overcome are still marching and still dreaming—for gays and lesbians now, for environmentalists, human rights activists, and Native Americans, and we vote. Most recently we elected the very first African-American mayor of Montgomery, Alabama, the same segregated city that Mrs. Rosa Parks refused to move to the back of the bus for, and launched the Montgomery Bus Boycott for—led by a young preacher named Martin Luther King, Jr.

We haven’t forgotten those terrible times. We heard Pete Seeger sing If I Had a Hammer, and we heard Bob Dylan sing Blowing In the Wind. Who would have thought at the time that Dylan would go on to win the Nobel Prize for Literature? If that is possible anything is possible—even a small election. That is why we march and sing,

It’s the hammer of danger,

It’s the bell of freedom,

It’s a song about love between my brothers and my sisters, All over this land.

We believe with Cassius that “The fault, Dear Brutus, is not in our stars, but ourselves” that we get the government that we deserve. And it is up to us to change it.

As Carl Oglesby said, “Only the American people can do that. Only the people should.”

Ross Altman has a PhD in Modern Literature from SUNY-Binghamton (1973); belongs to Local 47 (AFM); presides over the Santa Monica Traditional Folk Music Club; and writes for FolkWorks; Ross may be reached at greygoosemusic@aol.com

IF I HAD A HAMMER