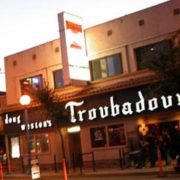 How The Troubadour Was Rescued From Becoming An Auto Parts Store 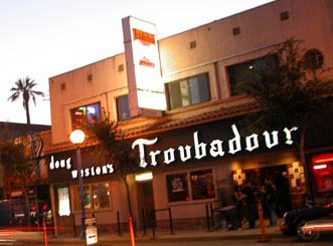 There seems to be renewed interest in the history of The Troubadour, the once-upon-a-time iconic folk club which still stands at the outer reaches of West Hollywood nuzzled against the green pasture esplanades of Beverly Hills. Reunions, old friends from ‘back in the day’ reconnecting. Reminiscences on Facebook. Yesteryear’s waitresses have become today’s stars. It’s precious.

So why do I wince? Permit me. The reminiscences and stories I read about ‘the good old days at the Troub’ all seem to begin somewhere around 1964 or 1965. Not true by at least ten banjo frets! Why? (You didn’t think I wouldn’t tell you, did you?). Here it is: if it weren’t for the serendipity of events chronicled below, the Troubadour would most likely have become an auto parts store or some such establishment by the time Crosby decided that he enjoyed harmonizing with Stills and Nash, and Joni needed to make a splash in Los Angeles.

So – grab an espresso from the hissy gargling machine below, climb the stairs to the left of the showroom door, take a seat in the balcony and ‘llow me to add a lick to the tune.

Los Angeles, winter 1960-61. Hardly a folk music Mecca…more yucca than Mecca. The Ash Grove was the Big Top of traditional folk and blues. The newer, more ‘commercial’ folk acts were mostly persona non grata. The ‘strip’ (Sunset Blvd from Laurel Canyon to Doheny) was peppered with a coffee house here and there. The Ice House was heating up but that was Pasadena, a two-lane nightmare away. McCabe’s in Santa Monica? Another trek to a distant shore. Yes, a jazz club or two was testing folksingers now and then but that was it. No one had heard of Bob Dylan. For a career in the commercial folk music market, the logical move was to a place called San Fransomething. The Kingston Trio drove that bus and The Smothers Brothers were riding shotgun.

In Los Angeles, it was the dark ages.

Down here, people were flocking to The Renaissance on the Strip to hear Les McCann play jazz and Lenny Bruce talk dirty. Jack Kerouac and Alan Ginsberg were the waning gods and folk music had the club crowd wondering why they should dress up to spend an evening at a joint that didn’t serve martinis. Red Foxx was telling dirty jokes on La Cienega Boulevard. ‘Folk clubs’ were mostly ragtag coffee houses with noisy espresso machines, no booze, Vespas parked outside, and patronage that favored poetry and chess over music. 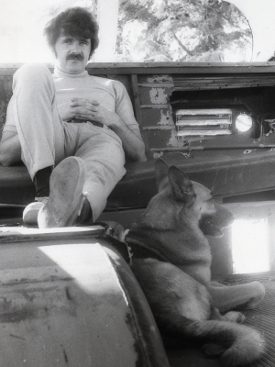 I hit town with my partner Paul Potash in a ‘49 Chevy with our pal Bob Hippard and Dink, my happy Shepherd pup that I had rescued somewhere outside of Minneapolis after a gig and before a long drive. Paul and I had just finished our second album for Columbia Records and our third appearance in Boulder, Colorado, where we were stars. Our last show was to a sell-out crowd at the University of Colorado and the buzz had followed us to California, or at least we hoped it had. Word had spread about us from Greenwich Village, which was still the undisputed center of the folk music universe in 1961. I think we were among the first wave of folkies to leave New York and head for the coast. It was a smart move for us. Winter in New York with no money can be a very persuasive.

In Los Angeles, we soon found out that we were the quintessential folk music misfits. Too polished for The Ash Grove which catered to the authenticity of the ethnic crowd, too smooth and not radical enough for the coffee house scene, not enough fancy chords in our music to qualify us for the jazz clubs (although for our first six months in L.A., our bassist was the legendary Charlie Haden – but that’s a story for later). Besides, we didn’t own suits.

On a friend’s advice, we phoned a guy named Doug Weston, owner of a venue called The Troubadour. It had featured jazz for a while, and a meager attempt at folk music. Doug met us on a street corner in Hollywood one chilly foggy June-gloom evening, and promptly deflated our dreams. He had no idea what he was going to do with The Troubadour if anything at all. Business had been sinking, the club was closing, and he was on his way to his sister’s to borrow enough to keep the doors open.

This was a logical question. Paul and I always tried to act like we understood business. We didn’t. Not a clue.

Doug told us that he would let us know after he talked to his sister.

“Where are you staying?” he asked.

So, being the quintessential business experts, we let two weeks slip by. Strategy? No. We lost his number so we left the number where we were staying on a note we slipped under the door of the Troubadour. Doug called and told us that indeed he would like to feature us at the Troubadour immediately.

We were so excited, we didn’t hear that part of the sentence…

The following Friday we showed up for work and sang our hearts out for Doug, Bob B. (the Troubadour Barista) and a handful of the Art and Paul faithful who had heard about the opening through the L.A. grapevine. It was mid-June 1961.

At the end of the first week, we had built a little momentum and since Doug still couldn’t pay us more than a few bucks each, we made a ‘deal’.

For the first three weeks of our engagement, Paul, Dink, and I slept in the upstairs dressing rooms of The Troubadour (Dink and I got the room to the left of the corridor that now leads to the lighting booth, and Paul got the one straight ahead). Barista Bob made sandwiches for us. Room and board. What could be better? Dink came to regard The Troubadour as her permanent home. (In the years that followed, when she would wander off from time to time, somehow, she always ended up at The Troubadour – once even after she wandered off from the rear door of The Ice House in Pasadena – that trip took her four days – I still miss her).

And the people started coming. And coming. Doug kept us for another week, another, and another. He was even shamed into paying us so we could afford to move out. Either that or the building inspector found out that we were living there with a dog.

By the end of July, business was so good, we moved into The Tropicana Motel down the block at the corner of La Cienega and took our meals in real coffee shops. Stardom and fame were sweet.

Art and Paul played The Troubadour fourteen consecutive weeks in the summer of 1961, starting in June and ending in September. I dare anyone else to make that claim. By the time we left, the folk music scene in Los Angeles had erupted and a flood of performers from all over the country were filling the clubs seven nights a week. Joe and Eddie, Bud and Travis, Steve Martin, The Smothers Brothers. Randy Boone was running Monday Night Hoots to sell-out crowds, Dickie Davis ran the light board, and every folk act you could mention eventually showed up. The rest is history.

And so, children, that is how Paul and I, with our laser sharp business acumen, saved the Troubadour and how it became the shining light in the magical city of Los Angeles and paved the way for those who followed – Linda Ronstadt, Roger Miller, Jackson Browne, James Taylor, and Carole King.

Those guys had it easy.

HOW THE TROUBADOUR WAS RESCUED FROM BECOMING AN AUTO PARTS STORE