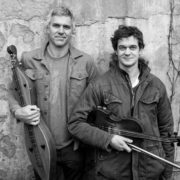 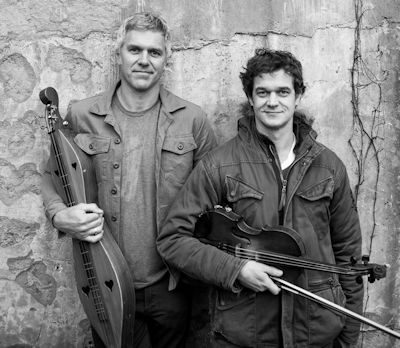 It’s been a wild year of intense devotion to old-time music. Producing the Old-Time Leprechaun-palooza, coordinating workshops for the Los Angeles Old-Time Social, learning and teaching at the Festival of American Fiddle Tunes, performing and teaching at The Berkeley Old-Time Music Convention, filming over 24 musicians for my “secret” old-time music documentary project, recording a project with Rafe Stefanini, wrangling together the 47th Santa Barbara Old-Time Fiddlers’ Festival and filming legends Brad Leftwich and Linda Higginbotham for an upcoming Tiki Parlour release. I’m experiencing the best kind of exhaustion a person can ask for. And I’m very thankful for it all.

While much of this was transpiring, there’s been a special project in the works. I’ve been working with a phenomenal Georgia-based old-time duo on their fourth release. Fiddler Jason Cade and his multi-instrumentalist Rob McMaken have released three critically acclaimed CDs as the old-time duo Hog-eyed Man. When the opportunity presented itself, I jumped at the chance to release their fourth album through the Old-Time Tiki Parlour label.

Like most things great in life, I first heard about Jason and Rob in the form of whispers and rumors such as: There is this astounding and hypnotic fiddler who plays in the old style and he learned from fiddle legend Bruce Greene since childhood! They’re making these CDs that look like the old Foxfire journals and they have old school fiddling with mandolin and dulcimer accompaniment! Then out of the blue, I hear about Clifftop’s fiddle contest winner in 2016. It wasn’t one of the old-timers of an earlier generation. It wasn’t a Berklee School violin prodigy either. It was Jason Cade. I started hunting for videos and sound clips and heard first-hand what everybody in the shadows were whispering about. Not only does Jason play with a classic old-time approach, but he and Rob have created a signature sound together. It’s simply mesmerizing and beautiful. On top of that they invite other musicians to join them on their recordings, like Beverly Smith and John Grimm who appeared on Hog-eyed Man’s third release. 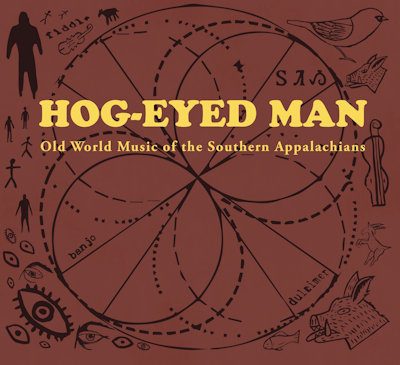 For their fourth release, Hog-eyed Man—Old World Music of the Southern Appalachians, they outdid themselves again. The ambience and beauty of Cade and McMaken’s duo magic is colored and accented by the playing of four guest musicians. Tom Baker plays fingerpicked and clawhammer banjo and the rock-solid rhythm section of Nancy and Charlie Hartness (also on the Skeleton Keys release) are on guitar and ukulele. Legendary singer, folklorist, artist, banjoist and Grammy winner Art Rosenbaum also makes a memorable guest appearance on a few tracks.

In a visual collaboration with Howard Rains, the CD package and booklet showcase a curious collection of primitive imagery juxtaposed with the alchemical-looking diagram of the Blumlein stereo recording technique. This technique was used to record the album.

Recorded entirely live around two ribbon microphones, this album transports the listener to an intimate kitchen session, where the musicians comfortably settle in on twenty lesser-known gems mined from deep Appalachia. Drawing primarily on the archaic fiddling traditions of Eastern Kentucky and Western North Carolina, the nuanced and powerful performances essentially re-envision southern old-time tunes as if radio, the folk revival, and bluegrass never happened but the music instead continued to organically develop along some alternate path. Many of the tunes on the album tap connections to the traditional music of Ireland, Scotland and England, while other pieces are associated with Native American fiddlers and history.

Throughout, Jason and Rob manage to let their own voices emerge as authentic interpreters of the tradition while remaining true to the wild, lyrical, and unvarnished aesthetics of the source fiddlers who they revere. The result is a captivating album of deep-vein Americana—gritty, emotionally rich, and timeless. The vivid recording quality combines with the thoughtfully interwoven strands of almost-lost musical sensibilities to give Old World Music of the Southern Appalachians a rustic-yet-refined sound like no other. This album is destined to become a classic!

The CD is available online as of Nov. 2, 2018 from oldtimetikiparlour.com.  Enjoy the trailer as well as four exclusive Virtual Reality videos filmed by Steve Bransford. Drag the cursor to rotate around the room and focus on any musician you desire. You can also purchase Google cardboard VR goggles to have an immersive VR experience with your smartphone while watching Hog-eyed Man do their thing. Cheers!