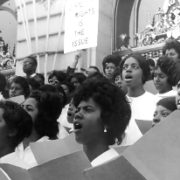 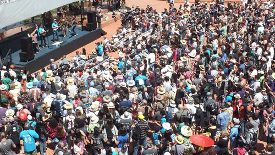 Sharing with you my explorations of traditional folk/ethnic/world music (pick your terminology) has been a joy. In my final Folk Beat column, I want to celebrate Southern California’s musical abundance by presenting examples of venues hospitable to these performing arts.

First we visit the Japanese American Cultural and Community Center in L.A.’s Little Tokyo. Its 880-seat Aratani Theater is one of nation’s largest venues displaying ethnic arts and culture. I’ve enjoyed presentations as diverse as classical dancing from Southern India, songs evoking village life of Bulgaria, Hawaiian slack key guitar instrumentals by Keola Beamer, the chimes and gongs of Balinese gamelan, ensembles, and classical Spanish guitar compositions performed by the Romero family of virtuosos together with Daniel Ho, who had adapted these pieces for the ukulele.

Turning our sights north to Hollywood, we find an outdoor venue that showcases diverse performance traditions. Nestled on a hillside, the 1,200-seat Ford Amphitheater has an ample outdoor stage, excellent sightlines, and, incidentally, a pleasant area for pre-show picnics. I recall the sizzling intensity of superb tango dancers twirling and gliding. This was all the more exciting because we had watched tango dancers in Buenos Aires the year before. The variety of ethnic groups represented at this venue matches that of the Aratani.

Just up the hill from the Ford stands another outdoor venue, a massive one. Every summer, the Hollywood Bowl touts its world music program. It is impressive, all right. I’ve attended concerts of Lila Downs, Keali’i Reichel, Caetano Veloso, and Weird Al Yancovic. Okay, Al doesn’t belong. Let me share what interferes with a wonderful world music experience. First, there’s the inevitable, unavoidable opening act. Whether uplifting or disappointing, it robs us of time with the artist we came to see. Speaking of “see,” unless you sit in the comfy, pricy boxes close to the stage, one feels remote from the flesh-and-blood performers. Furthermore, do giant video screens that project the stage action solve this problem? Please. If I wanted to watch videos, I’d enjoy DVDs from my comfy couch. Moving on… 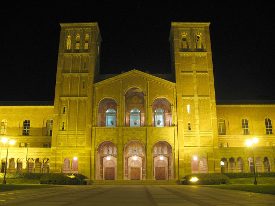 One way of assessing venues is to focus on a performer. Oaxacan vocalist Lila Downs has thrilled audiences at several Southern California venues, among them the 2,265-seat Disney Hall, 1,800-seat Royce Hall at UCLA, and 17,500-seat Hollywood Bowl. I’ve seen her at all three venues. Royce Hall was the most hospitable to her talents. She performed there without an intermission for about an hour and a half. One saw the vibrant projected backdrops that accompany her many of her songs: a politically-tinged one triggers a rapid montage of faces of Mexican immigrants; a series of traditional textile motifs accompanies a song with a Oaxacan folkloric theme. By contrast, at Disney Hall Downs performed on a rather bare stage following a forgettable opening act. For some reason, there were no projections behind her. At the Hollywood Bowl—you know what I’m going to say. She also has performed in places that are not, strictly speaking, concert venues. At the Hollywood Forever Cemetery, we witnessed her standing on a relatively small platform, singing her heart out during a late-night Day of the Dead celebration. Looking out on countless candle-lit, marigold-draped gravesides, she seemed totally in her element. 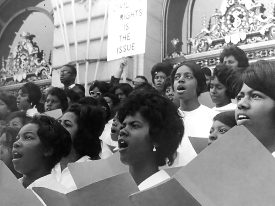 A choir sings for Civil Rights on the steps of City Hall, 1960’s. Photo courtesy In Our Own Image.

Museums often serve as venues for music. About 10 years ago I visited an absolutely stunning multi-site, multi-media exhibition on African traditional music. In one room at the Fowler Museum at UCLA, you could touch and play African instruments. The L.A. County Museum of Art exhibit included performances by African musicians playing instruments such as the kora. The California African American Museum (CAAM) presented a fresh cultural perspective. As a matter of fact, CAAM recently opened an extensive exhibition focusing on gospel music. The history it traces begins in the 1850s with Biddy Mason, a slave from the South who migrates to Southern California and plants the seeds of a new musical genre. Feel the spirit? Take in How Sweet the Sound: Gospel Music in Los Angeles.

Parks, plazas, and closed-off streets often showcase ethnic music and other arts. Southern California’s mild winters are perfectly suited for a day partaking of vibrant Chinese New Year festivals. I’ve spent time at the one in L.A.’s Chinatown, but you’ll find them in Alhambra, Monterey Park and San Gabriel as well. L.A.’s 2018 event included the annual Golden Dragon Parade, a musician playing an ancient zither called the guzheng, the Traditional Southern Style Dragon and Lion Dance, and a calligraphy demonstration.

While Chinatown’s celebration came to North America over 100 years ago, a cultural transplant from Mexico arrived much more recently. The original Guelaguetza takes place in the State of Oaxaca every summer. It showcases traditional dance groups from all regions of the state. The outdoor stage, built especially for the Oaxaca City extravaganza, is surrounded by low grassy hills where low-income spectators sit to watch the dancers. Ticketed seats are considerably closer to the show. A special section that accommodates VIPs is relevant to L.A.’s transplanted Guelaguetza because among the dignitaries sits a young lady chosen to represent presiding the Mexican corn goddess, Centeotl. Despite various permutations of the tradition following its arrival north of the border, I can vouch that Oaxacan immigrants carried Centeotl from Southern Mexico to Southern California. I saw one fairly lavish Guelaguetza held indoors in a downtown indoor athletic amphitheater and another more modest one outdoors at Normandie Park, on the outskirts of Koreatown. At both, young Goddess Centeotl sat with the VIPs.

How could I end this survey without a few words about venues for Hawaiian music and hula? For 20 years, living legends and rising stars have graced the stage of the Shannon Center for the Performing Arts at Whittier College. Two that particularly enthrall audiences are young songbird Raetea Helm and ageless vocalist Robert Cazimero, who also is a kumu hula of the award-winning male dance troupe he brings to his shows. The Hawaiian Music Masters Series at Irvine Barclay Theater also deserves mention. In spring 2018, it will bring together to its stage the acclaimed slack key guitarists George Kahumoku, Led Kaapana, and Jeff Peterson. Moving (probably very slowly) north to Long Beach, we find the Terrace Theater at the Long Beach Convention Center, where every Labor Day weekend, some 20 hula halau perform in the E Hula Mau Hula and Chant Competition. Finally, among dozens of Hawaiian community, concert, and festival performances in Southern California, two are especially notable. The Southern California Slack Key Festival is held at Redondo Beach Performing Arts Center in January. The Los Angeles International Ukulele Festival takes place in September at Torrance Cultural Arts Center.

About ten years have passed since I started this Folk Beat column. My explorations would not have reached print or the Internet without multi-talented FolkWorks founder-editors Steve and Leda Shapiro. I am grateful for their trust, kudos, encouragement, and, in the face of looming deadlines, patience. Who knows? With their blessing, my byline could appear on the occasional article—ETA undetermined.