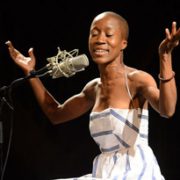 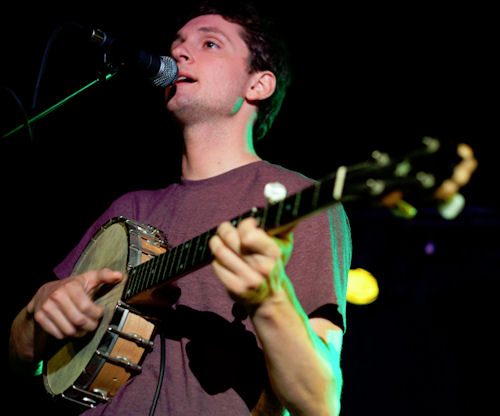 The memories of the mighty flowin’ river’s currents and eddies over a full summer and early fall of live music have faded somewhat, but many a highlight—and a few lowlights—remain as crystal clear in memory as a mountain stream. Speaking of ebbing and flowing, two shows at the Bootleg Theatre in L.A.’s “Historic Filipinotown” (where few Filipinos live any more) offered about as jarring a contrast in sound quality as one is likely to find, the equivalent of a gentle riverine burble and the raging torrent of a snowmelt-gorged waterfall falling on top of your head.

In early June, Sam Amidon embraced the quiet, the pastoral and the eerie bittersweet with his plainsong made modern, letting the occasional dissonant outburst punctuate the space like a nightbird’s plaintive screech on a country night. The October L.A. debut of Tal National from Niger, West Africa, however, featured a decibel level and barely differentiated wall-of-sound mix that might have worked in a much larger, possibly open-air venue but not in the relatively modest confines of the Boot bar. Too bad, since the Niamey combo has the power to induce some mighty Hausa, Fulani, Songhai, Tuareg and related trance-dance grooves—which my booty did eventually accommodate, despite the din–but the sonic blast (It. Was. Fucking. Loud.) forced this reporter to stuff Kleenex in the ol’ ears before any blood was drawn. I still recommend the group’s just-released first U.S. album on Fat Cat, Kaani, a hearty slice of funky ethno-rockin’ fare. The energized ensemble playing evident on the disc also underscores another failing of the live show—the stripped-down road group lacked the all-important interlock of a second guitarist.

One thing the two Bootleg gigs did have in common: woeful underattendance, especially for the African show. This marks the third significant time over the past couple of years that bands from the Motherland have suffered from severely disappointing turnouts, the other shows being Khaira Arby’s initial soulful turn at the Echoplex and Staff Benda Bilili’s joyous celebration at El Rey.

Another pair of live-music bookends, both with decidedly stellar sound engineering, took place at the acoustically awesome and picturesque John Anson Ford Theatre in the Hollywood Hills. In mid-May, Richard Thompson and the other two-thirds of his trio delighted the audience with a career-spanning set that dove deep into his latest masterwork, Electric, as well as selections from Fairport Convention, his work with ex-wife Linda (“Wall of Death,” naturally), his vast solo oeuvre, and even a cover of Cream’s “White Room” in a nod to potent power trios of the past. 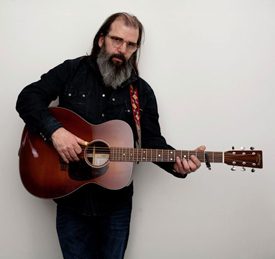 Flash forward to October when Steve Earle and the Dukes and Duchesses (just one duchess actually, the mucho talented Eleanor Whitmore) rode into town and delivered a raucous, tender, fun-lovin’ and pissed-off two hours of selections from the hardcore troubadour’s songbook at a third-full Ford. His sturdily crafted, stylistically diverse new album, The Low Highway (New West), was played pretty much in its entirety over the course of the show (tearjerker alert: “Remember Me”), while the endearingly raggedy-twanged Texas lefty and his pals also reminded the crowd why “Guitar Town,” “Copperhead Road” and “The Revolution Starts Now” rank as classics of alt-Americana.

Between doffing and donning one or the other of his many purty guitars, banjos and mandolins, Steve cracked wise with a combination of self-deprecating and Establishment-berating banter. (Example of the former: when he used to drink and got really plastered, he truly believed he could speak Spanish—he couldn’t, despite being from “Occupied Mexico”) He dedicated the set to Philip Chevron, guitarist of the brilliant-infamous Pogues and sometimes songwriter (the beautiful “Thousands Are Sailing” is one of his), who had passed away a few days and then closed the show with a nod to the late Levon Helm via a spirited cover of “Rag Mama Rag.” Few of the post-Dylan, post-post Woody Guthrie generation of singer-songwriters have delivered as much acute social commentary and unsettling tales from the collective populist heart as the garrulous ex-junkie Mr. Earle.

Looking downstream, several memorable moments and performances from the past few months jump out of the big musical river like Chinook salmon. (OK, the fish get airborne going upstream, but you catch my drift.) The shooting star (yes, a literal meteor) that blazed across the sky at the Skirball, as Maria Muldaur and the Campbell Brothers mixed up their gospel and blues concoction. The epic Grand Performances scene when Estrela Brilhante served up a steamy slice of Brazilian maracatu-infused carnavale percussive rumble, replete with the scaled-down samba school marching around the California Plaza watercourt that sucked many of us into a delirious second-line dancing-fool vortex. Vieux Farka Toure continuing to seek and find inspiration at the Malian-blues-rock crossroads during his Levitt Pavilion Pasadena rave-up. The shockingly high level of musicianship in service of the trance from Aziz Sahmaoui and his Gnawa University combo at Grand Performances. The unfortunate jibber-jabber and lack of respect for the music shown by many of those around us at the Bombino “he should have headlined” show on the Santa Monica Pier. 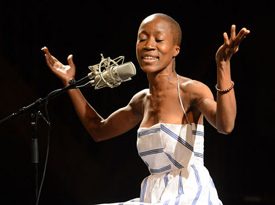 Turning our attention to what will be flowing down the river to our burg in the coming months, one show stands out: worldly Malian songstress Rokia Traore, performing November 23 at the Luckman Theatre at Cal State L.A. Her just-released (in the U.S.—been out awhile in Europe) and aptly named “Beautiful Africa” finds the beguiling Ms. T channeling her roots with her feet firmly planted in the new millennium on tracks like “Kouma” and “Ka Moun Ké.” Not possessed of a hair-raising, force-of-nature female Malian voice like Oumou Sangare or Kandia Kouyate, Rokia nonetheless has a remarkably emotive—and empathic—vocal instrument, with a band that rides her surges, parries, and hushes with panache. She not a prolific album-releaser and doesn’t tour North America often, so this show should be special. (Click here for link to a late September NPR interview with Rokia.)

Finally, if you haven’t seen the film “20 Feet from Stardom,” I wholeheartedly recommend that you do so at your earliest opportunity. The finely nuanced, heartfelt documentary about the life and trials of Merry Clayton, Darlene Love, and other amazing pop/rock/soul back-up singers of the past 50 years is moving, joyful and resonant. Take heed, music lovers!

Over nearly three decades of writing about that mighty flowin’ river of sound for dozens of different publications, Tom Cheyney has forgotten more cool tunes and great shows than he can remember, but still keeps coming back for more. He lives in northeast Los Angeles with his wife Cassandra and daughter Brenna.