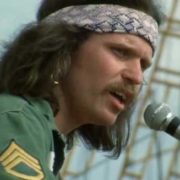 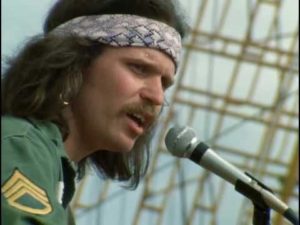 FolkWorks readers may remember Country Joe and the Fish, particularly for that iconic moment at Woodstock where “Country Joe” McDonald took the stage and shouted what is euphemistically known as the “Fish Cheer” in polite company. But there was nothing polite about opposition to the Vietnam War, and the famed four letter word intro to his I-Feel-Like-I’m-Fixin’-to-Die-Rag (note: it wasn’t “fish”), has cemented its place in history. For those who aren’t familiar with this, or simply want to relive the moment, you can find it on YouTube:

Joe’s anti-war activism continued through the mid-2000s when he joined Cindy Sheehan and others in protesting the war in Iraq. And, at age 79, Joe is still a busy man – releasing an album entitled 50 in 2017. He was also planning to perform at a scheduled Woodstock 50th anniversary festival in 2019 but unfortunately the event was cancelled.

One of the most interesting things about Joe is his appreciation for and commitment to the nursing profession. He had a wife, as well as a brother, who were nurses. His interest in nursing also grew after he heard an Army Vietnam War veteran nurse give a first person account of the issues faced by battlefield nurses. Ultimately, Joe became an advocate for and educator about the nursing profession. And, as he is a musician, some of this work includes a four song album entitled “Thank the Nurse.” Here is a recording of the title track:

What is noteworthy to me about the song, as well as the general content, is the fact that the nurse is not assumed to be female as is so often the case. More and more men have been entering the profession; the current President of the American Nurse’s Association is Ernest J. Grant, whose biographical information may be found here: Ernest J Grant Bio.

The album also pays tribute to famous nurses Florence Nightingale and Clara Barton, as well as The Girl Next Door, a tribute to an unnamed nurse who also served in a more recent war zone. The lyric “they sent her off to war and showed her death and pain, and the girl next door will never be the same” confirms Country Joe’s steadfast anti-war legacy.

Joe also recorded a version of his song Clara Barton with the Grateful Dead’s Jerry Garcia:

Unfortunately, none of Country Joe’s songs feature an N-U-R-S-E cheer.

Music is not Joe’s only gift to the nursing profession. He has developed considerable expertise about the life and work of Florence Nightingale, much of which can be seen on his dedicated web page about her life and work on the battlefield in the Crimean war: http://www.countryjoe.com/nightingale/.

In 2015, Country Joe gave his entire archive of work about Florence Nightingale, consisting of “7 oversize boxes” of material, as well as his website, to the University of California San Francisco. His written interview about the collection is well worth the read and can be found at: 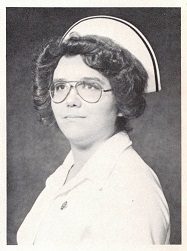 A recent meme that made the rounds on Facebook said “A nurse is like the swiss army knife of healthcare providers and will find ten million ways to save your life.” Prior to the COVID-19 pandemic there wasn’t a lot of news coverage about the day-to-day work of the nurse, but today’s nurses have been more visible than ever since the spring of 2020.

Although I no longer work as a clinical nurse, as a nurse-ethicist I often have the privilege of speaking to nursing students at several Southern California universities. Each and every time, I have come away from those presentations encouraged and excited about the future of the nursing profession.

Oh, and that black and white photo that accompanies this column? Yep, that’s yours truly. Thankfully, some things in nursing have changed.