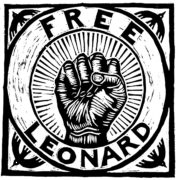 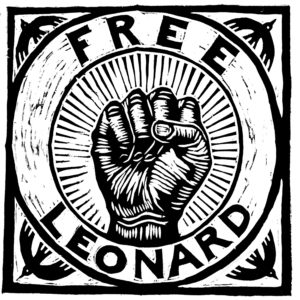 I was thinking tonight about my heroes. But how often do we stop to think about our heroes’ heroes? To wonder who inspired the folks that inspire us, and why? How can we take that energy and manifest it in our own lives for our own communities to benefit from?

Anyone who knows me (even only from the internet) knows that Joe Troop is one of my heroes. “Free Leonard Peltier,” Joe’s latest political anthem, is a beautiful acknowledgment of one of Joe’s heroes and a powerful call for his freedom from the United States Penitentiary, FCC Coleman in central Florida. Incarcerated for an appalling “forty-five long years and counting” (as Troop sings), his imprisonment based on inconclusive evidence and recanted witness accounts, the now-elderly Peltier is ailing (1). Produced by Jason Richmond (one of the premier sound engineers/mixers/producers in the folk/Americana scene), this song makes the case for his clemency.

“If you have heard of Peltier, then you know how problematic his imprisonment is: The blatant 1970s-era racism against Indigenous people that he was up against. The fact that all of Peltier’s co-defendants were acquitted based on self-defense. The reality that the FBI was at least partly responsible for the shootout that day. The admission of U.S. government officials that Peltier’s trial was so flawed he should be released. The decades of outcry from Indigenous leaders, members of Congress, celebrities and human rights leaders, including Pope Francis, the Dalai Lama, Nelson Mandela, Coretta Scott King and Amnesty International, an organization otherwise focused on political prisoners in other countries.” (2)

Not only is this song a call for freedom, but it is also a sincere wish for strength within and support for Leonard Peltier’s Walk to Justice, a spiritual walk from Minneapolis to Washington DC coordinated by the American Indian Movement. Joe will join the marchers on November 14th for the final leg of the Walk to Justice into Washington, D.C. He will also perform the song at rallies on the 14th and 18th.

Featuring a holy host of Native collaborators and activists, more heroes of Joe’s, the song and the accompanying music video (both of which can be accessed here) embody the values that have made folk music such a force in social movements, not just in America but across the globe.

The music video was directed by Rode Díaz (Kachikel Mayan, Indigenous Guatemalan) of Iximche Media and (as stated in the official press release) “focuses on how the Native musicians interact with the four elements (fire, water, earth, air) and invokes a collective prayer for Peltier across time and space, while rooted in the same land.” It’s a wonderful and deeply moving experience to watch Joe and his collaborators contribute to this movement. It reminds me why I fell in love with Joe’s music to begin with. Not only is the musicianship dynamic, intentional, and impeccable without fail, the message is right there in the center – loud and proud.

In Prison Writings: My Life Is My Sun Dance, Leonard Peltier wrote: “Silence, they say, is the voice of complicity. But silence is impossible. Silence screams. Silence is the message, just as doing nothing is an act. Let who you are ring out and resonate in every word and deed. Yes, become who you are. There’s no sidestepping your own being or your own responsibility. What you do is who you are. You are your own comeuppance. You become your own message. You are the message.” (3) This is a concept that Leonard and Joe embody, one we should all strive to embody. Silence is impossible. Silence is its own scream. Picking the devil’s eye isn’t just about finding personal strength through music. It’s about using music to speak out about what is right and just. It’s about music as a vessel for freedom.

I encourage you all to purchase and stream this track as well as watch the music video. All proceeds go to the International Leonard Peltier Defense Committee. Let’s make some noise.