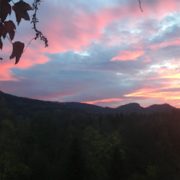 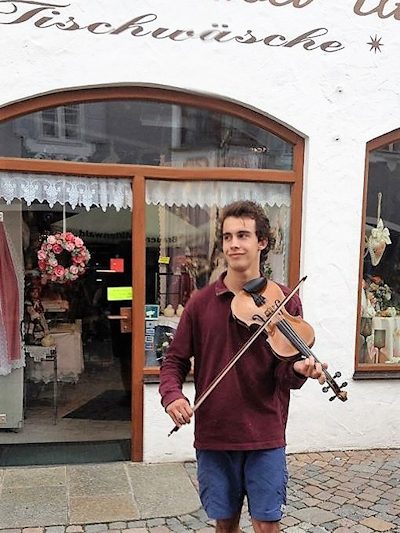 How difficult is it to break into a music scene? Not very, you just have to get the ball rolling on your own.

I moved from Southern California to Davis for school four years ago, and found it to be a hidden gem of music. Between bluegrass jams, punk rock in kitchens and basements, and a solid group of Irish trad musicians, I had plenty of music in my life. But I landed a cool programming job in Germany after I graduated, and decided I would have to leave Davis behind for now.

I started my new life in Frankfurt in July with two suitcases, a fiddle, a banjo, and a bicycle. I live in a small apartment near a large freeway crossing, but I still have a pretty bike ride to work. With work and a commute straightened out, I focused on finding some musicians. I was craving tunes.

I found a lively session midway through my first week. It was a Wednesday evening in the middle of summer and there were a good number of people hanging out in Frankfurt Art Bar’s beer garden, with plenty of bikes parked outside and kids running around. The internet told me there might be a session here once a month, and I wasn’t expecting anything large. But when I walked in, there were about a dozen or so players midway through a set of reels. As I ordered a beer, a banjo player crowed out “A, moll!” and the set ended on a familiar A minor tune. The banjo player, a well-known player in the region named Ekhart, got up for a smoke, told me to take out my fiddle and join in. I sat myself in between his banjo and a singer who was visiting from Ireland. I later noticed about eight dancers on the other side of the bar, dancing to every set and capturing their own audience. The session went late, and I was so excited biking back to my apartment at 1 am that I got lost. In a new city, it takes a while to figure things out.

However, this session only happens once a month. Playing so seldom was beginning to get to me, so at the October session I gave my phone number to a concertina player, and said, let’s play before November. She told me sure, but first I had to write my name down next to the number. She introduced herself as Ingeborg. Five days later, Ingeborg called me, and told me to come to an event at the end of the month. The German Uilleann Pipes Association (DUPG) was organizing a two-day Tionol in another state, Baden-Württemberg. It would be held near Balingen, a small southern town under the Swabian Alb. 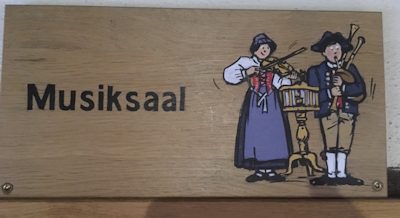 I started off somewhat late and unprepared (my fiddle case and a book for reading) on a journey that took multiple trains and buses. I hadn’t booked a room for the night – I had decided I would either take the last bus home, or play all night and take the first bus back. It would depend on the sessions and the musicians I would soon meet.

After some train rides and several buses through the forest, with a jolly bus driver and some locals who spoke to me in thick Swabian dialect, I made it to the “Haus der Volkskunst”, or House of Folk Arts, a mile by foot from the last bus stop on the outskirts of Balingen. The area is quite pretty, in the foothills of the Swabian Alb. Surrounded by green hills and under grey skies, the old building was a good place for a weekend of tunes. 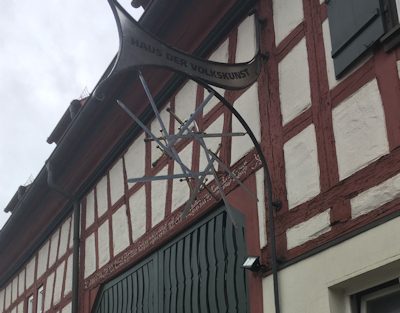 Outside of the Haus der Volkskunst.

I hoped to see at least one person I knew there and Ingeborg was the first person I saw when I walked in. Horrified that I had no place for the night (and probably my general state of unpreparedness – no luggage, just a fiddle?), Ingeborg pulled some strings and landed me my very own six-bunkbed room, upstairs from a fifteen-person session. It turned out that she used to be the organizer of these events and has plenty of sway. I saw two other players from the Frankfurt sessions, a piper and a flute player and played with them for a while. Another significant number of players in this session had come up from Lake Constance, which is about an hour south of Balingen. 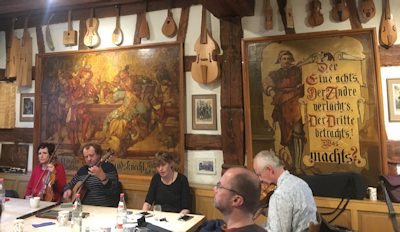 Main session at the Haus der Volkskunst, but I would find myself in a neighboring building for most of the night.

After two hours of playing, I got up and promptly ran into Ekhart, the banjo player from Frankfurt. All of the core people from the Frankfurt session had made it out to Balingen, apparently. Ekhart led me to another building, right next door, where a smaller upstairs session was in full swing. One fiddler finished up a fiery set of reels, then welcomed me to sit down in a perfect American accent. First intimidated by the quality musicians surrounding me, and seemingly the only person who didn’t know over half the tunes, I eventually opened up as the night progressed. That’s often how sessions go, especially for an outsider. For how good these players were, they were particularly welcoming. There were two bouzouki players strumming expertly around each other, one of whom was the Tionol’s organizer, Barbara. Two players from Frankfurt sat across from me, and eventually, Ingeborg came with her concertina. It was refreshing to break out of normal session tunes, into tunes I hadn’t thought about in years, with musicians I barely knew, in the middle of the German countryside.

10 stringed bass bouzouki holding the upstairs session down well into the night – he was still going when I went to bed a little after 3:00am.

After finishing a tune I had learned off a Dervish album because I liked the backbeat lent by Cathy Jordan’s wooden clappers, Ingeborg told a story about the time she had to lend the Dervish lead singer her wardrobe for a week after a luggage mix-up. Irish music is now found worldwide – but it’s still a tight community.

As the night wore on, we played through the hour of 2:00am twice because it was the European daylight savings time change. The extra hour of tunes was welcome. Around 3:30am, knowing there would be another session later that morning, I found my way to my room, chose a bunk bed, and slept for hours. 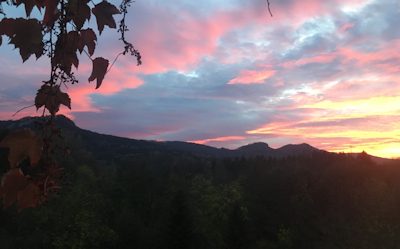 Silhouette of the Swabian Alb from the hallway window outside my room.

There was plenty of time for tunes the next day, but eventually people started leaving. The American fiddler had his own session to lead in Freiburg that night, and the Lake Constance group also has a session in Constance on Sunday nights.

Though I had to go out on a limb a few times, I finally found a good community of Irish musicians in southern Germany. I could look forward to the November session at the Frankfurt Art Bar in a couple days. Luckily, I now know of plenty other sessions and have played with some more musicians, and it won’t be the only time I play this month.

In terms of finding trad musicians in a new area – Take the first initial steps to seek out some opportunities, and then the nature of the music scene will pull you the rest of the way in.

Obin Sturm is the son of Roland Sturm and Kathy Bawn who live in Santa Monica.