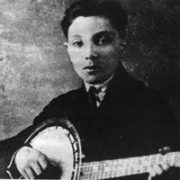 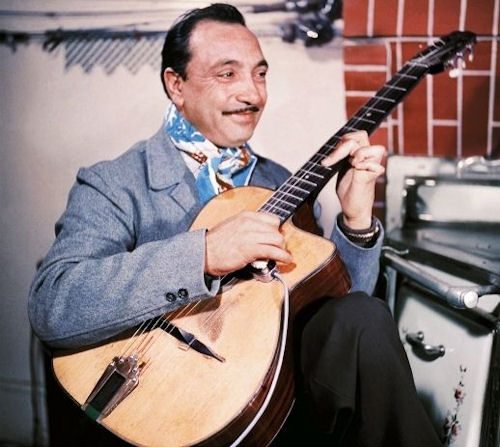 His name conjures up the terms “Gypsy Jazz,” “Hot Jazz Guitar,” “Le Jazz Hot,” and “Jazz Manouche.” Gone for 59 years but far from forgotten, Django Reinhardt has inspired countless guitarists and ensembles to honor his memory with both imitations and innovations. In fact, a Django fever of sorts seems to be afoot. The recent Martin Scorsese film Hugo features a character that portrays the founder of the Quintette du Hot Club de France. French jazz guitarist Stéphane Wrembel composed “Gypsy jazz” music for Woody Allen’s film Midnight in Paris and performed on the 2012 Academy Awards show. Django tribute concerts and “Gypsy Jazz” festivals abound throughout Europe and North America.

In our Southern California backyard, a multi-ensemble musical project known as In the Footsteps of Django begins a North American tour this fall with a concert at the Redondo Beach Performing Arts Center on October 6. The musical credentials are intriguing. Bandleader/guitarist Lulo Reinhardt is a grandnephew of Django. A native of Germany, he grew up playing “Gypsy jazz,” but most recently has been focusing on Latin jazz with his Lulo Reinhardt Latin Swing Project. Another ensemble, Les Doigts de l’Homme (literally “the fingers of man”) is described by Guitar Acoustic as “one of the best interpreters of Django’s music while keeping their own personal and colorful jazz style” and by the publication Ouest-France as a band that “brings a hint of world music,…energy close to punk bands, and an unmistakable authenticity.” Rounding out the Footsteps program is Norig, a “Gypsy jazz”-inspired French singer with Catalan roots, whose first album is titled Gadji, the Roma word for non-Roma.

Django Reinhardt most definitely drew from elements outside his musical roots, but do Latin swing, punk rock, and world music follow in Django’s footsteps? Do they emulate his fantastic fingers?

Who’s to say no? I am certainly interested in finding out at the October 6 concert. Perhaps you will be, too. In the meantime, let’s explore the origins of “Hot Jazz Guitar,” Django’s legacy.

Most people whose ethnic roots were once labeled “Gypsy” now prefer to be called Roma. In the world of jazz, however, the term Gypsy has persisted, possibly because so many non-Roma are playing the music. In any case, Romani music and its practitioners originated in northern India. Their extensive nomadic travels brought them in contact with Greek, Arabic, Persian, Turkish, Czech, Slavic, Romanian, German, French, and Spanish musical traditions. While absorbing new musical elements, they retained a Romani style characterized by soulful vocals, chromaticism, and prominent glissandi between the notes. Fast Romani melodies often were accompanied by tongue-clacking, handclapping, and the clicking of wooden spoons. Spanish flamenco is largely derived from the Romani people of Andalusia.

In the Europe of centuries past, Roma musicians became professional entertainers, distinguishing their bravura performance music from the folk music they played within their family circles. In Eastern Europe, the professional ensembles tended to include a cimbalom (a type of hammered dulcimer) along with violins. Western European Roma ensembles sometimes dropped the cimbalom and by the 19th century had adopted rhythm and lead guitars. Romani orchestras became increasingly popular across Europe in the second half of the 19th century and were particularly sought-after from the 1920s through about 1960.

Jean Reinhardt, whose nickname “Django” is Romani for “I awake,” was born in Liberchies, Pont-à-Celles, Belgium into a family of Manouche musicians. (Manouche here is used to mean “French-speaking Roma.” Harrap’s French-English Dictionary defines “Manouche” as “traveler.” My all-French Larousse defines it as “Roma.”) He was first taught to play violin and then became enthralled with a once-popular hybrid called the banjo-guitar. By age 13, Django had mastered the banjo-guitar to the point that he could earn a living playing in bars and cafés after the family caravan moved to the outskirts of Paris.

Reinhardt did not make the guitar his principal instrument until after the catastrophic accident that threatened to end his musical career. At age 18 he was badly burned in a fire that consumed the caravan he shared with his first wife. As well as burning over half his body, the accident mangled the third and fourth fingers of his left hand, severely limiting his ability to use them at all.

Some two years later, after a remarkable recovery, the young musician was not only playing guitar but also beginning to absorb the sounds of American jazz from records in a friend’s collection. In the early 1930s, he became friends with Stéphane Grappelli, a Parisian violinist who embraced jazz with equal fervor. By 1934, Reinhardt and Grappelli had formed the Quintette du Hot Club de France as lead musicians backed up by two rhythm guitarists and a bass player.

The Hot Club ushered in an entirely new kind of music for Parisians. Even the rhythm guitars sounded      different, using a distinct percussive technique known as “la pompe” to replace drums. Much of the repertoire was in a minor key, but this “Gypsy jazz” had a minor feel to it even when it was playing in a major key. It often used major seventh and major sixth chords rather than standard major chords and substituted a minor sixth court for dominant seventh. Melodies came from Musette waltz music that was prevalent in France in the early decades of the 20th century, jazz standards that found their way from 42nd Street to the streets of Paris, and Django’s original compositions. Often the up-tempo performance style of the musicians contrasted the dark, modal sound of the melodies.

Django’s injury did not hold him back from embellishing melodies with passionate tremolo, string bends, staccato, and glissando not to mention dizzying arpeggios This ‘hot’ jazz guitar technique, known as Manouche in France, became a cherished tradition within the Roma musical community and a gift to jazz lovers worldwide.

The Second World War split up the original Quintette (Django spent the war in France while Grappelli stayed in England) although it was later reestablished without Grappelli. In post-war ensembles, Django often included horns, with the clarinet taking the lead role that the violin had held previously. He continued exploring creative frontiers and was an enthused by the be-bop innovations of Dizzy Gillespie and Charlie Parker. In 1946, Django toured the United States as a guest soloist with Duke Ellington and his orchestra. Before returning to France, he played two nights at Carnegie Hall to great ovations. By now, his numerous recordings were gaining wider distribution.

In 1949, the celebrated guitarist collaborated with Stéphane Grappelli in Rome for what was to be his final recording, the double album, Djangology.

Since Django’s death in 1953, family members –his sons Babik and Lousson, his brother Joseph, and his grandson David Reinhardt–have had notable careers as guitarists. A new generation of “Gypsy swing” proponents has emerged with such prodigious talents as Biréli Lagrène and Angelo Debarre. Non-Roma “gypsy-style” guitarists have also followed in Django’s footsteps, among them John Jorgeson and Stéphane Wrembel. In the Footsteps of Django showcases some of the latest beneficiaries of the Django legacy.

But listen to recordings of Django compositions such as Minor Swing, Daphne, or Nuages. Watch a film fragment of Django playing on YouTube. How is it possible to approach the magic of those fantastic fingers?

In 1985, the Grateful Dead’s Jerry Garcia declared in Frets Magazine: “Even today, nobody has really come into the state that he was playing at. As good as players are, they haven’t gotten to where he is. There’s a lot of guys that play fast and a lot of guys that play clean, and the guitar has come a long way as far as speed and clarity go, but nobody plays with the whole fullness of expression that Django has. I mean, the combination of incredible speed–all the speed you could possibly want–but also the theme of every note (having) a specific personality. You don’t hear it. I really haven’t heard it anywhere but with Django.”

More information and tickets for the October 6 performance of In the Footsteps of Django are available through Kalakoa Entertainment.

For more on Django Reinhart and a lot of videos check out this site.

Audrey Coleman is a journalist, educator, and passionate explorer of traditional and world music. She is a graduate student in ethnomusicology at the University of California, Riverside.