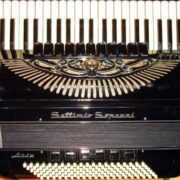 Watch What You Wish For: 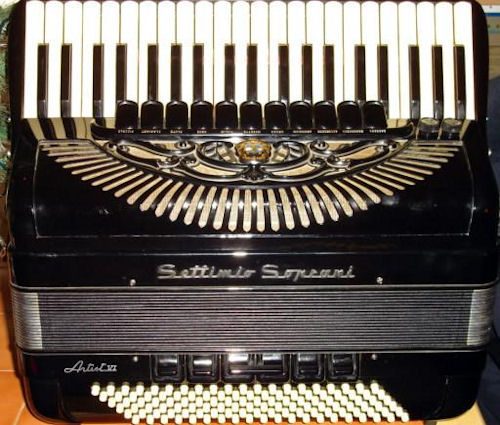 It is the old joke about the guy who leaves his car unlocked, and forgets that he has left an accordion (or a banjo or a set of bagpipes) on the back seat, and rushes back to find two of the instruments waiting for him.

We live in Aberfeldy, right in the geographical heart of Scotland, and in the last week we have become the custodians of approximately fifty accordions, part of a collection of over three hundred owned by a lady who lives north of here in Invernesshire.

In the last week I have been building shelving in the Town Hall for these instruments, and we are supposedly going to obtain fifty more in due course. To say that this has rather come as a bolt from the blue, would be an understatement. A couple of weeks ago I wouldn’t have known a Settino Soprani 55 from a Quagliardi, and in truth I still don’t, but I am on a fast track learning curve. Originally most of the collection was going to be split up, with some going to a museum in Edinburgh, Scotland’s capital, while others are to be retained up north. Our local Perth and Kinross Council has expressed an interest in establishing an Aberfeldy Museum, and these would be an invaluable part of it, as I may be if I live that long.

In other news, we are getting ready for Perthshire Amber, Dougie Maclean’s iconic Festival (Pershire Amber Dougie MacLean Festival) which takes place in late October/early November (www.perthshireamber.com) with its usual array of concerts, one of which will be in our venerable Town Hall, Dougie lives in Butterstone, just outside of Dunkeld, and the other venues include Castle Menzies a fifthteenth century castle near the village of Dull, about two miles from Aberfeldy, which has recently formed a relationship with the town of Boring in Oregon. There is also a concert at the Scottish Crannog on Loch Tay (The Crannog is a re-creation of a bronze age round house, located on stilts above the loch, and information about it is available on www.crannog.co.uk) These and the other venues do a great job in making this a very welcome and critical part of Perthshire’s musical heritage and culture.

Watch What You Wish For: