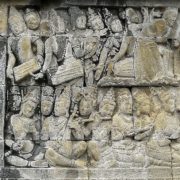 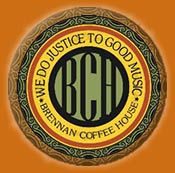 Folk Justice. It’s evening in the Justice William Brennan Courthouse in Jersey City. The judges, juries and lawyers have all gone home- or to the nearest bar, and the lights are out in the upper floor windows. In the rotunda, though, it’s a different story. Volunteers are busy setting up tables and chairs, organizing water, wine and coffee, and setting out brownies and cheesecake. As the first guests enter through the metal detectors at the door and purchase their tickets, a volunteer greets them- “Welcome to Brennan Coffee House!”

Yep, you read that correctly – it’s a coffee house in the rotunda of the courthouse in Jersey City. Brennan’s is the brainchild of Hudson County Executive Thomas DeGise, a self-described “old folkie.” He got the idea while listening to a gospel singer at his own inauguration and enjoying the sound of acoustic music swirling around the dome of the rotunda.

DeGise says that in the beginning, folk artists were not exactly excited about playing gigs in a courthouse. The thought of an audience entering the arena through metal detectors with armed guards was one problem, and then there were the acoustics. But over time the venue has become popular with both audiences and performers, and has hosted familiar names like Tom Paxton, Tom Rush, and Lucy Kaplansky.

Brennan Coffee House is open one Friday each month, and holds 120 people. It’s almost always a sellout crowd, with tickets available only at the door, but you can reserve in advance by phone.

Some days there won’t be a song in your heart. Sing anyway. ~Emory Austin

Sing out loud in the car even, or especially, if it embarrasses your children. ~Marilyn Penland

As long as we live, there is never enough singing. ~Martin Luther

In classical Vietnamese music-theatre (Tuong), a drum was placed in front of the stage, which audience members played in order to criticize the performers. The number of beats played and the pitch of the drumbeats indicated whether the audience felt the play was good or bad, or if perhaps they wished to discuss the performance with the manager. One beat on the drum, for instance, told the performers to wind up whatever they were singing and get on to the next part! (From Pham Duy, Musics of Vietnam, Southern Illinois University, Carbondale, 1975.)

A guy calls the musicians’ union to get a quote on a six piece band for a wedding. The rep says “Off the top of my head, about two thousand quid”. He says “WHAT? FOR MUSIC?. “The rep responds “I’ll tell you what. Call the plumbers’ union & ask for six plumbers to work from 6 to 12 o’clock on a Saturday night. Whatever they charge you…, we’ll work for half.” “I get your point” he says. …. Pass it on.

The largest musical instrument in the world is the organ in the Municipal Auditorium, in Atlantic City. Designed by U.S. Senator Emerson L. Richards and completed in 1930, the organ has 33,112 pipes ranging in length from 6 millimetres to 19.4 metres.

Jean-Baptiste Lully (1632–1687), the first documented conductor, was the first musician to use a baton. It was a heavy, six-foot-long staff that he pounded on the ground in time to the music. One day, at a concert to celebrate the king’s return to health, he accidently stuck the staff into his foot. He developed gangrene and died. 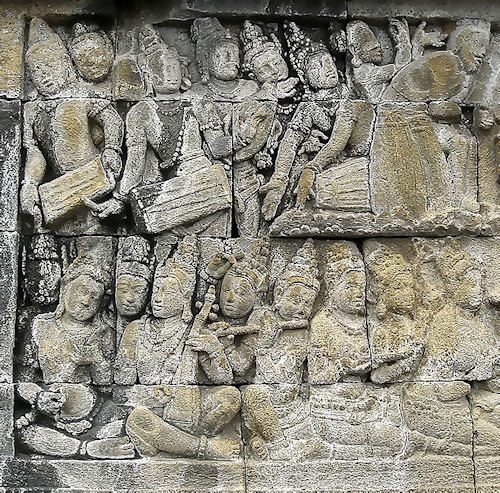 gam·e·lan /ˈgæməˌlæn, -lən/ [gam-uh-lan, -luhn] – a musical ensemble from Indonesia, typically from the islands of Bali or Java, featuring a variety of instruments such as metallophones, xylophones, drums and gongs; bamboo flutes, bowed and plucked strings. Vocalists may also be included.

The word gamelan comes from the Javanese word gamels, meaning “to strike or hammer”, and the suffix an, which makes the root a collective noun.

Gamelan music is rhythmic and mesmerizing. Click here to see and hear what it sounds like. There are a number of gamelan orchestras in Southern California, including UC Riverside, UCLA, and CalArts in Valencia. Check their web sites for information about concerts.

You’ve probably heard the story… how Arlo Guthrie was in a bar when a guy came up and asked him to listen to a song he’d written. Arlo said he’d listen if the guy bought him a beer, and he’d only listen until he’d finished the beer. The song was City of New Orleans. Arlo kept listening after the beer was gone.

That guy’s name was Steve Goodman, and “City” was not the only song he wrote. He was a prolific songwriter, a denizen of the famed Old Town School of Folk Music in Chicago, and a diehard Cubs fan. Sadly, he died in 1984 at the age of 36, of leukemia.

A few years ago, author Clay Eals produced a biography entitled Steve Goodman; Facing the Music. It’s a brilliant read, available from Amazon and major booksellers, and worth adding to your summer reading list.

OK. I was going to end this column with a clever limerick about music or dance, but I’ve scoured the web and couldn’t find one that wasn’t absolutely rubbish. If you’ve got a decent one, send it to me and I’ll include it in the next column.