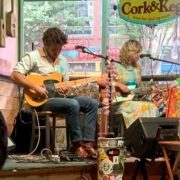 When I started this column a few months ago, I decided to focus on the finding of resilience and meaning through music. I had just spent the hardest few years of my life finding hope and strength in the music and musicians that I love so dearly, and this theme was exceptionally present in my daily life. Although I knew that it would probably stay that way, there have been several musical moments since then that gave me no choice but to reflect more deeply on just how magical this phenomenon is. Luckily, I happened to write some thoughts on these occasions that I’d like to share here. 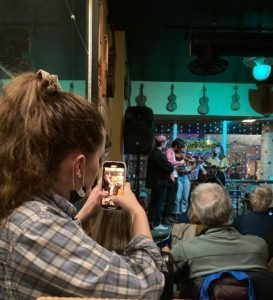 The author (Lindsey Terrell) documents The Onlies performing at the Cork and Keg in Asheville, NC

May 29th, 2022 was the two-year anniversary of the release of Jake Blount’s critically acclaimed record Spider Tales. To borrow words from Jake’s regular bassist Nelson Williams, “this album changed my life.” It was the first vinyl I ever bought new. It was the first of many purchases from, and the way I fell in love with, Free Dirt Records. It encouraged me to think more deeply about the roots of old time music, and then conversely, about the future of old time music and what it can be. It was probably the first album around which I manifested my passionate internet music marketing persona. The smooth shuffling sounds of Nic Gareiss’ sweet feet, other perfectly chosen guest artists, gorgeous album art, and beautiful and poignant liner notes prove this record a masterpiece and Jake a force of nature.

Tuba Skinny’s performance at the Grey Eagle in Asheville, North Carolina was absolutely sensational. I am glad I finally caught them live. They ended with a Snooks Eaglin number, which was a special treat because he’s been in my regular rotation lately. I also finally (and unexpectedly!) got to meet the incredible visual artist Sasha Pearl, who was selling merchandise for the ensemble. I’ve been following her work ever since I purchased New Orleans-based bard Chris Acker’s 2021 record Odd, Ordinary, and Otherwise, for which she designed the album art. This entire evening was long-awaited and did not disappoint. 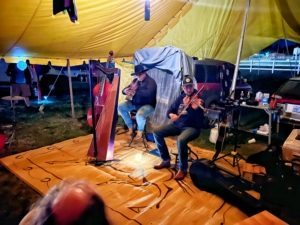 In early June 2022, I attended the Mt. Airy [North Carolina] Bluegrass and Old Time Fiddlers Convention for the second time. There are many memorable moments to recall, but Larry Bellorín and Joe Troop’s pop-up concert in the infamous giant yellow “Cajun tent” on Saturday night was a spiritual experience for the ages. In a matter of just a couple of hours and solely by word of mouth, a huge crowd showed up to partake in the joy, Spirit, and crackling sonic waves offered by these musical twin flames and their amazing, multi-talented guests.

Things have been a little rough lately. I’ve been struggling with energy and motivation, feeling some lack of direction and hope, but whenever I’ve felt like this in my life, The Beatles have always been there to light the way and sit with me in the darkness until I can see that light again. I fell in love with their music in 7th grade the moment I heard “Hey Jude” performed by the 9th-grade band at East McDowell Junior High School, and my life hasn’t been the same since. The logistics of the Paul McCartney concert in Winston-Salem, North Carolina were not pleasant. The traffic, the parking, the mass of people. . .I’ve never seen anything like it at any similar event. I undertook this adventure wholly by myself, which is a big deal given that navigating something like this gives me anxiety even with the best of company. However, it was a pleasure to see Sir Paul for the third time in my life, just a few weeks shy of his 80th birthday. His stamina and easy charisma during a three-hour show is the greatest argument for vegetarianism I have ever seen. Perhaps the most special moment of the night was his duet on “I’ve Got a Feeling” with John’s isolated audio and video material from the legendary Rooftop Concert. 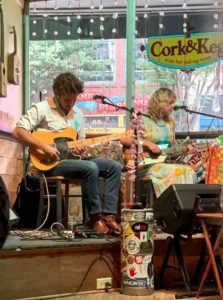 Daniel Coolik and Kelli Jones at the Cork and Keg in Asheville, NC

Just a few short weeks after that singular experience, I got to witness Kelli Jones and Daniel Coolik perform a soulful, jazzy, bluesy rendition of John Lennon’s “Mind Games” at the Cork and Keg in Asheville. Hearing one of my favorite solo John songs done with Daniel’s heartrending guitar playing and Kelli’s unmatchable eerie croon was exceedingly special and I’m grateful to this impeccable Louisiana-based duo for a perfect night.

I wish I could write an entire book about each musical performance I take in. There is so much to say about each one – about every musician, every song, every lyric, every note. Unfortunately, I do not have the earthly time and vocabulary to give each moment its due. Instead, they wash over me like ocean waves, each one a lesson in gratitude and joy, and that is enough. My advice to you is this: treasure the musicians you love, human though they may be. Let them help you see and hold onto what is good in yourself, in others, and in the world around you. This is real magic, and it is timeless.