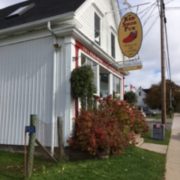 Fiddlers from Cape Breton – Part I 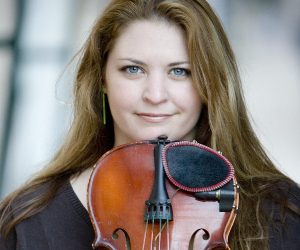 As I drove my rented Ford Fusion south on Cape Breton Island’s Route 19, the name of the folk festival I had attended, Celtic Colours, took on glorious meaning. Maple and oak trees on both sides of the highway were busting out yellow, orange, and red. They were as vibrant as the music I had experienced for five days. As fragile too: The fiddling tradition that had all but vanished some 60 years ago has made a spectacular comeback since the seventies.

You aren’t familiar with this island? Cape Breton is part of Canada’s eastern province of Nova Scotia on the Atlantic Coast, occupying 3,981 square miles. In the 1600s, French settlers emigrated and established a thriving community. They came to be known as Acadians. The mid-18th century spelled catastrophe for them. The British, following victory in an Anglo-French war, deported approximately 10,000 Acadians between 1755 and 1758. They were sent principally to the southern colonies where survivors became the Cajuns who eventually developed their own musical style. Several hundred Acadians escaped exile; their descendants are French-speaking residents of a few Cape Breton towns such as Cheticamp on the west coast. British loyalist settlers partially filled the population void left by the exiled Acadians. But the character of the colony shifted dramatically in the 1800s when some 50,000 Gaelic-speaking immigrants from Scotland, fleeing famine, settled on the island. Its character is now decidedly Scottish. In fact, because of its isolation, musicians from Scotland now consider Cape Breton fiddling more representative of centuries-old musical traditions than styles currently played by Scots.

Being Canadian-born, I was always vaguely curious about Cape Breton, but was more attracted to Québecois folk music, which has its own fiddling tradition. Only in the early 90s when I attended a concert by the extraordinary Natalie McMaster, a Cape Breton fiddler who step-dances while playing, her curly blonde locks flying in the air, did I get an inkling of the rich Celtic culture on the island of her birth. Whenever her tour included L.A., I was in the audience. In 2008 she performed at the Festival of New France I attended in Quebec City (go figure!). Each time I became more intrigued by her stories of her uncle, famed fiddler Buddy McMaster, and fiddling families like the MacDonalds, the Beatons, and the MacIsaacs.

My connection to Cape Breton fiddling took on urgency last spring after a concert in Pasadena by Cape Breton fiddler Andrea Beaton and an accompanying bagpiper. She whipped up a fiddling frenzy with powerful bowing and a driving, rhythmic style. Her descriptions of the Gaelic tradition of ceilidhs (pronounced kay-lees) – three or four hours of music-making in people’s homes and of late-night jamming at the Red Shoe Pub in her hometown of Mabou (a name of probable indigenous origins) enthralled me. I interviewed her for a future Folk Beat column.

Andrea Beaton comes from a line of fiddlers stretching back to Scotland some 200 years. She grew up surrounded by fiddle music, being the daughter of master fiddler Kinnon Beaton, niece of legendary fiddler Buddy McMaster, and first cousin of Natalie McMaster. She didn’t embrace the fiddle until her late teens, but when she did, her natural musicality emerged. She calls herself a late bloomer since most remarkable Cape Breton fiddlers acquire their technique in childhood. 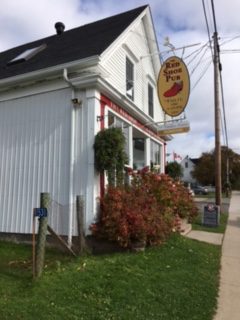 The Red Shoe in the little coastal town of Mabou, Cape Breton Island, is a pub where local fiddlers gather and jam for hours into the night.

The success of her cousin Natalie was a major influence. ‘She’s a few years older than me,” said Andrea, “so growing up I would see her and other people and my parents and Uncle Buddy and all these people playing in concerts… before I was ever even playing fiddle. So that was the beginning of her influence – seeing somebody young playing the music was really fun…. Then she started making a name for herself, of course. It’s exciting when someone you know is getting kind of famous. And I always loved her music…. I have two musical sides to my family. There was Natalie and my Uncle Buddy….”

She calls that side “the Judique side,” after the little town that was home base for the MacMasters, including her Mom, piano accompanist Betty Lou Beaton, sister to Buddy McMaster. The other side she calls “the Mabou side,” hometown of her father Kinnon Beaton, and site of the Red Shoe Pub, the fiddling gathering spot.

It was from Andrea that I learned about the Island fiddlers’ practice of stringing together different genres of tunes composed primarily for dances into a medley. “When we put a medley of tunes together, we start slower and build our way up,” she told me. “[For instance,] we start with a march, then go into a …strathspey, and then a reel. But the reels that we play are steady, because they have to [support] the dancing… We usually step-dance first a strathspey and then a reel.”

Andrea Beaton’s performance and our interview made the fiddle music of Cape Breton Island come alive for me. Perhaps the stars would align to bring me to Cape Breton to finish the article.

Voilà! Shortly after the Pasadena concert, I learned that the International Council on Traditional Music was holding a symposium at Cape Breton University. It was to include several concerts and workshops of the Celtic Colors Festival in its program. Andrea Beaton had mentioned the nine-day island-wide, multi-venue celebration of music, dance, food, crafts, but above all fiddle music. By summer, I had registered for the symposium, applied for a press pass for Celtic Colours, and arranged transportation to include stop-offs in Toronto and Montreal to visit family and friends. Between October 4th and 19th I took five plane rides (Oy. Don’t ask…) It was worth it.

There is too much to share about Cape Breton fiddling for this already-lengthy article. Stay tuned for Part II: Challenging the Vanishing Cape Breton Fiddler Film.

Audrey Coleman is an ethnomusicologist and journalist who explores musical traditions in Southern California and beyond.

FIDDLERS FROM CAPE BRETON – PART I