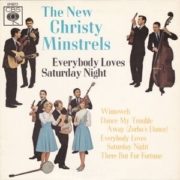 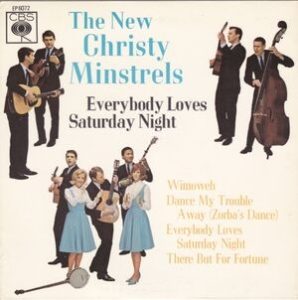 About a month ago, I received an email from a clergyman thanking me for having written a song that was featured in one of his services. The song was Everybody Loves Saturday Night.  Naturally, I was flattered but… I’ll explain. The letter was on behalf of an entire congregation that was thanking me for writing a song that I had first heard and learned as a college student way back in the late 1950’s.  They had scheduled the song for performance at a Synagogue service and when they researched who wrote the song, my name came up.

I felt compelled to thank them and then to explain for the umpteenth time (this has happened before, multiple times) – that I did not write the song, but the credit was legitimate. Confused yet? OK. Here’s the story.

I was fresh out of high school and in my first year at Columbia when I first heard the song at a late-night concert at the Bhai Temple in lower Manhattan and it was Pete Seeger with his long neck banjo who mesmerized the crowd when he introduced ‘Everybody Loves Saturday Night’, to our Greenwich Village world of eager young folkies. The song had emerged from Nigeria in the 1940’s as a protest song against restrictions placed on the Bantu population on public gatherings on Saturday nights. Pete, in his way, expanded the song to a universal anthem by composing lyrics for the song in many languages, French, Italian, Spanish, etc., adding to the original Bantu “Bopo waro  ferro Satodeh”.

Frank Hamilton, founder of The Old Town School of Folk Music in Chicago and longtime friend of Pete Seeger, comments: “I know for sure that Pete added the other languages because I was with him when he called a Chinese restaurant to get the Chinese translation.” You cannot get better testimony than that.

When I first heard the song at that large concert, it electrified the audience – English, French, Spanish, Chinese, every language imaginable and in Pete’s signature way of getting everyone within earshot fired up, we all joined in on the chorus over and over as Pete took turns with each language he had added. Over and over as the energy in the hall rose to fever pitch, Pete swinging his long banjo neck like a conductor’s baton. Pete had a way of evoking passion from any audience. Those who were there remember.

It was only natural that all the folk music groups picked the song up and continued to sing it and it immediately became standard repertoire for every folksinger within traveling distance of Washington Square. The Weavers were most likely the first and Tarriers soon followed. Others followed, but more than that. The song made the rounds at Washington Square in Greenwich Village and could be heard simultaneously on just about any Sunday afternoon hoot day from the ensembles that gathered in the dry concrete fountain in the Square.

So, we come to the core question of this article. How the heck did I end up with writing credit? I guess fate acts in mysterious ways, true to the saying.  The answer lies in one of the aberrations of the music ‘biz’. Apparently, no one was able to ascertain the original composer of the song since it arose spontaneously from a protest movement on a continent thousands of miles away, and so it was written off as what is known in music biz terminology as a Public Domain song. This means that the song belongs to everyone and no one at the same time and whomever claims a fresh version gets the credit. “Don’t ask!” as my mother used to say. Copyright law is confusing to say the least.  When the New Christy Minstrels decided to record the song somewhere in the early sixties, our record label, Columbia Records had to assign our version of the song to someone. After all, Columbia’s Publishing company could not condone song royalties floating out of their reach due to some technical aberration. No siree. So, the song was lassoed and brought under the aegis of their publishing arm. All that was left now, was to name someone to collect the writer’s share since an arrangement of a Public Song is traditionally credited to the arranger. From there it was a matter of writing down the name of the group member who remembered the song and had created the current version. So, in the spirit of cooperation, I contributed what I had heard so many times since the memory of Pete’s performance never left me. One by one, I wrote down the verses of the song that I had heard years before at that B’hai Temple in lower Manhattan. Little did I know that I had suddenly become the composer. If you ask me, that’s one shade between a miracle and a heist. Pete, forgive me wherever you are.

I learned about my good fortune such as it was long after I left the group and my royalties came directly to me along with detailed statement. To be truthful, I needed the money so I cashed the checks after my attorney informed me that it was not only legal but proper.

Where in this article do I get to mention that the oddness of this financial arrangement still amazes me. Somewhere in Nigeria, a family’s great uncle or brother, or father, walks the ground having written one of the finest songs of protest ever composed. Apparently there were many versions and many “arrangers” since each version recorded had it’s owner. I hope we shed some light on the plight of those poor folks who tried to make the best of a Saturday night lockdown in their own country.

So there you have it. I’ve been rewarded financially for remembering a song. Funny, I remember lots of songs but nothing more yet. Meanwhile, I still love Saturday night.

I searched for a recording of Pete that comes close to the version I first heard, but no luck. If anyone can find one, I’d appreciate letting me know…it’s electric…thanks.

Here’s my version as sung by The New Christy Minstrels:

And The Serendipity Singers:

To be fair, a YouTube search will uncover some pretty interesting versions, so have at it…

(Except the guy who really wrote it)