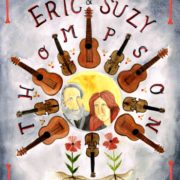 Echoes from the Tiki Parlour: The Eric & Suzy Thompson Release 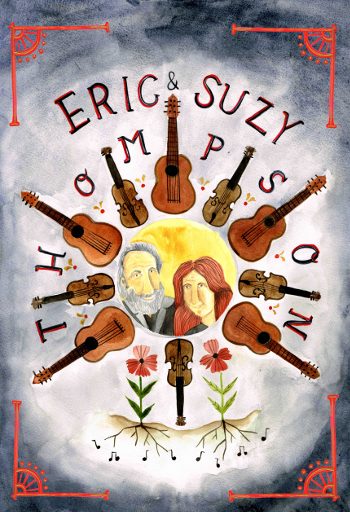 Old-time music is a wonderful thing. It’s a musical genre with many faces. One of my earliest exposures to this behemoth of a genre was through the Harry Smith Anthology. Soon after, the Doc Watson Family recordings rolled into my life and then a ton of Lomax recordings hooked themselves into my ears and heart. Southern fiddle tunes, banjo songs, fingerpicked country blues guitar, early Cajun fiddle and accordion, heart wrenching ballads, blues mandolin, jug band wonders and shredding flatpicked guitar were all part of this huge chapter in American old-time music. To think, I only had a handful of these recorded documents at that time. What else was there to seek out and discover? I’ve spent over a decade obsessing on this music, studying and, now, teaching it. However, I’m always learning…so much music and so little time.

So last year, I was given a golden opportunity when Eric & Suzy Thompson accepted my invitation for a special visit. These two masters road tripped their way down to the Parlour, packed to the gills with lovely, well-worn instruments. Why? So I could capture some of their wild musical prowess and repertoire for a DVD release.

When I started playing old-time, I was astonished by the variety of sounds, voices, instrumentations, stories, histories, rhythms and personal/regional styles within this old-time musical umbrella. Coming at it from the modern age, I was a bit surprised at how much of it suffered from a lack of visual documentation. First and foremost, I’m into sound. Let that be very clear. However, as a learner of the music, I wanted to see how these players played. I wanted to soak up the body language, the bowing trajectories, the hand formations, the rolling back of musically-tranced eyeballs, the physical efforts, the contented smiles and the quivering lips of these masters. These details help unlock many mysteries of the musician.

I don’t know where I’d be if I didn’t experience this first-hand visual dimension of music from watching my mentors Tom Sauber, Mel Durham and Dan Gellert up close OR the secondary experiences from the scattered clips of Dennis McGee, Howard Armstrong, Tommy Jarrell, Son House, Sam McGee and several others. It got me thinking about all the musicians that could have been documented but weren’t. The musician in me had been nagging the inner filmmaker for years, to do something for today’s current masters of old-time. So I began Tiki Parlour Recordings, as many of you probably know by now, to capture a ton of footage and music from the old-time funk titan Dan Gellert. So after releasing the Rafe & Clelia Stefanini DVD and the epic Dan Gellert set, I was a man with a musical mission: Document the best of the best traditional musicians for future generations.

They arrived at my home in March of 2014. We got to know each other and recorded for several days. The flashbacks hit me immediately once the “tape” started rolling. The sounds and memories of when I discovered old-time music rushed back with an indescribable intensity. The wonder and variety of the Harry Smith Anthology was happening right before my camera lenses and microphones. I’ve never seen or heard anything like this in person before. Fiddle tunes from Kentucky and West Virginia, Cajun fiddle blues, rags, Texas stringband sounds, Cajun accordion songs, Mississippi Sheiks fiddle and fingerpicked guitar, hypnotic blues numbers with Yank Rachel-esque mandolin, flatpicked guitar/fiddle duets, abundant creativity and a voice from heaven were all projecting out of just two people. The rich tapestry of sound and rhythm that hypnotized me early on, was happening in front of me and I could actually see it! I feel so inspired, invigorated and excited to be part of this musical history-making and now, my dear readers, you have a chance to see and hear the Thompsons just like I did!

Without further ado, I present a serious labor of love: The Eric & Suzy Thompson DVD. Watch, listen, learn and enjoy!

Order it from the Old Time Tiki Parlour website.

David Bragger is a LosAngeles-based instructor and player of old time fiddle and banjo music. He also photographs, films, and collects the lore of traditional artists, from puppeteers in Myanmar to fiddlers of AppalachiaThe Old Time Tiki Parlour

ECHOES FROM THE TIKI PARLOUR: THE ERIC & SUZY THOMPSON RELEASE