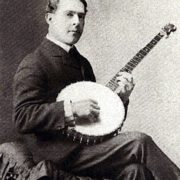 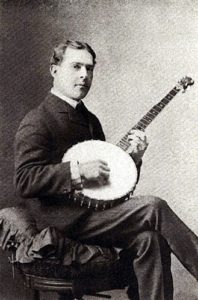 More Banjo!, a radio show hosted by Heather Rose on KCSB, covers any music with banjo content. It started in October and its 6-8am Thursdays schedule isn’t conducive to a wider audience at, but I was preparing my class then. The advantage of being up early was that I heard a range of music that I may not have encountered otherwise. “More Banjo!” is also archived on Mixcloud.

In the fall, I researched the role of mandolin in US traditional/rural music, “old-time” for lack of a better term, and my last two columns describe what I found. Now on to banjo. Let’s say “old-time” is intended to refer to late 1800s and early 1900s music played in rural America (so at least one and maybe two generations before bluegrass), but I believe that our current association is a more modern definition (mainly shaped by the 1960s folk revival and groups like the New Lost City Ramblers). It is hard to know how “old-time” sounded because the first recordings by rural artists were not made until the mid-1920s, that’s when “electrical” recording (which meant microphones) became available and labels went on field trips. 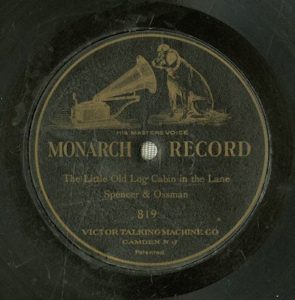 There were many banjo recordings before 1920, as well as recordings with a hillbilly/country theme. But those were made by professional studio musicians in New York of Philadelphia, doing some enactment. Banjo is a very American instruments, among the highest numbers of recordings by a single instrument before 1920 and starting already before 1900. The first “old-time” recording for which I could find a sound file was recorded October 25, 1902, The Little Log Cabin.

The banjoist (Vess Ossman) was one of the most recorded artists of his time, more than 500(!) recordings, starting in 1896, many before 1910 when any recording was a very unusual event. To put that into perspective: Enrico Caruso, a name that nowadays is still recognized even among people who don’t care about opera, made 300 recordings in the US. Ossman played fingerstyle like a classical guitarist and used gut strings. What surprised me: The similarity between Ossman’s banjo technique around the turn of the century and bluegrass 40 years later. Ossman plays rolls that Earl Scruggs, with metal fingerpicks and steel strings, turned into the signature sound of bluegrass. Maybe bluegrass banjo was less an evolution (or revolution) of trad banjo traditions than a rediscovery of classical/”educated” banjo technique that students may have learned at a conservatory in 1900. They never met: Ossman died a year before Earl Scruggs was born.

While the banjo nowadays has a connotation with “primitive,” “rural,” that certainly wasn’t the case 100 years ago. There were classical banjo orchestras, banjo was a solo instrument. Gibson banjos cost $125-200 in 1930 (when annual teacher salaries were $400-600 per year). So in the 1920s, most people would expect a banjo performance to be more like this:

The Ingenues, featured in this recording, were quite the Roaring Twenties band! It looks so easy and effortless and fun – none of the groaning and face distortion of so many classical and jazz musicians – and yet what they are doing is very challenging. I guess it is a bit of a circus act, Vaudeville, but having to do the acting while playing very difficult material only makes it more impressive. It gets even more amazing when watching their other videos, they constantly switch between instruments. No time for any adjustment or warm up, straight into a solo or challenging line on something completely different, banjo, accordion, trombone, fiddle, piano…and all really tight, no rhythm wobbles or out of sync. 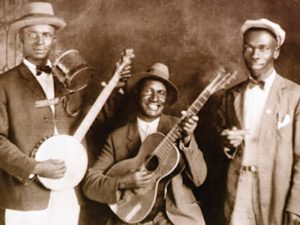 In the first wave of commercially published field recordings, there were numerous string bands (which could be any combination of banjo, fiddle, mandolin, guitar) and many of them were black musicians. Tunes have rag, stomp, blues in their title; the structure may be one part only (like a blues) or multi-parts (sometimes changing keys) rather than the common 2-part structure of Irish/Scottish fiddle tunes. My last two columns described the mandolin recordings of that era and the string band and jug band style is largely forgotten now.

Gus Cannon was a black banjo player in the first wave of rural players. He lived well into his ‘90s and therefore long enough to be rediscovered during the 1960s folk revival. The Pig Ankle Rag (first recorded by Gus Cannon’s Jug Stompers in 1928 as Pig Ankle Strut) is one of the tunes that is still played, I have it in my repertoire and play it with my daughter:

While Gus Cannon’s band is the first (old-timey) recording of this tune that I know and Noah Lewis (who plays the melody on harmonica on the Jug Stompers recording) is listed as composer, the melody appeared much earlier, in a 1905 piano composition called Pig Ankles (subtitled “A Grotesque Intermezzo”). That composition may itself have borrowed a trad theme rather than being the original source, though. It has a lot of other plinky stuff, but no additional musical ideas (the composition is as atrocious as its subtitle suggests). The second strain of Pig Ankles Rag is a standard lick that reappears in other tunes, including Beaumont Rag. A memorable first part and a standard second part makes Pig Ankles Rag an easy tune to learn.

EARLY BANJO RECORDINGS – IS IT “OLD-TIME”?