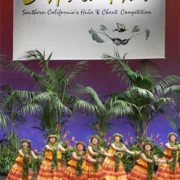 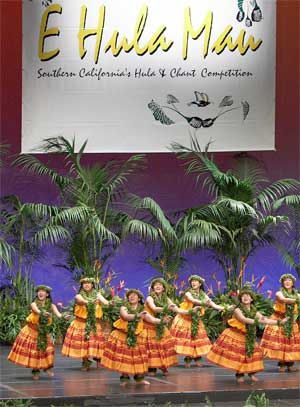 Countdown to Labor Day Weekend, the watershed between summer’s holiday mood and September’s “back to business” tone. For Michael and me, that weekend means hula immersion. For the past seven years, we have spent that Friday through Sunday of LDW at the Long Beach Convention Center watching the 17th Annual E Hula Mau Hula and Chant Competition. The Hawaiian words mean “the hula lives” and while celebrating excellence in that dance form is at the root of this event, E Hula Mau is actually as much a cultural festival as a competition. During breaks between the competition segments in the Terrace Theater, we browse the displays of vendors stationed in the lobby and outside on the Convention Center mall. I’ve taken workshops in lei-making and the art of the Hawaiian nose flute. Delicacies such as lomi-lomi salmon and spam musubi tickle the palate and satisfy the tummy.

This year fourteen Southern California hula halau (schools) and one halau from Las Vegas will compete in categories by age group of the dancers, gender, and dance style. Judges confer at the end of each day and hand out awards to the applause and shrieks of delight from hula students, friends, family, and fans. Friday afternoon is devoted to performances by solo dancers and chanters from each halau. Saturday features group kahiko (ancient hula accompanied only by gourd drums and chanting) while Sunday showcases hula auana with groups dancing to modern instrumental and sung accompaniment. The kahiko hula can be thrilling to watch with its low stances and athletic reaches and turns. Auana hula movements flow like ripples on water as dancers interpret natural landscapes of Hawai’i and poems of love. With the variations in music, costumes, and the different compositions of the competing groups, it is impossible to be bored at E Hula Mau.

Enthralling as the performances are, three days would not fly by half as fast without MC Frank Kawaikapuokalani Hewett to introduce the performers and move the show along. The renowned kumu hula (master teacher) and prolific songwriter steers E Hula Mau through its complex program of events with his strong presence and a good dose of humor. “The pace of the whole competition is very comfortable to me as an MC…I enjoy watching the performances. I enjoy the opportunity to be part of the Festival…I was here for the very first one, and of the 16 years, I have been here for 15 – as a judge, as a head judge, and now the MC. When I first came here, it was an opportunity to help the kumu hula here in Southern California…to establish a stronger foundation in the hula tradition… Every year they get better.”

Even though Na Mamo, the organization that produces the event, generally keeps the theater and outdoor mall activities running like a well-oiled machine, the 58-year old kumu needs to tackle unforeseen delays. He has been known to rise from his MC table and take center stage, launching into a dance to keep the waiting audience entertained. “I always have to be one or two steps ahead of the program itself,” explains Hewett, “and so I’m always quickly thinking of things to do and things to say and where we need to move…Anything could happen backstage that could slow the program up a minute or two. And if that happens, (the stage manager) lets me know rather quickly, so I can say something a little bit more than what was planned. Sometimes (the kumu) has written one, two, or three sentences and I have to use what I know about the hula and about this particular mele (to fill the time). I draw on the costumes, the adornments, the instruments used, the song, and my historical knowledge.”

Awards at E Hula Mau include not only first, second, and third place in dance and chant categories but more global awards such as the one honoring the late kumu hula George Holokai, whose efforts established the competition’s reputation for rigor, and the award for excellence in Hawaiian language.

Carson-based Hula Halau O Lilinoe has competed in E Hula Mau more than 10 times and garnered numerous awards. Annette Ka’io, who shares kumu duties with her mother, Sissy Kai’o and brother Pele Ka’io, says the competition has helped the halau prepare for the world hula competition held in Hilo, Hawai’i each spring, the Merrie Monarch. “What Michael Crabbe and Na Malo have done for Southern California and mainland halau is raise the caliber of hula for all of us, so from where we started from the first E Hula Mau to today, we can see the growth.”

Another benefit of the Long Beach event is its location, according to Ka’io. “It brings out the dancers’ grandparents and cousins and aunts and uncles that can’t travel with us to Hawai’i (to the Merrie Monarch) but can go to this local competition.”

The most meaningful award that Halau O Lilinoe has won at E Hula Mau, in Ka’io’s view, is the language award, which they took four years in a row. Language and not dance? “Without language,” replies Ka’io, “there are no songs to be taught and no dances to be danced.”

If you are interested in watching the poetry in motion known as hula, tickets and more information about E Hula Mau — from September 2nd to 4th– are still available at www.ehulamau.org. You can purchase tickets for separate days or get the whole package including a Saturday night concert with top Hawaiian musicians, called the Mahalo Bash.