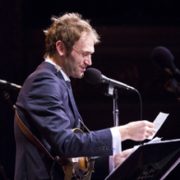 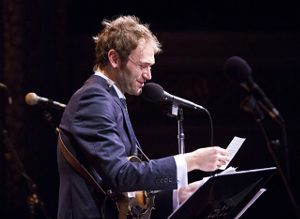 Can it be true? No more Lake Wobegon? No Powder Milk Biscuits? Apparently so, as it’s now been made official; Garrison Keillor will be leaving shortly to head (one presumes) over the fictional horizon and back to the town where all the women are strong, all the men are good-looking, and all the children are above average.

It’s hard to believe that those of us of a certain age have been listening in to the news from Lake Wobegon and the adventures of Guy Noir for 42 years. And even harder to realize that Keillor has been bringing us all of that and more for all of those years. No wonder he’s ready to settle back on the porch with a good book and a supply of Powder Milk biscuits to hand.

So now what. If you haven’t already heard, the new host of the show will be mandolin wizard Chris Thile, formerly and once again latterly of Nickel Creek fame. Thile’s first outing as host will be on October 15. It remains to be seen how he’ll do and how he’ll be received, but I have to think that it’s a positive move. He isn’t Garrison Keillor, or anything like him—and that’s exactly what’s needed. Keillor was and is a one-off host with unique gifts, and I have to think that any attempt to replace him with someone similar would be a poor imitation that would fall flat on its face. Thile, on the other hand, will be presenting a show with a much greater emphasis on music, which NPR hopes will appeal to a new audience without losing the old.

“He’s a brilliant musician,” Keillor said when asked about Thile. “He’s just an amazing musician. The show will have a solid musical foundation. We started out as a music show and then other things were added to it. And this new incarnation will evolve in the same way.”

As for Thile, here’s what he had to say in a recent interview with AP: “Garrison created a template that I think is immortal. It doesn’t feel like any kind of constraint. It’s like a license. I feel like I have my license to go and make some good radio. … The prospect of getting to make things for people on a weekly basis … is beyond compare. It’s what I love to do.”

Q: The uilleann pipes are the only instrument declared safe by the National Transportation and Safety Board (NTSB) Why?

A. They have seat belts and an air bag.

And speaking of music on NPR… [Editor’s note: Prairie Home Companion comes to you from American Public Media…] It’s been nine years since I left Los Angeles, but I believe it’s still true that there is no LA-area radio station that is carrying Fiona Ritchie’s landmark Celtic music program Thistle and Shamrock. That’s really sad, but at least you can now listen to the program online at www.thistleradio.com.

One of the unexpected perks of my relocation to Scotland was discovering that Fiona is now my almost-neighbour, as she lives in the next village over from ours. I’ve come to know her not only as a lovely person, but as a walking encyclopedia of information about traditional music on both sides of the Atlantic. So you can imagine my delight when I discovered she was co-writing a book about the migration of trad music from here to there and back again.

Wayfaring Strangers, The musical voyage from Scotland and Ulster to Appalachia, by Fiona Ritchie and Doug Orr, was published in late 2015 and is now available on both sides of the sea. It’s a beautifully crafted volume that’s factual, but it reads like a story with plenty of illustrations and examples and lots of personal insight from well-known trad performers. Not just a volume of songs and their provenance, Wayfaring Strangers looks at the whole picture; the songs, the tunes, the instruments, the people who shared them, and the social context that brought them to the new world- and sometimes back again.

banjo (băn-jō) def: a bodhran with delusions of grandeur

The musicians’ union here in the UK has started a fantastic program called Work Not Play. It’s a resource that’s available to professional musicians who are asked to play for no fee and are uncomfortable with how to respond. There’s great advice on their web site, and even a brochure that can be printed and given or shown to hiring venues. One of the best things about the program is a really excellent decision-tree for musicians to use in deciding whether to accept a request to play for free. Here’s a link to a free, printable PDF version of the chart: Should I Work For Free?

If you can imagine a man having a vasectomy without anesthetic to the sound of frantic sitar playing, you will have some idea of what popular Turkish music is like.