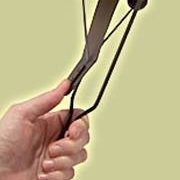 OR
WHO WAS THAT LADY I SAWED WITH YOU LAST NIGHT?

Music by the Carpenters? 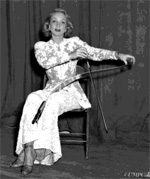 The Musical Saw occupies a niche these days as a novelty instrument. It is most often seen being played by street performers who use its unique sound to entice passer-bys to become patrons. Rarely might you see one on a stage or as part of a band. [ed. Noting exception to this point, both Vagabond Opera and Fishtank Ensemble played the Musical Saw at a recent performance at McCabe’s Guitar Shop.] But there was a time when it had captured the fascination of the public and was immensely popular. So what is it, how does it work and when was it so popular?

Even though you can now buy saws manufactured specifically to be musical, you can also use a regular carpenter’s saw purchased from your local hardware store. You might be happy with a standard 26-inch 8-point (8 serrations to the inch) saw. The length is important because it primarily determines the instrument’s range. A 26-inch saw will play in the tenor range.

There are two methods of eliciting music from the saw: you can strike it with a mallet (which was the original way to play it) or you can use the modern way which is to excite it with a cello bow. Whichever method is used, bending the blade into an S-shape gives you control of the pitch. To do this the saw handle is usually placed between the player’s legs while seated and then the tip is pulled upward with the fingers of the left hand while the thumb pushes downward to produce the S-curve as so nicely demonstrated by Marlene Dietrich in Figure 1. Ms. Dietrich played the Saw as part of her act while entertaining the troops during WWII. You can hear a bit of that in Audio Clip 1 (www.umpcollection.de/saege1.ram).

I should have node that 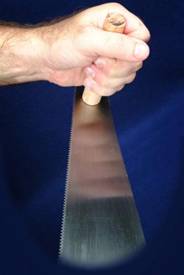 The S-shape divides the saw blade into three functional segments separated by nodes. Changing the shape of the S by bending harder or softer at the thumb moves the nodes and changes the length of the middle section which consequently changes the pitch. While the other two sections can be played, the middle section contains the sweet spot that gives the most pleasing sound. As the sweet spot moves, the bow is usually repositioned to follow it and the varying blade width at the point of contact also affects the pitch. A vibrato effect can be produced by bouncing a leg slightly which alternately raises and lowers the pitch.Video Clip 1 demonstrates both the bow reposition and the knee tremolo.

The biggest obstacle while learning to play may be the tension on the thumb which tends to make the practice sessions rather short. To avoid this problem people have attached secondary handles to the tip end of the saw as shown in Figure 2 and near the beginning of Video Clip 2. This eliminates the constant pressure on the thumb and provides more torque and, therefore, better control.

The first musical notes to emanate from a saw were undoubtedly accidental. Dropping the saw or waving it in the air might have produced the first note or a falling tool or perhaps a carpenter’s nail striking the blade may have done it. While the use of metal saws goes back at least 400 years there is evidence that it wasn’t until the 1700s that saw music came into existence and on several continents at once. But the saw needed a better quality of steel before it could produce tones of a truly musical timbre.

Clarence Mussehl was the one who finally came up with the type of steel needed to produce better resonance and vibrato. He also enhanced the tone and the range of the saw by using thinner steel and changing the width. In 1921, Mussehl & Westphal of Fort Atkinson, Wisconsin, became the first major U.S. marketer of musical saws. During the 1920s and early 1930s they sold over 30,000 units a year. 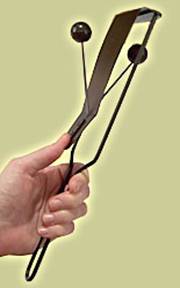 It was the vaudeville performers of the early 20th century that really brought the instrument to the fore. Credit for this goes mostly to Leon Weaver who toured the vaudeville circuit with his “Weaver Brothers n’ Elviry” act. His sister-in-law, June Weaver, made two important changes. Instead of the standing posture where the saw-handle rested on the floor, she played the saw while seated. The seated position put the saw-handle between the legs thereby facilitating the tremolo effect. She is also cited as the first to use a bow instead of a mallet.

Perhaps the saw is too big and scary for you, then how about a Flexatone? The Flexatone was introduced in the early 1920s and uses much the same principles as the singing saw. The instrument consists of a piece of sheet metal surrounded by a wire frame and handle (Figure 3). Attached to the free end of the sheet metal are two pieces of spring steel. Attached to the free end of each of those is a wooden knob. The instrument is played by waving it up and down causing the knobs to act as beaters upon the metal sheet. The tremolo and the pitch of the tone produced are controlled by using the thumb to bend the metal plate.

The first time I ever heard (or even heard of) a Flexatone was many Christmas times ago. There was a Salvation Army bell-ringer in front of a store. Instead of a bell, he was using a Flexatone and was playing the eeriest sounding Christmas Carols. I sought out the sound, found the player and he gave me my first introduction to this strange instrument.

So until I “saw” you again, please stay tuned.