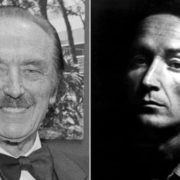 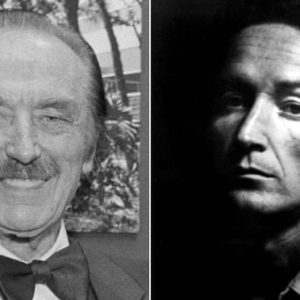 I finally caught up with the American Masters’ tribute to Woody Guthrie, made in 2006 and just rebroadcast on the small PBS educational outlet KLCS (the LC for “Learning Channel”). So what did I learn?

The ultimate outsider has now become so much a part of the American iconography machine that it almost makes one wonder what all the fuss was about. With Bruce Springsteen heading a cast of hi-placed hagiographers, from Time Magazine’s Joe Klein (author of Woody Guthrie: A Life), to a kinder, gentler Pete Seeger than the one who told HUAC to go to hell, to Smithsonian Folkways‘ bearded archivist Jeff Place, to Woody’s Praetorian Guard daughter Nora Guthrie, it became clear that in this sanitized Americana portrait of a take-no-prisoners, no-holds-barred radical American artist, all of the controversies that made his hometown of Okemah, Oklahoma refuse to honor or memorialize him in any way were safely nestled in a distant, dusty past-long burned-out coals that had been raked over so many times there was no danger of picking one up and finding that its still-smoldering underside had burned your fingers to a crisp.

Albutnotquitemost, as the tmesis-loving e.e. cummings once wrote, because I do know what all the fuss was about, and why there is another, more dangerous and far more interesting portrait of Woody Guthrie still strumming away in the background, still capable of being shunned by the powers-that-be, marginalized by the gatekeepers of American culture, and written out of the history books of American popular music.

This is not the Woody Guthrie of This Land Is Your Land and So Long, It’s Been Good To Know You, of The Reuben James and Take You Riding In My Car, of even the hard-traveling dustbowl balladeer-the subject of this nostalgic homage that airbrushed out Woody’s post-World War Two songs and hard-hitting Depression era prose.

Rather it’s the Woody Guthrie that Wobbly troubadour and raconteur Utah Phillips rediscovered and revived in 1991, when he was searching for the most powerful anti-war songs he could find to bear witness against the War in Iraq-not G.W. Bush’s bad war of 2003-2009, but the good war staged by his father Bush 41, the one who drew the line in the sand and lit up the sky with bombs over Baghdad.

The late Utah Phillips, this old Korean War veteran remembered what Woody had to say about that war, the one in 1950, when Guthrie had not yet succumbed to the ravages of Huntington’s Chorea, and at the tail end of his songwriting career crafted the most powerful antiwar and anti-imperialist song of his life.

It was so simple, so direct and right on target that Utah summed up his whole album with Woody’s four-word title: I’ve Got to Know.

Why do your war ships sail on my waters?

Why do your planes drop bombs from my sky?

Why don’t your ships bring food for my children?

Hungry lips ask me wherever I go

Comrades and friends all falling around me

That Woody Guthrie would still have ruffled feathers in 2006-I mean the feathers in Congress which funds PBS-the year that Neil Young wrote Let’s Impeach the President, with a song as contemporary and subversive as any on Neil’s antiwar album Living With War.

But that Woody Guthrie was nowhere to be found on this authorized profile of America’s greatest folk singer. Nor was the Woody Guthrie who wrote the following words (quoted from Hard-hitting Songs for Hard-hit People, Oak Publications, 1967):

You Low Life Son of a Bitch

You low life son of a bitch

You selfish, greedy, low down thief

That’s what I call a greedy rich thief

Now what do you think about that?

You swine, you filthy hog

No wait, that ain’t enough.

You worshipper of greed and the devil

Who are you and where are you?

You stool pigeon for the greedy side

You bodyguard of the bigshot lord

You worshippers of riches and greed

You know who you are.

That’s the Woody Guthrie who refused to declare his religion to the hospital admitting clerk, insisting it was All, and when she wouldn’t take no for an answer, filled out the blank with All or None.

That’s the Woody Guthrie who lived in a tiny one-room woodshed on Will Geer’s property in Topanga Canyon, when all the NYC beneficiaries of his songwriting legacy went back to their colorful, comfortable Greenwich Village apartments and booked their next appearance on ABC’s Hootenanny.

That’s the Woody Guthrie who responded to the LA society hostess who refused to let black blues artists Sonny Terry and Brownie McGee walk through her front door when she had booked the trio for after-dinner entertainment during the war by ripping the table cloth from under her champagne glasses and before they left telling the crowd, “This was against fascism has got to start right here at home.”

That’s the Woody Guthrie who refused to dress up like a hillbilly for the Rockefeller Center booking agents who wanted him to play the country bumpkin for tourists, walked out on them after a one-song audition, gave up a week’s salary and left swinging a gallon jug of wine around his head for payment.

That Woody Guthrie is a pure, unfiltered, unsweetened, unvarnished, uncensored 100% American original, and you wouldn’t even get a whiff of him by watching PBS American Masters.

But you can still find him in all his quirky, unassimilated, obscene glory between the pages of a dozen books and a burlap bag full of Folkways Records (now available on Smithsonian Folkways Recordings).

Better yet, you can find him in a privately produced tape cassette of Utah Phillips, I’ve Got to Know, and on a hundred American street corners like the one at Laurel Canyon and Ventura Boulevard every Friday night in Studio City, where several dozen sign-waving antiwar protesters and a few folk singers who call themselves Neighbors for Peace and Justice have kept a vigil since the night before the first bombs fell on Baghdad.

Ross Altman may be reached at greygoosemusic@aol.com. Ross will be performing at the 50th anniversary of the Topanga Banjo and Fiddle Contest on Sunday, May 16. On Saturday evening, July 17 Ross will be giving a concert in the Gelencser House Concert Series. For complete schedules see their respective web sites.