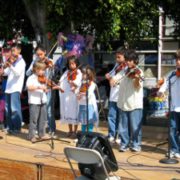 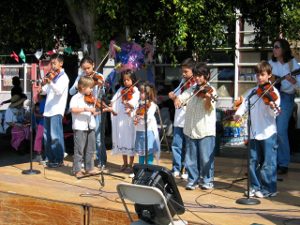 This May is the 57th Topanga Banjo Fiddle Contest/Festival, an amazing lifetime for any festival (whose normal life expectancy is a few years). Four years ago, I wrote up my ideas what it takes to keep an event alive in this column. I still would write the same thing now, except that I now realize that I described more the short-run concerns for an organizer: what to look for in bands, designing contests, jams. Those decisions affect the contest for years, but what about decades?

Clearly, the first issue is generational turnover among the organizers. If there weren’t some key organizers two generations younger than the founders, things would look bleak. A conversation with the new volunteer coordinator, Kayli Blundell, about musical communities made me rethink the long-run issues. Eventually it is about having a musical community (or rather, multiple), a social phenomenon well beyond a single event. Without those musical communities, jamming and contest would disappear and TBFC would become indistinguishable from a more commercial festival with separation between performers and audiences and probably wither away.

Kayli is interested in playing banjo herself and has young children just about old enough to learn playing themselves. That actually is a great time to have an impact in the community through local schools and sports clubs that affect more than one age group. I took over the talent coordination (scheduled performances) for the festival at about the same life stage, and I started more local activities. I think the latter made a big impact in our community at that time and indirectly supported the festival as well. It also is replicable and does not take a huge effort, although a persistent one.

The starting points for me were local elementary school events and fundraisers that spent substantial amounts on hiring professional entertainers. Could it be done internally, even if amateurishly, more involving the local community? The answer is yes, as long as you ask around: there are plenty of closet musicians who would be happy to come out (if you page back to my column last month, even at the workplace). Next, how to get the kids (elementary schoolers) involved? In year 2, I started an afterschool fiddle class to prepare kids for Cinco de Mayo. Our local elementary school is a lower income (Title I) and predominantly Hispanic school, and that was the main event. I couldn’t take total beginners, they have to have had some basics, but Santa Monica schools start an instrumental program in grade 4, so by spring, I could work with 4th graders. 5th graders were better, because we are playing real music, so it is a big step up from school music program. Small group initially, but the principal joined on guitar for the performance.

There were ups and downs in attendance from year to year, but we averaged maybe 8-10 kids per year. Since it is a neighborhood school, it started to permeate the neighborhood. And parents started to get interested again, many obviously had played as children and now got back into it. Others finally found the courage to pick up an instrument.

While you often hear the platitude about “music is a universal language”, it doesn’t work that way. In order to have any musical interaction, there has to be some common repertoire and skill, so rather than universal, think more about a very narrow dialect. I initially thought about old-time tunes, but actually found Southwest Fiddle more suitable in our context. Some background on that style, as well as the first two tunes I would always teach, are here.

I did that for a number of years, but eventually I stopped doing the class as my kids had gone on to other schools, the principal changed, and it always was a bit of a struggle against the music teachers (who like this in principle, but not in reality because it distracts from what they want to do and feels like a competition, especially to private teachers). However, after a few years of doing the classes, neighborhood backyard parties started to look like this —

So over time, an initially narrowly targeted activity (enable kids to play at their school fundraisers) grew well beyond it. It was reflected among contestants at TBFC and jam circles, and there still are a number of regulars at TBFC who got their start through Southwest Fiddle. Eventually, it petered out again as the no-longer-kids moved away, but it probably left a longer lasting impression and those ideas will get revived in other places. The long-run survival of TBFC depends on many similar musical communities that come and go.

I’ll be off to Europe for much of the summer, probably very musical content there (although I never know). I’ll be working on other activities for other blogs, so it will be a while before the next column.