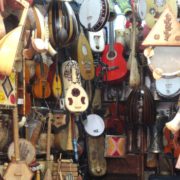 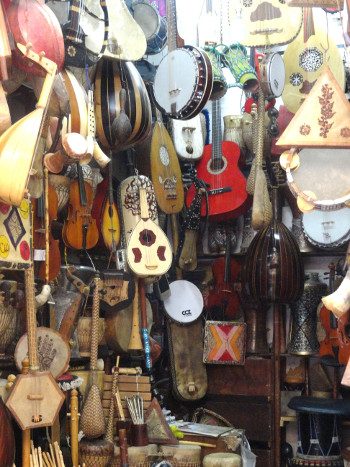 If you are a musician of any sort, you own music stuff. Musical instruments, parts, CDs, records, tapes, strings, straps, stands…. well, you get the idea. And it is very easy to let this stuff accumulate, until your music closet (or room or studio) looks like one of those reality hoarder shows. You need one item, and an hour later you emerge with lots of things but not what you are looking for. What to do?

By stereotype, musicians are not the most organized group of folks. I recall the banjo player who held his case together with an old belt. It had only been several years since the case had fallen off a bus in a third world country, and he was definitely going to fix it soon.

If you own a musical case that is broken, you have five basic options. Repair it yourself, pay someone to repair, use it broken, throw it away or give it away. Those options work pretty well with other issues.

So open your closet, room or studio, and go through everything. This is the scary part we put off for as long as we can. But it is the essential portion of the process. Once you are involved in this part, the rest is pretty easy. And since going through everything can be daunting, take it in steps. Maybe set aside two hours every weekend until you are done. Maybe you need the assistance of a friend or family member. This help is very important in the “do I keep it or not” section of this project. Maybe three piles: keep, don’t keep and I’ll decide later. If you don’t play slide guitar anymore, do you need 28 slides? If you no longer use a capo on your guitar, do you need four of them?

The biggest issues tend to surround the area of cost. Did you pay four times what you can get for this old musical instrument? Are you unwilling to “lose” 40% of your investment? One way over this hump is to assess how long you owned the object, and whether it was something you used a lot. The $500 banjo that is now worth $200 may be just fine if you owned it for 6 years and played it at a lot of gigs but have a newer or better one that puts this instrument in the closet. Like the advice given to those cleaning out their clothes’ closet, if you haven’t worn it for a year, you’re probably not going to wear it again, and you probably won’t play that old banjo again. Or perhaps worse: you’ll play it because you don’t want to “waste” it and in doing so ignore that newer or better one.

There are plenty of reasons to retain items. You own a beautiful vintage Martin, but the value of the instrument worries you when you play outdoor gigs or on tiny stages with a full band. Owning a second guitar, or “beater,” make perfect sense.

I am apparently a puritan by nature, so when I have instruments or equipment sitting unused, I feel bad about it. This can lead to bad decisions, though. I left a position playing bass with a bluegrass band, then didn’t play any bass gigs for about a year, so I sold my bass. A couple years later I landed a job playing bass in a country band, and had to buy a new (to me) bass. I probably should have kept the first one.

The options of what to do with your “excess” musical stuff are pretty limitless. In today’s world, selling musical stuff is easier than ever. In the olden days, you ran ads in newspapers or musical publications or put stuff on consignment at your local mom and pop music store. You could reach hundreds (maybe) of potential buyers. Now with internet sales, you can reach thousands of potential buyers worldwide. You can attend shows that are specifically designed for musical instrument and accessories to be sold. You can donate useable stuff to organizations that provide musical instruments and accessories to American military members. You can donate to schools or local organizations. If your donation goes to an approved non-profit organization, you may be able to have a tax write off as well. And there are a lot of valuable organizations, especially now that the economy has caused many school districts to drop or limit music classes.

My recent foray into the closet of doom resulted in three instruments going to consignment. I donated three instruments to a performing arts school. I gave away a lot of accessories that I don’t think I’ll be needing. And at least for the short term, I have a much better idea of what I own, what I use and what I didn’t really need. And I can fit stuff into my newly neatly cleaned area.

Support live music, tip the wait staff and keep your nose clean until next time.