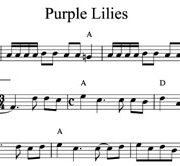 El Churrumbé is a dance tune from New Mexico and I found it on several field recordings. It is an extremely easy tune to teach and yet fun to play. The only more recent commercially available would be by Jenny Vincent, entitled Spanish American Dance Tunes of New Mexico, although she plays it a little different and very slow. However, you can listen to it as it is being played in some jam sessions on YouTube (so check them out before looking at the sheet music). Another important source of tunes from New Mexico was Cleofes Ortiz, who was born in 1910 on Pajarito Plateau near Rowe, New Mexico, and began playing for dances in his teens. He stopped playing in the 1920s until he was rediscovered 50 years later. PBS did a documentary on him entitled Violinista de Nuevo Mexico, which includes some of the tunes that are often played, and which is available as I’m writing this on YouTube. The only source to buy a CD of his playing would be Bayou Seco.

Purple Lilies is one of the best known tunes from Arizona, thanks to the efforts of Bayou Seco (Ken Keppeler and Jeanie McLerie) of Silver City, New Mexico, who have kept that style alive and brought it to new players. You can find lots of versions of Purple Lilies on YouTube. The main source is the fiddle band music of the Tohona O’odham people of Southern Arizona. Utilizing instruments originally introduced by Spanish missionaries, the fiddle band sound is an unusual mix of polkas, two-steps, and mazurkas utilizing violins, guitar, and drums. One great CD is by the Gu-Achi Fiddlers, entitled Old Time O’odham Fiddle Music. It is not virtuosic and the fiddles are on the scratchy side, but the exuberance and more than compensate. This distinctive twin fiddle style eventually changed into a newer Native American style known as chicken scratch or waila (which replaced the fiddles with a saxophone and electric guitars).

Every spring, I teach these tunes in an afterschool class at a local school. I practice with students for a few weeks and teach them about 8-10 tunes by ear and then they perform at the Cinco de Mayo festivals and the Topanga Banjo Fiddle Festival. Aside from El Churrumbe and Purple Lilies, the other tunes are usually from the playing of the Gu-Achi Fiddlers and Cleofes Ortiz and they sound authentic enough for a Cinco the Mayo fiesta, especially when supplemented by a classic like Cielito Lindo. So, yes, maybe it is cheating a bit, but that way students learn an authentic traditional fiddle style.

You can hear more of this in the Eucalyptus Grove at the Topanga Banjo Fiddle Festival on May 16.