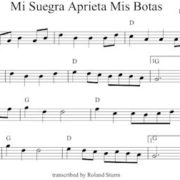 It is still early in the year, but now is a good time to learn tunes for those jams in May (you’ll be able to put them to good use at the Topanga Banjo Fiddle Contest and Festival). Check out my column from last May/June 2010 about the background on Fiddle Tunes from the American Southwest and two classic tunes from the repertoire.

Every spring, I teach an afterschool fiddle class at a local school so that students can perform at various Cinco de Mayo festivals and school fund raisers. For our neighborhood schools, these May festivals are the most important fundraisers of the year, so it is a big deal if students can provide the entertainment.

In this column, I cover two tunes that the students will learn this year, one from the playing of the Gu-Achi Fiddlers of Arizona and the other from Cleofes Ortizof New Mexico. This is not Mariachi, which is a more recent commercial style. 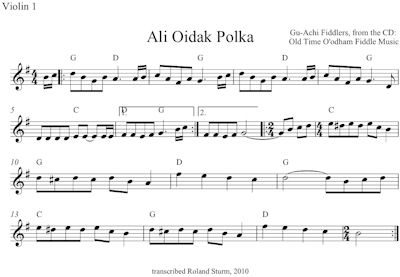 Ali Oidak Polka is the first track on the Gu-Achi Fiddlers CD, entitled Old Time O’odham Fiddle Music. It also has been reissued on the Smithsonian Folkways compilation Borderlands: From Conjunto to Chicken Scratch, which focuses on traditional music from Arizona to the Rio Grande valley of Texas. Very typical for the Gu-Achi Fiddlers, it is a somewhat crooked little melody that is easier learned by ear than from sheet music. 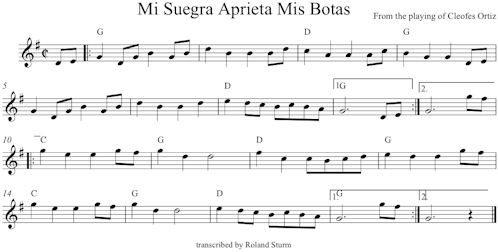 Our second tune is called Mi Suegra Aprieta Mis Botas. I base the transcription on footage from the PBS documentary about Cleofes Ortiz Violinista de Nuevo Mexico. Cleofes Ortiz was born in 1910 on Pajarito Plateau near Rowe, New Mexico, and began playing for dances in his teens. He stopped playing in the 1920s until he was rediscovered 50 years later. Who knows under what names you may encounter this straightforward melody, I’m sure it has traveled around, but this is the title Ortiz used. Nothing crooked here and very suitable for a dance. Indeed, the band in the PBS documentary played it for a social dance in New Mexico.

The Southwest Fiddlers will play more tunes of that style in the Eucalyptus Grove at the Topanga Banjo Fiddle Festival on May 15 and there should be plenty of jamming.