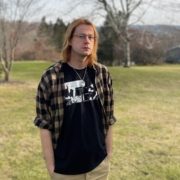 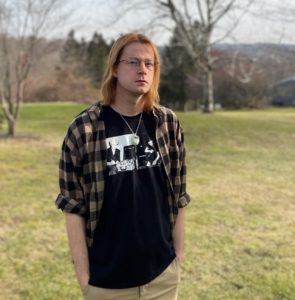 Derek Piotr (b. 1991) is a folklorist, performer and composer based in New England, whose work focuses primarily on the human voice. His work covers practices including fieldwork, vocal performance, preservation, and autoethnography; and is primarily concerned with tenderness, fragility, beauty and brutality. He has collaborated with artists including Scott Solter, Don’t DJ, and Thomas Brinkmann across various disciplines. His work has been supported by the North Carolina Folklife Institute, and has featured on UbuWeb and BBC.
Picture credit: Matty Bovan

It seems the past two years have been about surviving rather than thriving. So many folks I know seem to be learning timeless lessons about riding out the hard times as best they can and it got me reflecting on the overarching theme of this column: resilience. How have humans – not only during this era but throughout history– used creative outlets to express themselves and the everyday magic of being, even – and maybe especially – when times are hard?

I recently struck up a friendship with the brilliant folklorist and ballad singer Derek Piotr who is more than familiar with this phenomenon. His tireless work to not only preserve but spread the beauty of traditional ballads is centered upon the concepts of creativity and resilience.

L: How would you describe the significance of your work to someone who knows nothing about this tradition?

D: I would definitely argue that the songs I collect and study have been so widely sung for so long that they contain themes that would strike a chord with just about any casual listener. I also think a lot of the tradition-bearers lead lives that are hyper-ordinary; in this sense, they are exquisite examples of practicing magic in everyday life.

L: You point to something really beautiful when you speak about the “practicing of magic in everyday life.” Could you elaborate more on that? How have your consultants/informants addressed this, whether directly or indirectly?

D: I think part of the beauty of this equation is that the practitioners are actually keenly *not* aware of how wonderful they’re being. They’re fully day-laborer, working-class, but can still remember and perform the most beautiful, unearthly music. Just proves the point that you don’t need the acupuncture, the limo, the champagne, or the bowl of only blue M&Ms to be a conduit for the best music on the planet. Luxury or star power never factor in. That to me is so heartening.

L: That’s a really lovely thought. You don’t need all the fancy stuff to be a conduit for that celestial something, and more often than not it’s more impactful if you don’t have that stuff. Could you talk about this in the context of your recently released compilation? How do you see these people you “brought together” on this project as conduits of the craft you love so much?

D: I definitely think the subjects of Last Wisps of the Old Ways lead hard lives. I’m talking gimpy legs, frontotemporal dementia, electroshock, widowed twice over, you name it. And yet this music is so, to use your perfect word, celestial, and, in fact, can coexist alongside the hardship without ever once being sullied. It might even be because of the hardship – I think the quote goes: “where the shadows are darkest, the light is brightest”.

L: Tell me more about Last Wisps of the Old Ways. When did you start this project and how did Corona change or impact it?

D: Corona REALLY impacted this project. Initially, I was all set to visit the Library of Congress to hear these recordings in-person, but the date was fixed for something like March 17, 2020. Obviously COVID happened. So I took it upon myself to visit the family of the singers in North Carolina, as I was unable to do any other kind of in-person research, and that obviously ended up being incredibly rewarding and worthwhile. To not only meet but to record and ultimately form a close friendship with Lena Bare Turbyfill’s last living daughter, Nicky, who definitely was a trove of folklife and a dear sweet tradition-bearer. That’s something I could never have gotten in a library. Ultimately it became about braiding my recently-recorded material with the archival recordings.

L: Despite COVID and its isolating circumstances, you managed to develop an intimate relationship with the ballad-singing community as well as the broader folklorist community. Tell me more about that. How has that informed or been informed by your work? What ideas do you have about creativity, connection, and resilience moving forward?

D: Well it’s pretty ironic, right, that something this supposedly isolating has actually folded me in closer with folks in the last two years. I think folklorists have a totally vibrant, close-knit sort of intention when it comes to relating with one another – more so than the Instagram climbers, or whatever – we check in on each other in such a holistic and involved way; emails, letters, cards, phone calls, and, where possible, in-person hootenannies. It’s a very companioning way to be in touch with people in your field. Very academic in a way, but also completely casual – front-porch-swing type-stuff, right in your inbox.

The only way forward is to let both our struggles and triumphs enrich our craft. Despite learning this again and again from our consultant communities, folklorists have never had to do this on a mass scale. The Coronavirus pandemic forced us as our own community to think about how to persist and be creative in doing so. Individuals like Derek – both a practitioner and a folklorist of his craft – have learned this lesson well. While a person might specialize in ballad singing or basket making, the magic of the everyday is deeply woven into their specific practice. That magic is resilience itself. However it manifests, it carries us upward and onward, together.

“Our responsibility is to keep the idea of art wide and useful, so that the old man’s basket, the kid’s chopped coupe, the old lady’s beautiful kitchen composed of cheap goods, and our own earnest writings will be taken seriously. The job is to get up, go out, and find the things that will help us learn how others manage in the world we share. We need to meet them, joining in appreciation of their creations, in hatred of the forces that thwart them, overcoming our separation in a oneness of humanity.”

Celestial Wisps of the Ordinary