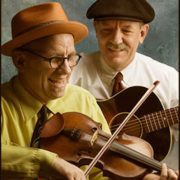 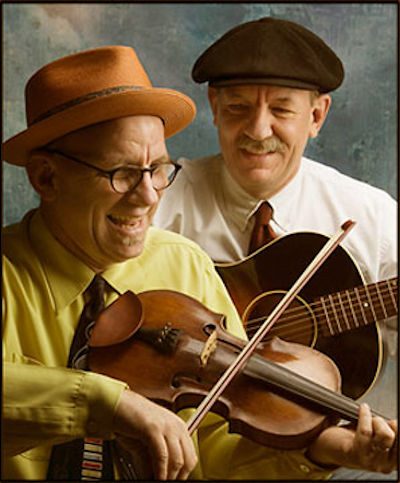 Early country music was a simple style with sparse instrumentation. The first commercial country music recordings in 1922 and 1923 by Eck Robertson and Fiddlin’ John Carson were either solo or duo recordings by fiddlers. Duo acts performing old-time country music were common, often featuring the uniquely blended harmony singing of two brothers were a common combination. One of these early acts, the Monroe Brothers, included the future “father of Bluegrass Music,” Bill Monroe. The Delmore Brothers, the McGee Brothers, and the Blue Sky Boys (Bill and Earl Bolick) were other popular brother duets performing and recording country music in the 1930s.

The twin brothers Jere and Greg Canote from Seattle continue that tradition. As they describe their music: “We are proud to think of ourselves as links in the chain of musical brother duets like the Stanley Brothers, the Blue Sky boys, Sam and Kirk Magee or the Everlys. But we are always amazed by the possibilities of a fiddle and a guitar, (and those genetically matched voices). While we have one foot firmly planted in the traditions of American Roots music, we certainly have an ear tuned to the novel and the quirky.”

Not exactly youngsters anymore, they have taken advantage of their genetics for as long as they remember; starting as Christmas elves tap dancing their way around the wishing well in the first grade. They have played an important role in the active old-time music scene on the West Coast through a string band class they have been teaching for more than 30 years. And apparently they still have fun with it: “We love the beautiful old fiddle tunes and the hypnotic ‘in the moment’ experience of playing this American Old Time music. We wish everybody could join us!”

In fact, this is possible in Southern California this month: The Canotes will be in Los Angeles for concerts and workshops at the 11th Ever Old-Time Social and the Topanga Banjo Fiddle Contest & Folk Festival.

Otherwise, their days of touring are long gone. Greg explains: “My brother and I refer to the years 1980 through 1984 as the Bad Old Day because we toured pretty incessantly for those four years.” And unlike Bill Monroe, who was seriously injured in a car crash, or Ira Louvin, who was killed, this Brother duet got away with a scare. As Greg tells the story: “After weeks without enough sleep, we continued to a show a show at the Carter Family Fold in Hilton’s, Virginia. Sandy [Bradley, a dance caller and guitarist who played with them] started driving, but after a couple of hours I noticed her eyes drooping, so we got Jere to take over. Well, he lasted a whole forty minutes. My turn!

I thought I did great for a little while, but I realize now that my judgment was impaired- every time I saw a sign for a rest stop and a chance to throw water in my face, I figured I could just keep going. That strategy caught up to me outside of Roanoke. As I topped the hill, I could see the bridge going over a deep ravine. By the time we were on the bridge, the car was full of sleeping people- including me! I awoke to us screeching in slow motion, into the guardrail, careening back into the other guardrail, back over in the other direction and up onto our right side, then coming to a stop. We seemed to be OK, although Jere had a cut on his foot.”

The car was totaled, but the instruments were fine. So they picked up a rental car in Roanoke and on to the next gig. Greg continues:

“The Carter Family Fold was a large wooden barnlike building with bench seating outside of Hilton’s. When Janette [Carter, the daughter of Sara and A.P. Carter and member of the Carter family band beginning in 1939] introduced us, she said ‘These fine people came an awful long way to play for y’all. In fact they were involved in a terrible accident, but they’re still gonna try and play.’ Play we did. But it wasn’t pretty. We got through a couple of sets and Joe [Carter, son of Sara and A.P., who also played with the Carter family in the 1940s] sang bass with us on Give Me Just a Little More Time. I know we sang it more than once, but boy, did we mean it!

The next day, we bought a car on a credit card in Bristol, Tennesee, sold our wreck to a junkyard, and headed up to Saint Paul, Minnesota to play on the Prairie Home Companion at the end of the week.”

Well, yes, touring as a folk musician is more tedious than glamorous. And the Seattle folk scene is better off having them do their regular course.