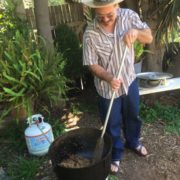 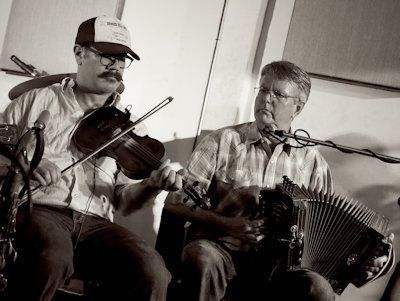 I have liked Cajun fiddle since I found a recording by the Balfa Brothers many years ago.

Like most folk music, it is raw sounding, harmonically simplistic, maybe even primitive style. But that is its charm and an antidote to overprocessed electronic styles. It is a fringy style that we don’t get to hear much in Los Angeles, but the High Life Cajun Band is changing that with house concerts, workshops, and, of course, their own performances.

The origin of Cajun music goes back to French settlers in Acadia, Nova Scotia. After being forced into exile by the British in 1755, some settled in Louisiana. Over time, square European rhythms incorporated African/Caribbean influences, and in turn influenced music and language of Creoles of African descent, giving rise to the related style of Zydeco. Neither Cajun nor Zydeco had a fixed identity, but evolved over time. Cajun initially was fiddle music, then the (even louder) accordion became dominant, then (after the Great Depression) the accordion almost disappeared from Cajun music and bands instead included steel guitar, bass, drums, mandolins like Western Swing in their lineup for 20 years, then the accordion came back. Dewey Balfa and his brothers, performing on the folk revival circuit in the 1960s, triggered a renewed interest in the folkier style.

Angela Wood plays guitar, triangle and sings in the High Life Cajun Band. And her house in Echo Park is where the action is. In early April, there were workshops in singing, fiddle playing, and a concert with David Greely, the founding fiddler of the Mamou Playboys. Soon to come: dancing and sausage making.

Angela describes the background of the house concert:

“The three of us [Ben Guzman, Jacob Pennison, me, Angela Wood] have traveled for several years together to Blackpot Camp and Festival in Southwestern Louisiana to immerse ourselves in Cajun culture – music, dance and cuisine. It’s not just about music there – you have to have all three and we kind of love that and want to bring that back to LA with us as much as possible. The music is about community. You hang out – cook, socialize, dance (because of all the eating), play tunes – just have fun. We met David Greely at Blackpot Camp – he taught me most of the songs I sing – and Ben took fiddle classes with him. We made a video about him as a promo for the Blackpot website (Ben and I are a video production team called Small Medium Large).

When David was coming to town, we figured we could turn our usual party space (a sprawling terraced yard and patio with a 1920s cottage and vintage trailer – pretty typical Echo Park) into a concert space that can seat around 30 people – and we filled it up! Of course we had to make a day of it by cooking a gravy that Ben started at 8am!” 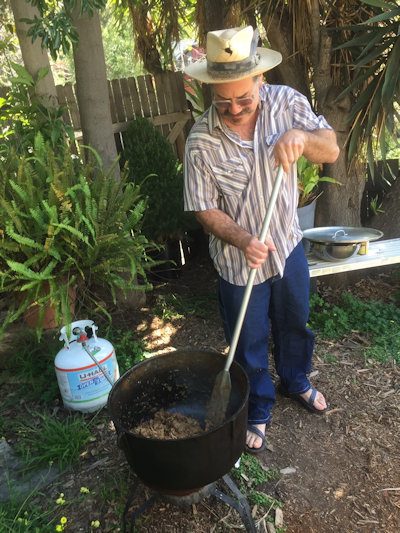 “Ben and I have also held Cajun sausage making workshops at our house where he passes down what he learned from Bruneaux Miller (Accordion builder Larry Miller’s son and father of The Revelers’ Blake Miller). He was featured on Anthony Bourdain’s show. We made a video about Bruneaux:

Next on High Life’s plan for Cajun Culture on the Los Angeles frontier is the dance scene. As with many traditional music styles, dance was a vital part of it. The Topanga Banjo Fiddle Festival this year will have a Cajun dance with live music by them. Yes, the festival is going to happen on its usual day, but with a slightly different layout after the fire destroyed the Western Town. Instead of a dance barn, the dance area will be moved to the Eucalyptus Grove and you can hear the Cajun High Life Band at 3pm, even if you don’t want to dance:

But Angela would argue you should give it a try:

“We are looking dancers to 2-step and waltz and are slowly building relationships with people who want to get up and dance. It’s such a vital part of why we play. It’s a great way to get exercise (work off some of that pork gravy!) meet people – get dressed up if you want or just come as you are.”