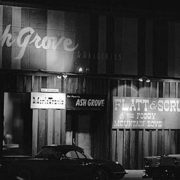 Bringing It All Back Home

We shall not cease from exploration

And the end of all our exploring

Will be to arrive where we started

And know the place for the first time.

Can you keep a secret? Here’s one you didn’t get from WikiLeaks, or Edward Snowden, or the NSA: Big Bill Broonzy (June 26, 1893 – August 14, 1958), who died just one month after Ed Pearl opened The Ash Grove on July 11, 1958, will finally get to play The Ash Grove on its 57th anniversary. It’ll take two white guys to make one Big Bill, but Dave Alvin and Phil Alvin do a great job recreating some of his classic blues songs on their recent Grammy-nominated Common Ground: Dave Alvin and Phil Alvin Play & Sing the Songs of Big Bill Broonzy, and they will be headlining the upcoming Ash Grove benefit concert to complete the documentary film about the greatest folk club of all time.

It will take place at The Improv in West Hollywood—which occupies the same space that the original Ash Grove did—the legendary address of 8162 Melrose Ave—which I did not look up; it’s emblazoned on my mind from all the years I attended what I once called The West Coast University of Folk Music. I’m a UCLA graduate, a UCSB graduate, and a SUNY-Binghamton graduate, but most of all, I’m an Ash Grove graduate—that’s where I learned what folk music is.

They had an illustrious faculty—Visiting Professors Doc Watson, Guy Carawan, The New Lost City Ramblers, The Greenbriar Boys, Mississippi John Hurt, Reverend Gary Davis, Lightning Hopkins, Phil Ochs, Dave Van Ronk, Ian and Sylvia, Mimi and Richard Farina, Ry Cooder, Sonny Terry and Brownie McGee, Mance Lipscomb, Son House, Kathy and Carol, Len Chandler, Pete Seeger, Joan Baez and Bob Dylan (which Ed Pearl produced, but had to hold at The Hollywood Bowl because their audience was vastly larger than could fit into the comfortable confines of his intimate supper club—where for $2.50 you could hear a great concert and have some delicious homemade food in the bargain)—a Who’s Who of modern and traditional folk. And, as I recounted in my 50th anniversary celebration of The Ash Grove, Bob Dylan still has Ed’s brother Bernie’s harmonica holder—which he loaned to Bob and never got back.

I think Bernie has since replaced it, because he will be co-headlining this once-in-a-lifetime benefit concert—with The Bernie Pearl Blues Band featuring Barbara Morrison—along with Broadside balladeer Len Chandler, the fearless Get Lit Players and The New Ash Grove Players featuring Claudia Lennear and SS Jones—an ongoing project of Ash Grove Music (see their website for further information). Bernie Pearl studied with many of the above-mentioned blues legends—whom he met in the Ash Grove dressing room after their shows—and recognized immediately how much they had to teach this aspiring blues singer and guitarist. He is now carrying on their music as well as creating his own in the great blues tradition. Ever in search of sources, Bernie has become a source.

Full disclosure: Len Chandler is a personal friend, so I am especially happy to see him on the bill. Just two weeks after the Ash Grove benefit Len will be performing in Newport, Rhode Island (July 25th) for the 50th anniversary of the Newport Folk Festival of 1965—the one where Bob Dylan plugged in, went electric, and folk rock was born. Len, along with many folk luminaries, performed at that festival and you will be able to see him right here at Bud Friedman’s The Improv on July 11—where Friedman and Ed Pearl are inaugurating a rebirth for the Ash Grove—like the Phoenix it will rise again on the ashes of the three fires that destroyed and closed down Ed’s original folk club. Friedman will be sharing the Improv with Ed, so that one night a month Pearl will book its own acts under the Ash Grove imprimatur. Over the past few years Len Chandler—who just celebrated his 80th birthday and looks as youthful as ever—has performed at Carnegie Hall (for the Lead Belly Centennial) and the Kennedy Center.

Len has been featured on national TV, and his music graced the soundtrack of last year’s Coen Brothers movie Inside Llewan Davis. But as always, he has also performed at less celebrated but more profound venues—such as the 50th anniversary reunion of the Student Nonviolent Coordinating Committee—SNCC—for whom Chandler along with Harry Belafonte provided essential financial support in the 1960s and a home for its beleaguered organizers to rest and recover in NYC before returning to Mississippi and risking their lives registering black voters. Len Chandler always walked the walk as well as sang the talk—he marched in the Selma to Montgomery voting rights march, recently portrayed in the movie Selma—sang old songs and made up new ones to help create the soundtrack of the civil rights movement. You don’t have to go to Newport to hear him; thanks to Ed Pearl and Bud Friedman you will be able to hear him right here at the new Ash Grove on Saturday, July 11, from 2:00pm to 4:30pm in a concert that will remind listeners why fifty-seven years after Ed opened its doors the Ash Grove has never been forgotten and still matters today.

It matters because Ed never saw music as mere entertainment; from the beginning this musical visionary saw and presented music as a part of social struggle and change—the aural portrait of what America could be—a multicultural nation of many voices, a rainbow of colors and sounds that reflected the roots of a democratic society. And yet, unlike many with a similar political perspective, Ed Pearl never compromised his standards of artistic excellence. He always presented the very best music out there—and as we get further and further from this folk music renaissance we see with even more vivid clarity how great this period of American music was—it can be built upon, but it has never been equaled, let alone surpassed.

That is why this documentary film is so important; with their memories still intact of those who were eye-witnesses to the history of great American folk music that passed through the doors of The Ash Grove it is time to put them on film and preserve them like any other great historical document—as a record for future generations to study and be able to pass on. You can therefore be a part of history itself, by supporting this benefit concert and acquiring a vibrant taste of what the Ash Grove in its heyday made available to Los Angeles audiences who attended it like pilgrims going to Mecca. It was no accident that even super stars like Mick Jagger could be found there—in the audience like an ordinary citizen, learning from the best and inspirational artists of the time—or any time.

“In my end is my beginning,” wrote T.S. Eliot in East Coker, the second poem of his Four Quartets, and Ed Pearl is the living testament to Eliot’s aging wisdom: “Old men ought to be explorers.” Ed has never stopped being an explorer.

When Pete Seeger passed away last year, who was there with the first memorial concert as enthusiastic as the kid from UCLA who started the Ash Grove in 1958—and brought Pete out here to perform during the height of the blacklist when no one else would book him—and when he couldn’t find a night club who would book him—started his own? Ed Pearl, that’s who. Ed is still fighting the good fight, still presenting the best music, and still dreaming up new ways to preserve it and celebrate what Aaron Copeland called the Fanfare for the Common Man. If you see one concert this year—this is the one to see. Like Dylan said on his fabled fourth album—the one with an acoustic side 1 and an electric side 2—Ed Pearl is Bringing It All Back Home—to 8162 Melrose Avenue.

Close your eyes and you may see Big Bill Broonzy. And don’t keep it a secret!

Los Angeles folk singer Ross Altman has a PhD in Modern Literature; Ross may be reached at greygoosemusic@aol.com