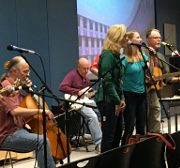 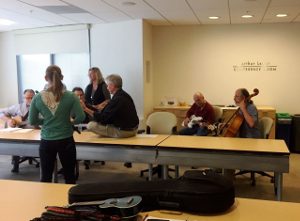 When “music at the workplace” means being forced to listen to a steady stream of sound, it can become very divisive and turn into a fight between proponents of diverse tastes. But as RAND’s Music Club demonstrates, music making at the workplace can be an activity that gives vitality and enthusiasm to a day in the office. I talked to the President of RAND’s Music Club, Paul Butler, and two other members of the club (Kevin Carmody and Andrea Golay) about the club. It may not work everywhere, but it is an idea worth trying in a lot more workplaces.

Roland Sturm: Paul, I see a lot of flyers about the Music Club, what do you do?

Paul Butler: I am a research administrator at RAND and started there more than 20 years ago. I soon discovered that RAND had a Music Club, which presented quarterly lunch-time concerts. I quickly signed up with my younger brother, Charles, to sing songs by the Beatles, Simon and Garfunkel, the Everly Brothers. In 2011, the president of the RAND Music Club decided to step down and I took over. While one of the main roles of the Music Club is to present quarterly concerts, its usefulness in introducing musicians to one another and affording them the opportunity to play music at work cannot be overstated. Andrea’s story below is a good example. It’s a welcome oasis in the middle of the day that both calms and rejuvenates. By now there are a good number of musicians who play music during lunch time in various conference rooms. I play with a larger group that meets every Monday at lunchtime, the Looming Spectors; the local bluegrass band rehearses on Tuesdays; the Irish band on Fridays. There are also the Uku-ladies and Gentlemen who play ukuleles in different ranges. The variety of music talent here at work is extraordinary.

RS: I would expect that there are closet players everywhere, but one wouldn’t even know about the hidden talents of colleagues at work. How do you get this started?

PB: Starting up a music club at work is easy. First, you do have to generate a bit of interest by discussing it with friends and colleagues at work – and presumably management to use facilities at work. Second, post fliers at the workplace stating that a Music Club is being formed, make a lunchtime concert or open mike the focal point, and people then can email/call you if they are interested. You want both “performers” and “audience members”. When they contact you, create two email list-serves: one for audience members and one for performers. After you’ve booked a room – not necessarily an auditorium – for your first concert, email the performers’ list-serve and ask the members if they would like to perform at the next concert. We call them “concerts” but they are just slightly better organized open mic events. Ask them to provide information on material and performance length – not everybody does a 3-minute song. I use this information to gauge how many performers I need to fill the hour. At RAND, the lunchtime concerts are popular, taking place in a 100-seat auditorium. You may start much smaller, but our music club has been around for a long time and really became part of the work place. Over the years we have been able to purchase a sound mixing board, microphones and stands, and two large speakers. Amplifying the sound is helpful but not essential. An “unplugged” concert would work just as well as long as people move closer to the musicians. As for the audience members, three weeks before the concert I send the audience list-serve a meeting invitation. A week before the concert I post fliers on the bulletin boards throughout the building and ask the performers to post the fliers in around their offices/cubicles. I book the auditorium for the four quarterly concerts at the beginning of the calendar year. 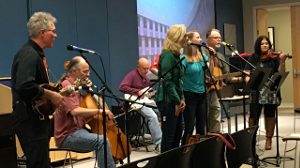 Performers at the 2016 Christmas concert.

RS: What is your own musical background?

PB: I obligingly took weekly piano lessons from the age of 9-12, but the real turning point musically was the arrival of the Beatles on the music scene in 1964. I was 14 at the time and immediately asked my parents for a guitar. The first real concert I went to was to see the Beatles at the Hollywood Bowl in 1965. After that I just kept up playing and singing those type of songs. I also enjoy choral music and am a member of the Mansfield Chamber Singers here in West L.A. At work, I practice with the Looming Spectors, working up popular songs like Nights in White Satin by the Moody Blues, Ode to Billy Joe by Bobbie Gentry, or Beatles tunes. Members change over time with some people leaving RAND and others joining the group.

RS: Kevin, you seem to be playing a lot of instruments in various groups at RAND.

Kevin Carmody: I started guitar when I was 12 and played lead guitar in a dance band while in college. After college, my opportunities to perform lessened greatly, and I spent those years learning to play a variety of other instruments. The music club here provided me with the chance to once again play with others, which had been missing from my life for so long. I had been at RAND for a number of years when Paul Butler approached me about playing the Dobro on a couple of songs that he and some other people were planning on performing at the Fall Music Club recital in 2010. Now I am playing with several groups here at RAND doing a variety of styles. Playing and performing with these amazingly talented individuals is an absolute thrill, and is just one of the many things that make working at RAND such a unique experience. No matter what else is going on in my life, I know that if my day includes rehearsing or performing, or even just jamming with these people, I’m going to have a great day.

RS: Andrea, you are relatively new to RAND and the music club there. What is your background and how did you get involved with the group?

Andrea Golay: I was a classically trained musician, starting on flute in elementary school and adding brass instruments in high school. I kept up with my music interests through college, including learning the Irish flute and penny whistle during a study abroad semester in Ireland. But when I graduated from college and joined the “real world,” I believed the fun was up and that performing music was a thing of my past. Before moving to Los Angeles, I worked as an operations research analyst at a US Army Center and I now do similar work as a technical analyst at RAND. My instruments stayed packed away for about seven years until I found the music club at RAND, which opened the door for a personal musical renaissance. I began playing flute again, helped start an Irish music group (a lifelong dream!), and even began developing my vocal skills. Our Irish group, Cardahlay, has been playing together for three years now. We are a small ensemble that performs traditional Celtic music with a fiddle, flutes/penny whistle, bodhran/guitar, and cello. We make a point to play at each of the quarterly RAND Music Club recitals, and perform noontime concerts in the main courtyard for St. Patrick’s Day. Playing with the RAND Music Club also gave me the confidence to start playing music semi-professionally outside of work. I recently began performing on trumpet and baritone horn with the Circus MissFits, an all-female circus/band ensemble that is run through Kinetic Theory Circus Arts. The group combines physical comedy, acrobatics, and music. Mainly, we perform in elementary schools around Los Angeles.