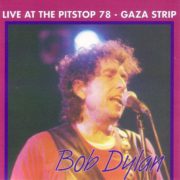 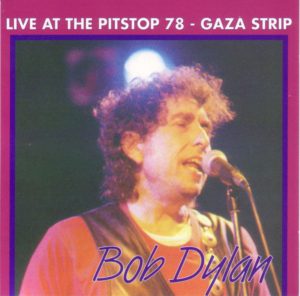 Think back to the first “Once upon a time” no—that’s not it—this song is three years older than that—and it starts with a question—not an answer. Something about “How many roads must a man walk down…before you call him a man?” Yes, that’s it—and it’s 1962—not 1965. That’s how long it took for Bob Dylan to get to Gaza—nearly 60 years—but here he is—at long last.

“How many seas must the white dove sail before she sleeps in the sand?”

In the meantime he converted to Christianity, became an orthodox Jew, went to Israel, sang at the Wailing Wall, and even bought a synagogue—but now he’s come full circle—and he’s back where he started—in the dark and dingy streets of—not New York City, but of Gaza—in the occupied territories of the Palestinian Authority—near East Jerusalem—where “I see my light come shining, from the West down to the East—where “Any day now, any day now, I shall be released.”

How do I know this? Since May 9, 2021, I have become friends with Rozan F Najjar, who lives in Gaza City. We introduced ourselves just the day before Israel started bombing Gaza—so I got a blow-by-blow—if one-sided—account of the war: “How many times must the cannon balls fly, before they’re forever banned?”

Long story short, last Sunday morning—August 1, 2021—Rozan asked me what I was doing, and I happened to mention what I do every Sunday morning—listen to Lisa Finnie’s wonderful show on Bob Dylan (KCSN—88.5 FM). When I next looked up at my computer screen this is what I saw:

I knew when I saw a new column staring me in the face. (Even in Gaza! I replied to Rozan—and thanked her for giving me a new idea for my FolkWorks column.)

Connect the dots as you will—now you know why Bob Dylan won—and was truly deserving of—the Nobel Prize in Literature. He’s always followed his own muse: His music is universal—and reaches beyond walls, past barriers, especially religious and ideological barriers, and into the hearts and minds and souls of everyman.

It is therefore no accident that Woody was his “first and last hero:” “Everybody might be just one big soul, well it looks that way to me, so wherever you look in the day or night, that’s where I’m a-gonna be, Ma, that’s where I’m a-gonna be.” Tom Joad was quoting Preacher Casy—and another Nobel Prize winner–John Steinbeck—and Woody Guthrie. And if anyone has carried that torch for the universal brotherhood of man in our own time—it is Bob Dylan.

That is why I resist the temptation to include Bob Dylan in the so-called Great American Songbook. His best songs transcend America—they’re larger than any single country—even a multi-dimensional country like the USA. That’s one thing the Nobel Prize demonstrates. The other is that Dylan’s songs don’t completely belong in any pop song collection at all—even the “Great American Songbook.” His songs have their roots in folk music and the blues—not pop standards.

Behind the question Bob Dylan asked, “How many roads must a walk down before you call him a man?” was the question Big Bill Broonzy asked five years earlier: “When will I get to be called a man?” Big Bill was an American in Paris at the time—a blues singer who preferred Paris because he didn’t have to confront racism at every turn. In America he was a custodian—in Paris he was a blues singer. And before Big Bill, Lead Belly sang John Henry’s “Lord a man ain’t nothing but a man.” Dylan was a white blues singer from the beginning—and that meant something. But not just the blues—he also knew the old Negro Spirituals—the forerunner of the blues.

If you just heard the music of “Blowing In the Wind” you would recognize the old anti-slave spiritual “No More Auction Block Over Me,” (Many Thousands Gone). Bob Dylan knew those songs—indeed when other Greenwich Village folk singers were writing songs about banning the bomb, Bob was in the New York Public Library doing research about the Civil War—that is why he made the brilliant substitution of “cannon balls” for “bombs” in the last line of the first verse. That time-consuming research made a difference in both his lyrics and his music. It gave his earliest songs historical resonance.

Even in his futuristic “Talking World War Three Blues” he winds up with a quote from the Civil War: “I think Abraham Lincoln said that” to set up the punch line: “I’ll let you be in my dream, if I can be in your dream—I said that.”

From Civil War America to the Occupied Palestinian Territory in Gaza: that’s a strange connection. That’s why I asked in my title: “Blowing In What Wind?” How do you get there from here? I didn’t know myself, until I got to know Rozan F Najjar. I wanted to know someone from that part of the world—someone who wasn’t just telling Israel’s story. And the only one who let me in was on my Facebook page—Rozan—whose description was—in Dylan’s words, “Right on target, so direct:” “Lives in Gaza.” Wow! She wanted to befriend me. I had met somebody. I clicked on “Confirm” and hoped for the best.

We’ve been friends ever since. She is a widow with three young children—one of whom is a son with medical issues. On May 14—right after Israel started bombing them—she sent me a photo of her home: 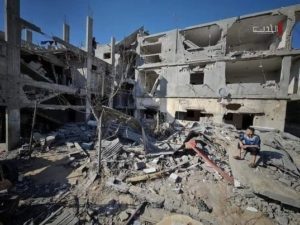 These be your Gods, O Israel? This wasn’t the “Land without a people, for a people without a land” I had been told about in the early days of the “miracle in the desert.” Who could write a song about this—I wondered—and could only think of one poet—who had already won the Nobel Prize. Surely he must have better things to do now. So in quiet desperation I went into my own song files, and rediscovered my old protest songs written during the Intifadas of 2009 and 2014—which I had never released. I decided to make a new record. But first I needed a new album cover—one that stood out as a symbol of antiwar protest for time immemorial—and which had already inspired my first song—Guernica:

The album named itself: Guernica to Gaza. I sent it out to my friend Frank Dorrel from Veterans for Peace and he made a contribution to Rozan and her children. The only problem is that so far I have not been able to send a copy of the CD to Rozan and her children—because the mail is not running within the Palestinian Occupied Territories. And we thought our mail was slow.

No sooner was my new album done—and finally released—than Rozan asked me what I was doing last Sunday—and followed up her question by sending me Bob Dylan’s Blowing In the Wind—from Gaza—complete with the Palestinian title. Who could write a song about this I asked—and sure enough the only name that came to mind had sent me his song!

May he stay, “Forever Young!”

Ross Altman has a PhD in Modern Literature from the State University of New York at Binghamton (1973); belongs to Local 47 (AFM); heads the Santa Monica Traditional Folk Music Club; writes for FolkWorks He can be reached by email: greygoosemusic@aol.com

Blowing In What Wind?